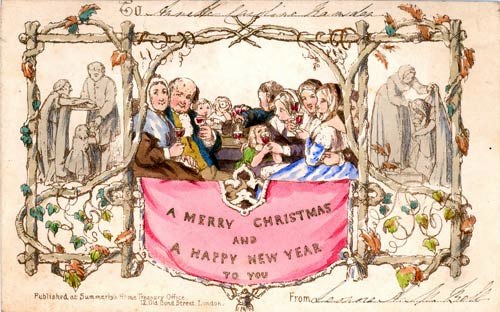 From 1843, one of the earliest Christmas cards

The tradition of sending Christmas cards began in the early 1840’s in England. The “Penny Post” system was instituted in England in 1840 and sending letters to friends and family became cheap and popular- so popular in fact that during the Christmas season of 1843 a well liked fellow named Henry Cole was buried beneath a mountain of letters, all of which he was expected to answer. From a history of the Smithsonian:

Cole hit on an ingenious idea. He approached an artist friend, J.C. Horsley, and asked him to design an idea that Cole had sketched out in his mind. Cole then took Horsley’s illustration—a triptych showing a family at table celebrating the holiday flanked by images of people helping the poor—and had a thousand copies made by a London printer. The image was printed on a piece of stiff cardboard 5 1/8 x 3 1/4 inches in size. At the top of each was the salutation, “TO:_____” allowing Cole to personalize his responses, which included the generic greeting “A Merry Christmas and A Happy New Year To You.” 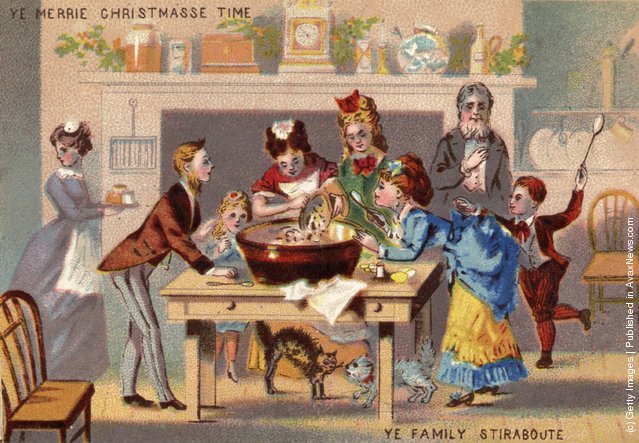 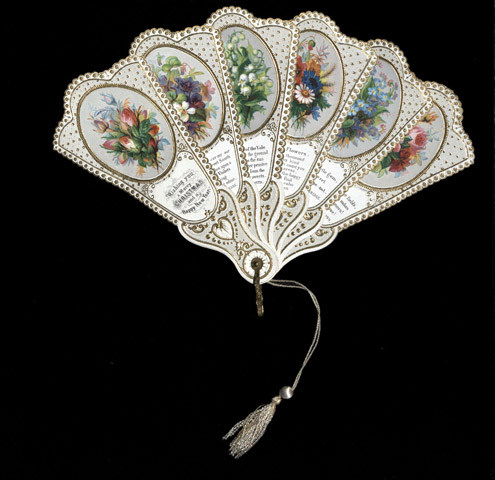 In the years following Cole’s card the tradition of sending of Christmas cards became firmly established in England. Many were very elaborate, like the fan above, and some were works of art. However the Victorian era had a dark side and its Christmas cards were often rather bizarre and eccentric. 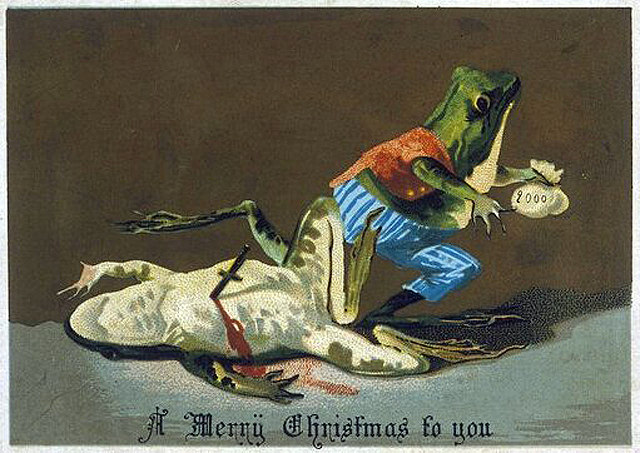 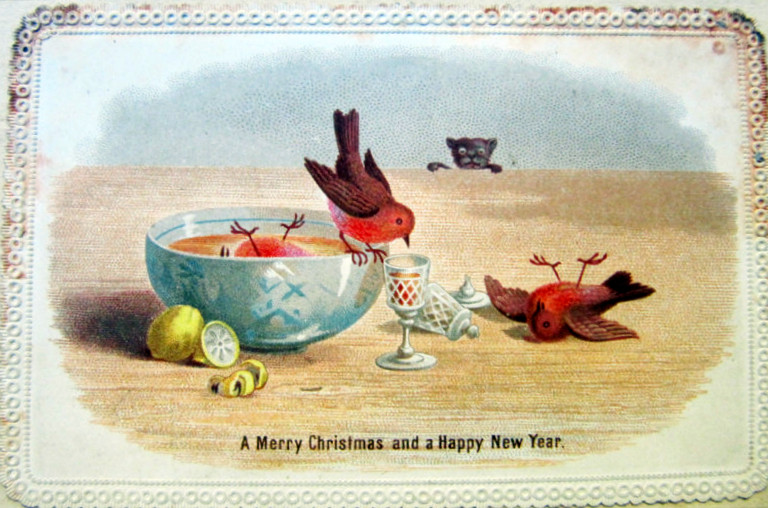 The cards above are from about 1880. The dead bird was a constant motif of Victorian cards. Some say it was just a way to wish the recipient good luck:

​Hunter Oatman-Stanford at Collectors Weekly noted that the birds are often robins and wrens, and that “killing a wren or robin was once a good-luck ritual performed in late December.” Specifically, the Irish St. Stephen’s Day on December 26 is known as “Wren Day,” with a traditional hunt of the bird (albeit now a fake one on a pole, although that wasn’t always the case). So receiving a card with the little prone bird, feet curled in rigor mortis, could be meant to wish nothing more than good cheer on the new year.

That certainly seems a stretch and how to explain the frog absconding with 2000 pounds after stabbing his unlucky victim? It is hard to find an uplifting message of any sort in the image of a recently murdered frog. 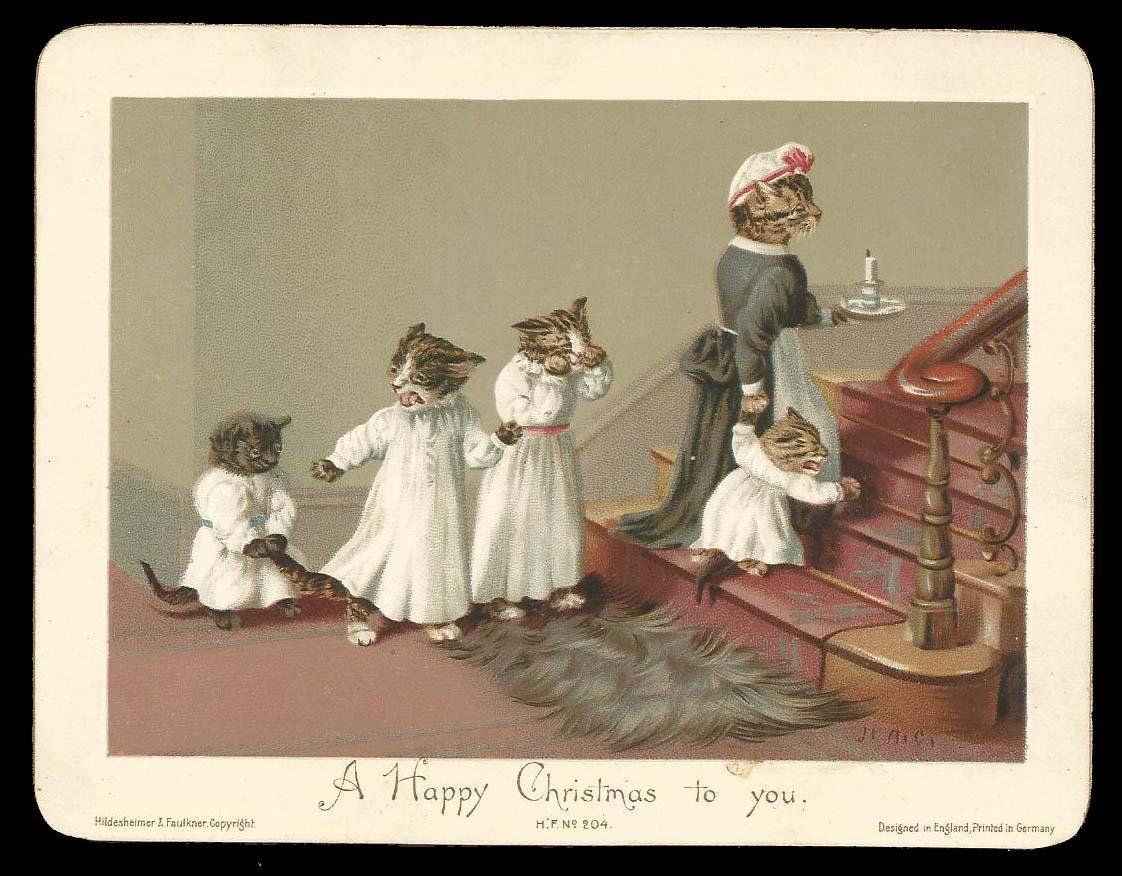 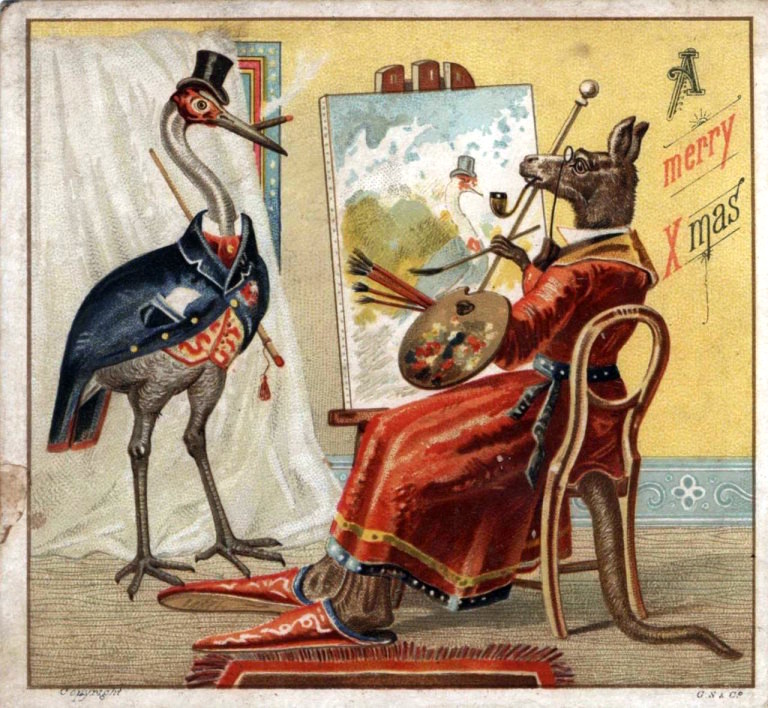 From the early 1880’s, one of the first Australian cards 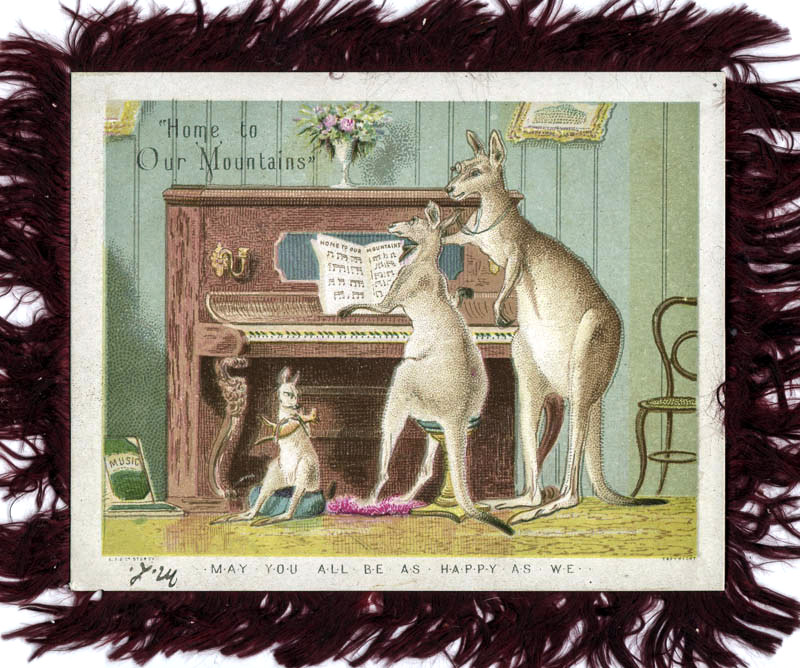 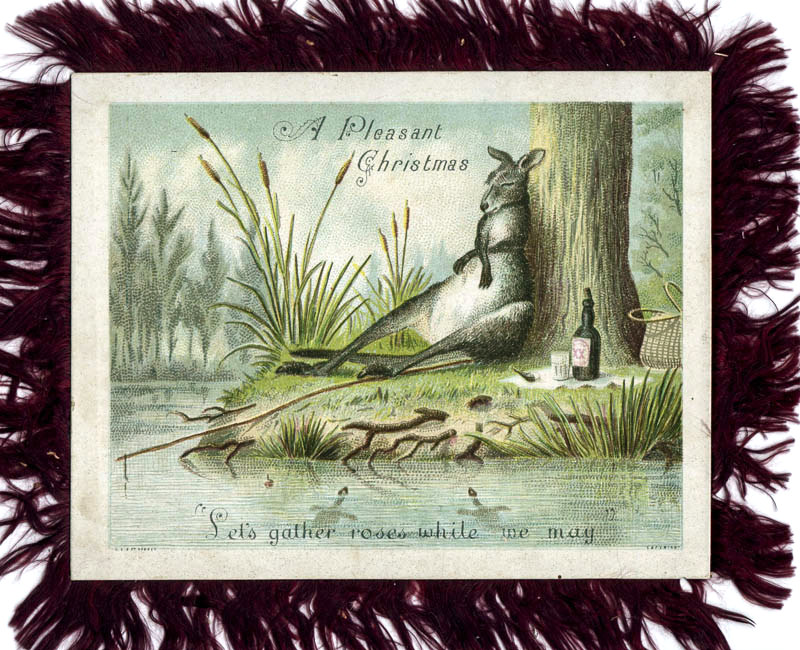 ​Australian cards of the 1880’s were usually cheerful and lighthearted, and most featured the lovable kangaroo or… 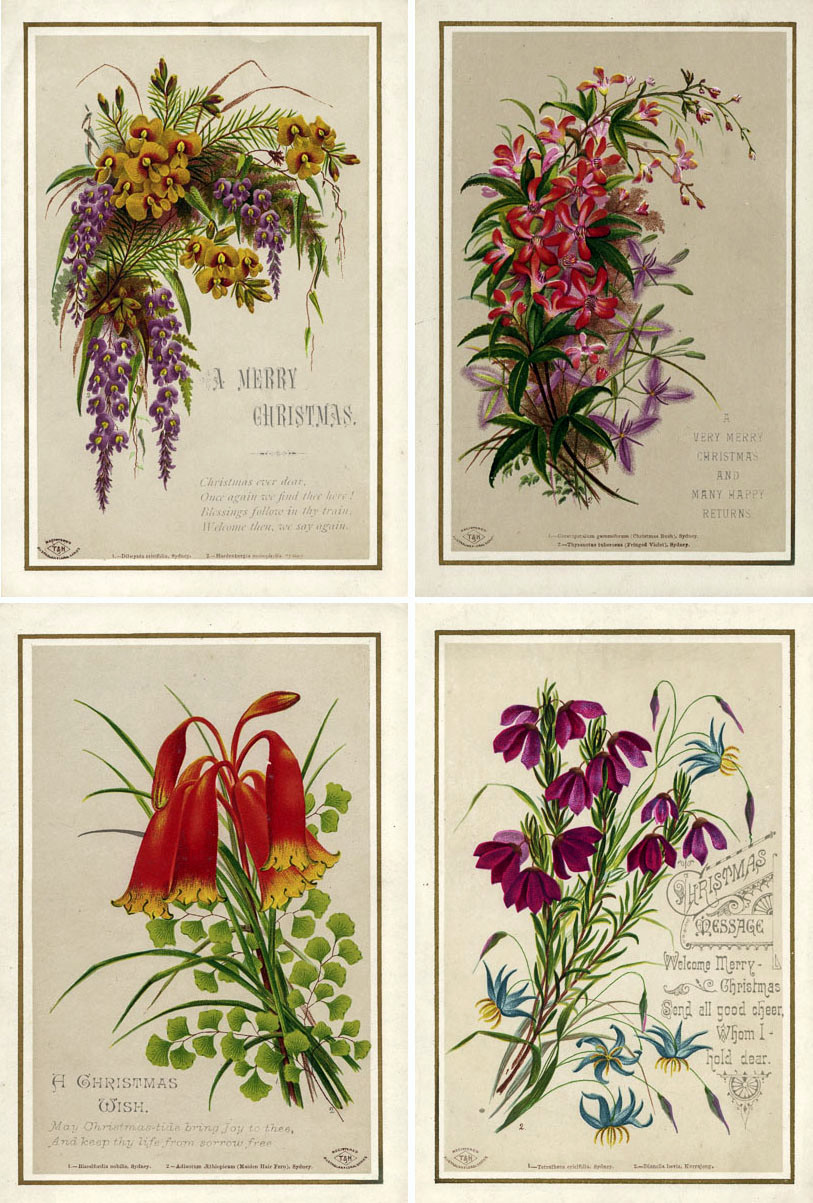 After the Victorian age, Christmas cards returned to a more traditional style like this 1905 card from Zurich depicting an extended family gathering. 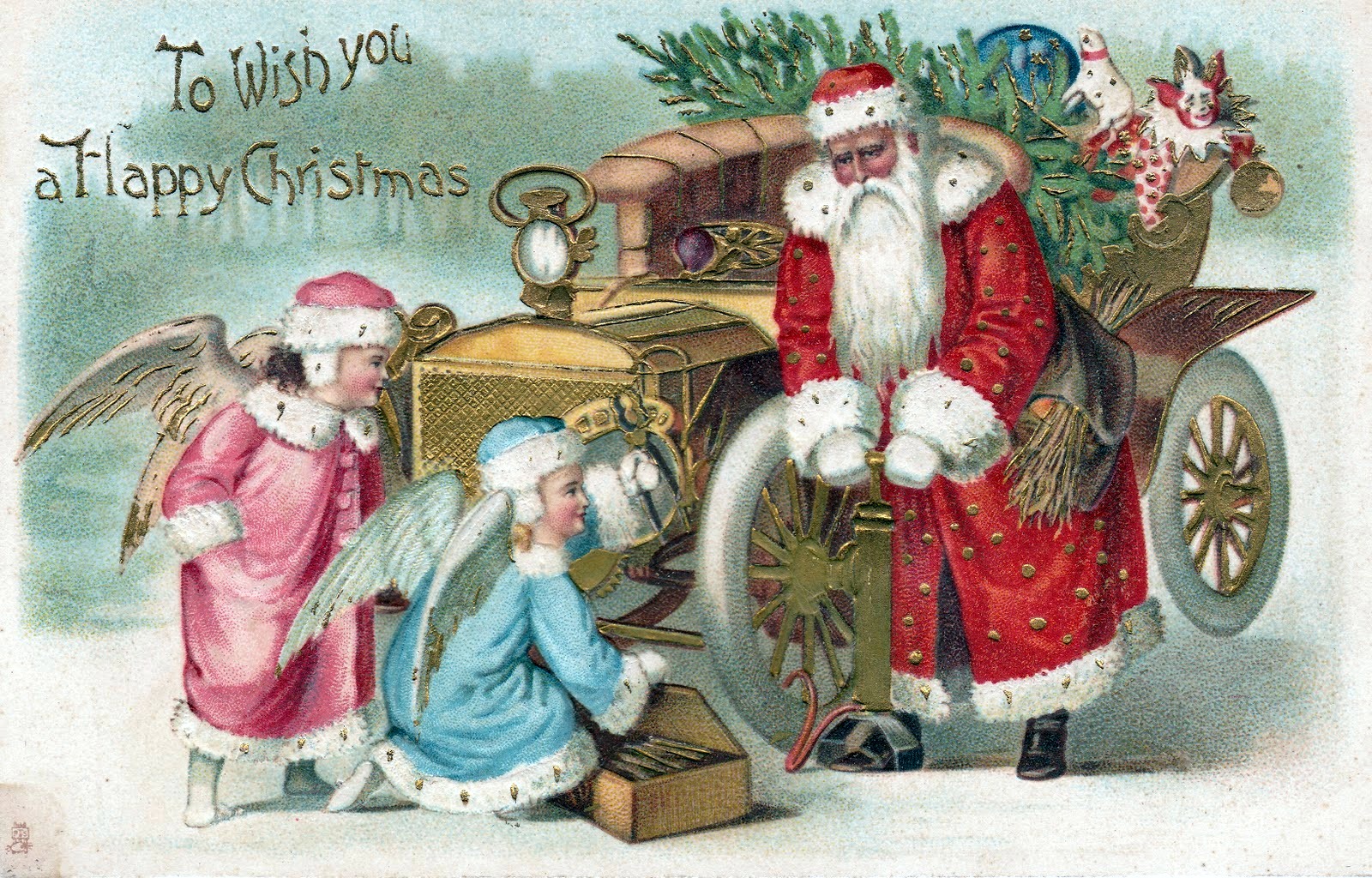 By 1910 Santa had ditched his sleigh and put the reindeer out to pasture. 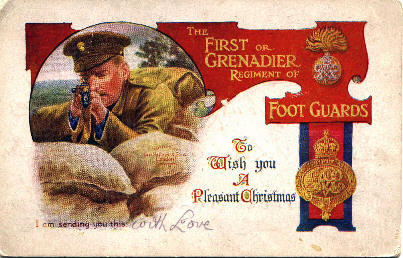 From 1915, a first Grenadier card, sent “with love” and wishing a ” Pleasant Christmas”

During the First World War Christmas cards had a decidedly martial theme. In this 1915 card the 1st Grenadier Division sends greetings “with love” wishing a  pleasant Christmas. This appears to be a direct order as the recipient is looking down the barrel of a Grenadier’s rifle. 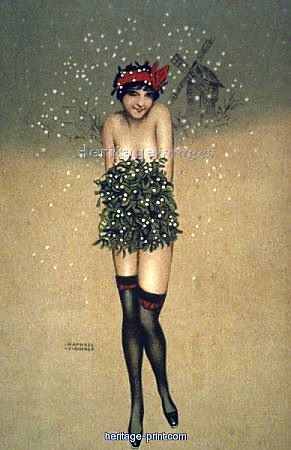 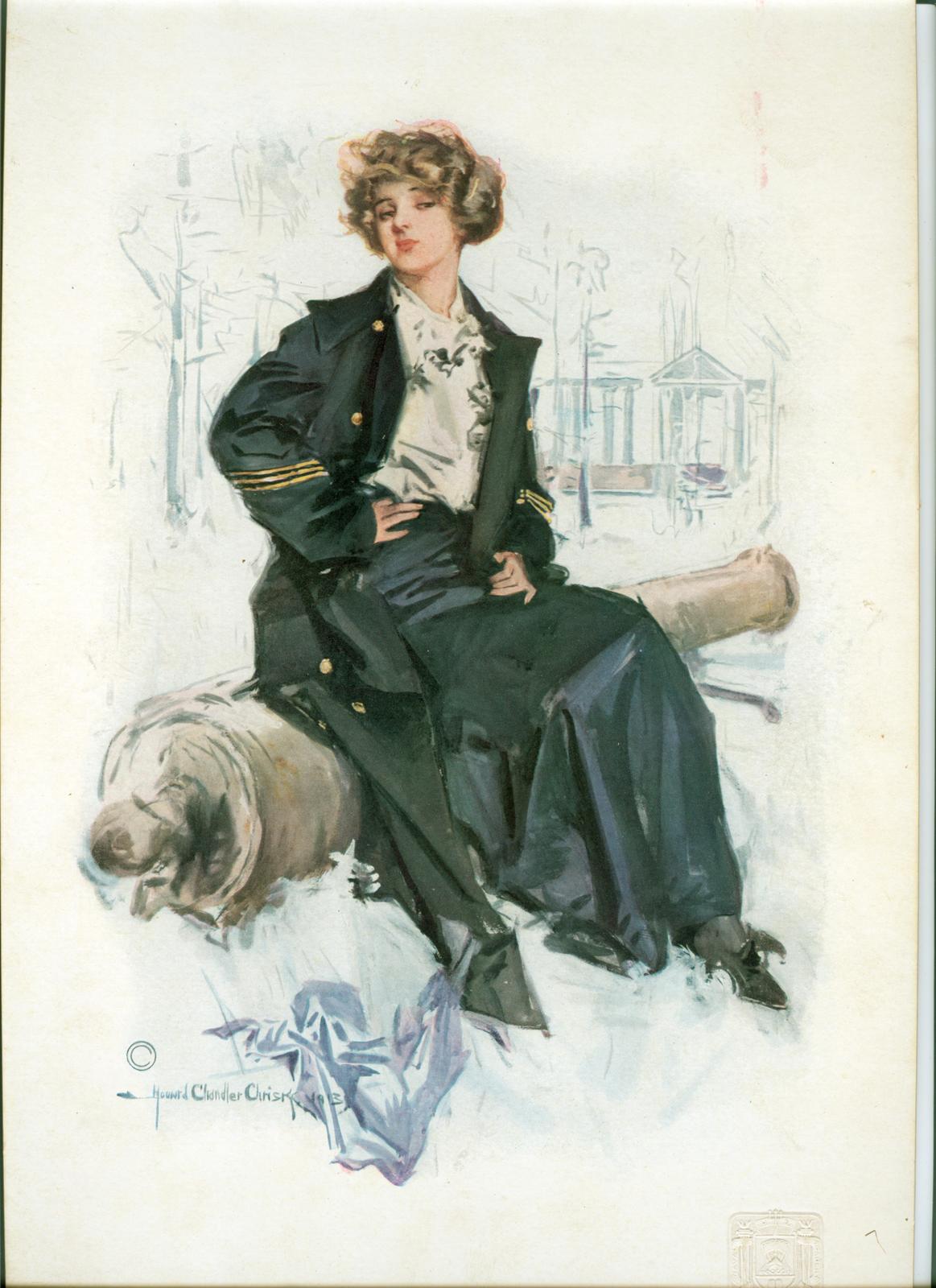 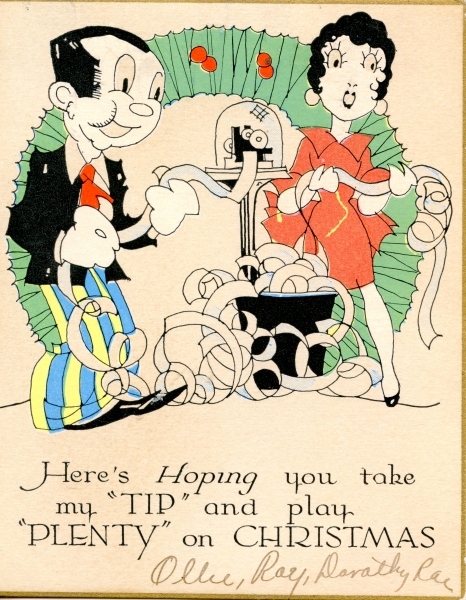 After the war came the roaring 20’s and skyrocketing stock market. Everyone with a few bucks or good credit was looking for tips on the next hot stock. They were happy to play the market because only a sucker would pass up the chance to become a millionaire. 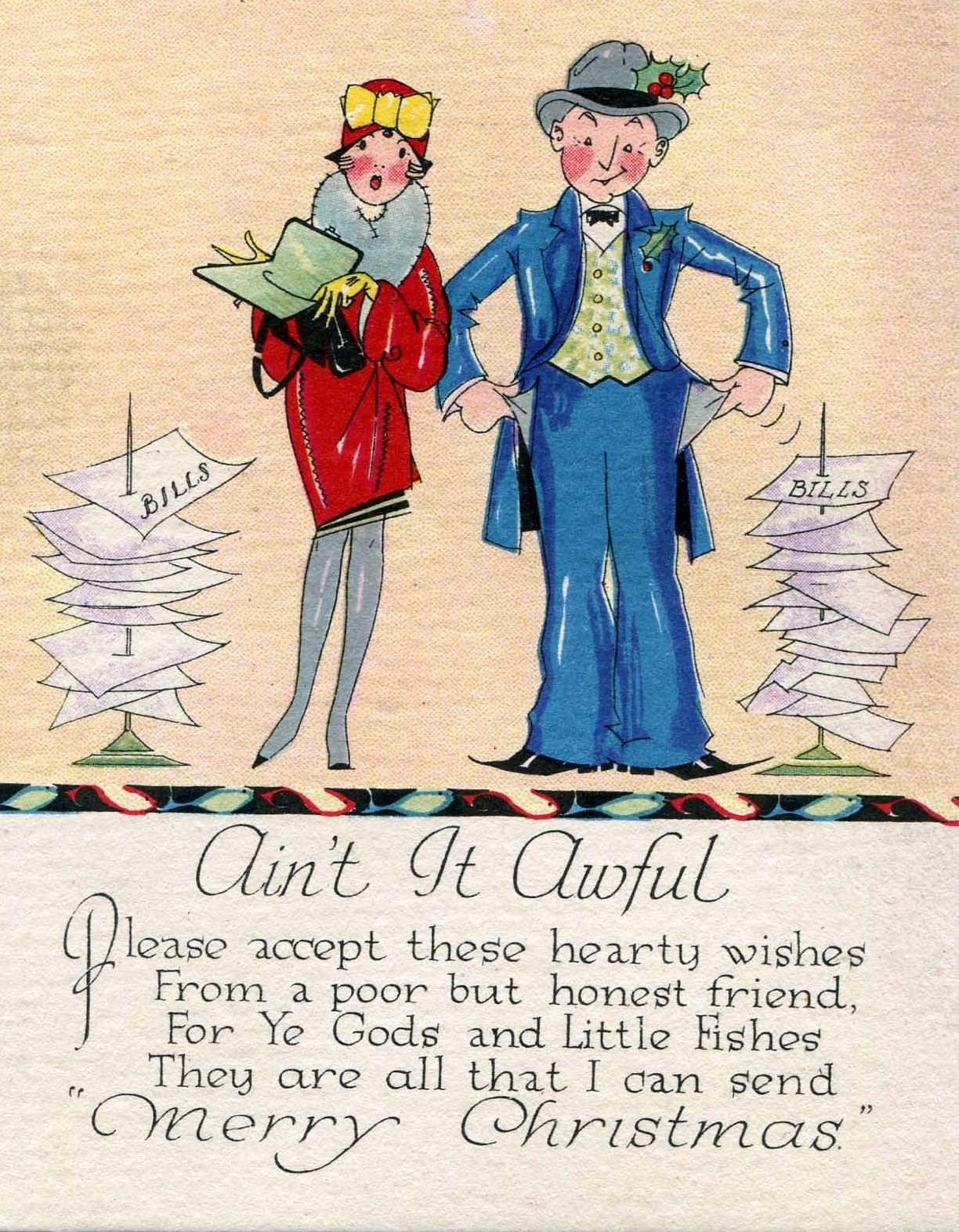 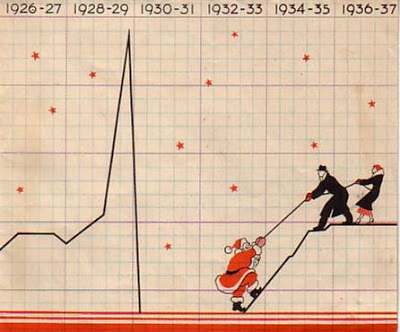 By the mid 1930’s, the millionaires were flat busted and Christmas cards ​reflected the sentiment of the times although it must be said many retained their sense of humor- it may have been all they had left. 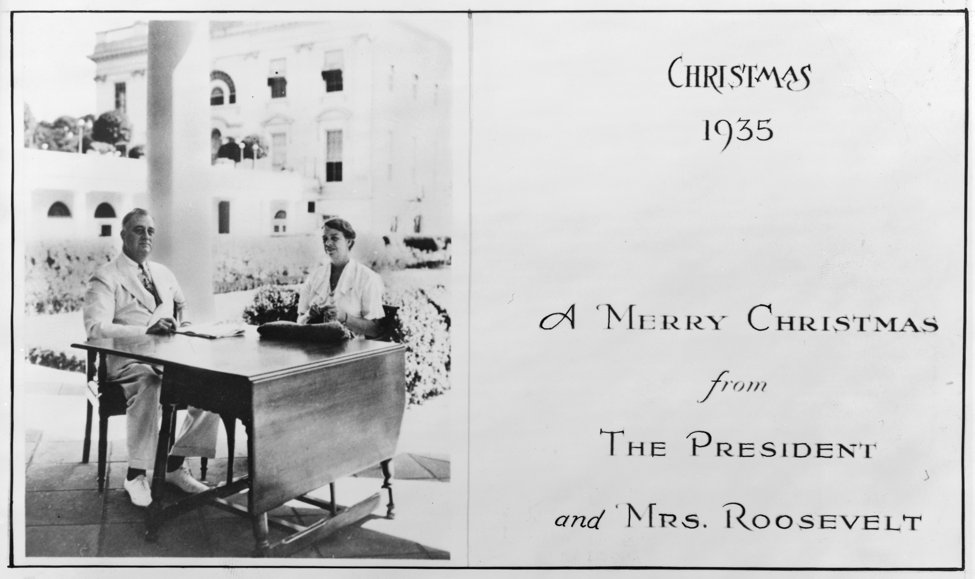 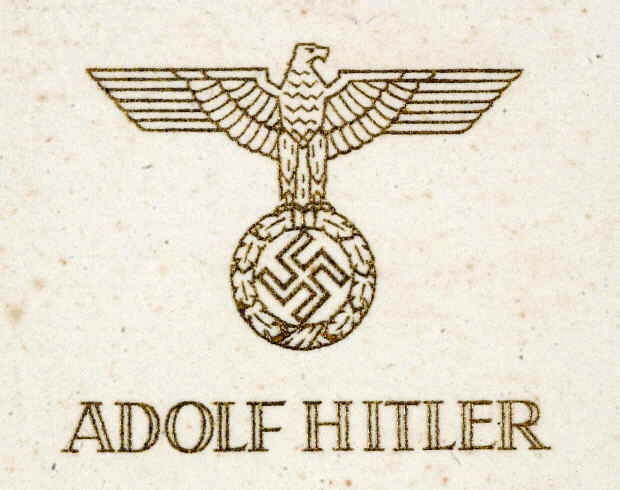 The 1940’s were again war years and, as tradition required, President and Mrs Roosevelt sent their annual Christmas greetings to the nation. Note the Roosevelts wished the nation a “Happier New Year”. 1942 had not been a good year for the United States, most of its Pacific Fleet had been sunk a year earlier and lay at the bottom of Pearl Harbor, the Japanese were still on the offensive in the Pacific and the British Isles remained under threat of a German invasion.The Allies had yet to achieve a significant victory against the Germans or the Japanese. All this was to change early in 1943.
Even Hitler sent Christmas cards although the one pictured above was sent at Christmas 1943 when the war had begun to turn against the dictator.  The back of the card, sent to an artist, reads:
“Even in this year, I would like you to accept as a thankful remembrance of the pleasant hours which I was able to experience in my home, thanks to your artistic involvement, a package which will arrive separately, as a small Christmas gift.  It comes from, in turn, articles that were made available to me from abroad or from occupied territories. With most cordial wishes for the Christmas holiday and in the New Year,  (signature:  A. Hitler) “
His reference to “articles made available to me from abroad and from occupied territories” is chilling. 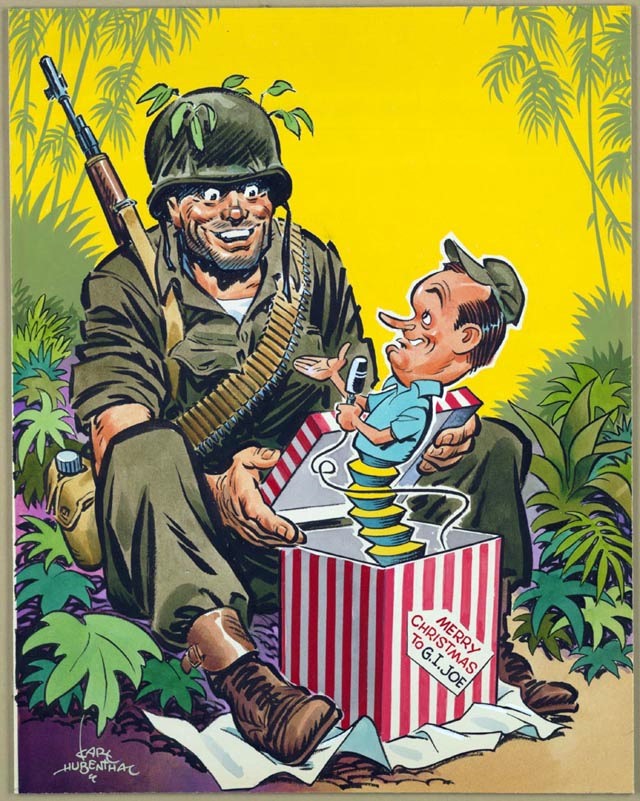 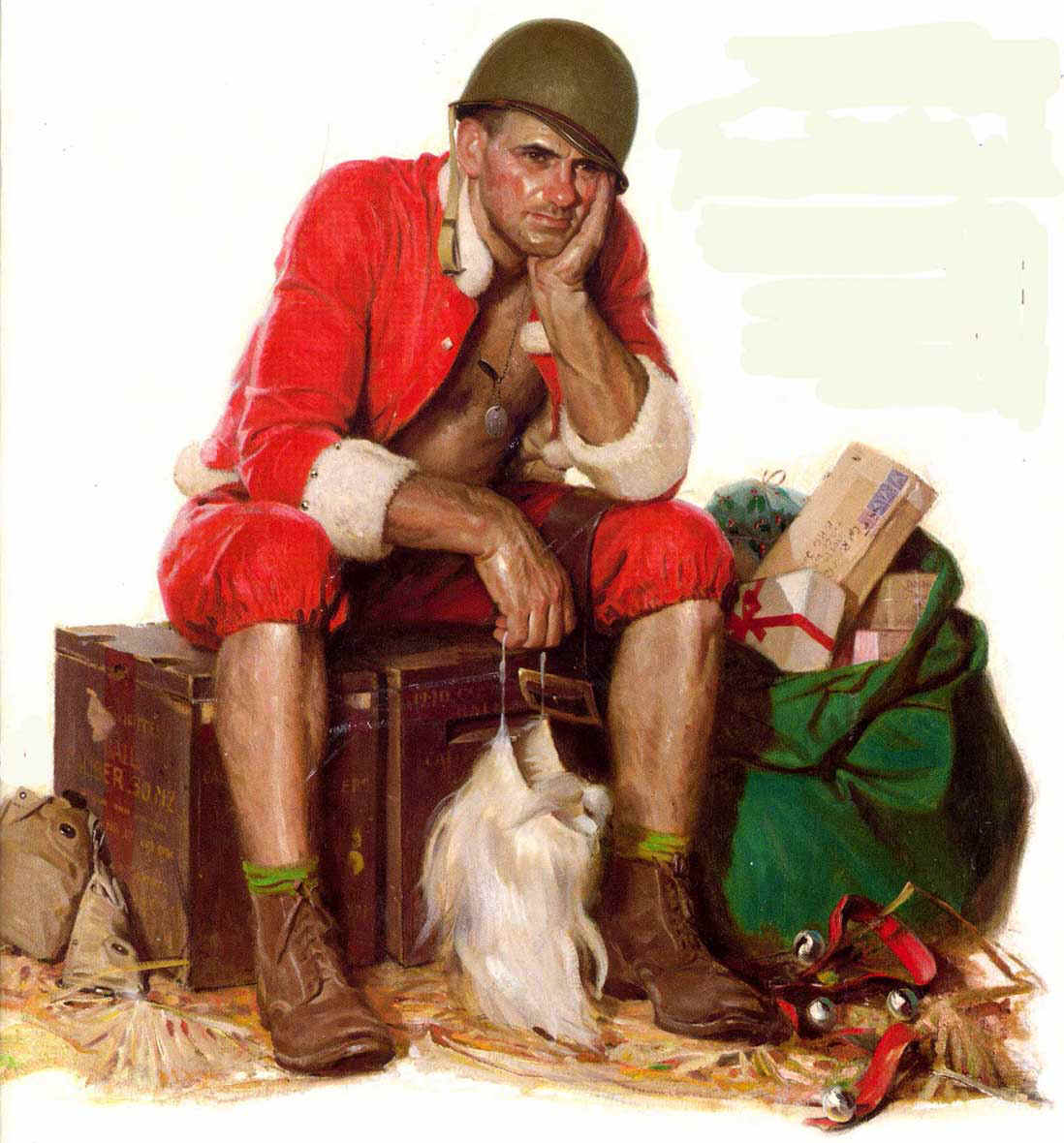 In the Pacific Theater it was really too hot and muggy  to wear a Santa outfit even when Bob Hope came to entertain the troops. 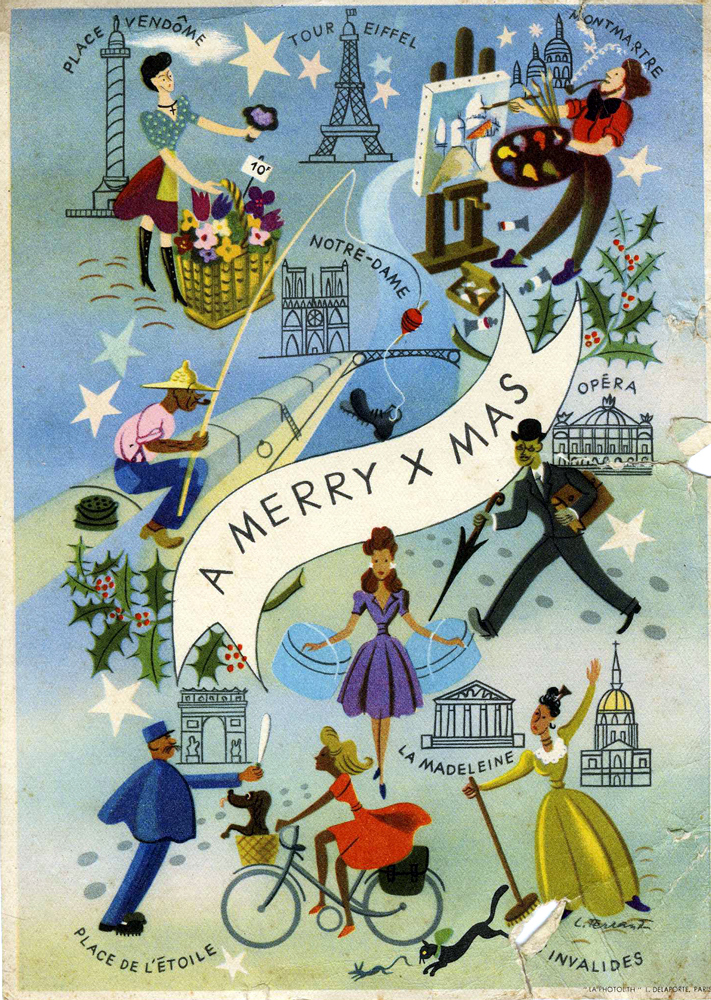 The weather was better in Paris and the mood very much elevated in 1944 when the Allies liberated Paris. GI’s on this front could often get passes to enjoy the nightlife of Paris for a day or two. Of course your first stop before leave was the delousing station but not to worry, a couple of days back at the front and your little friends would return. 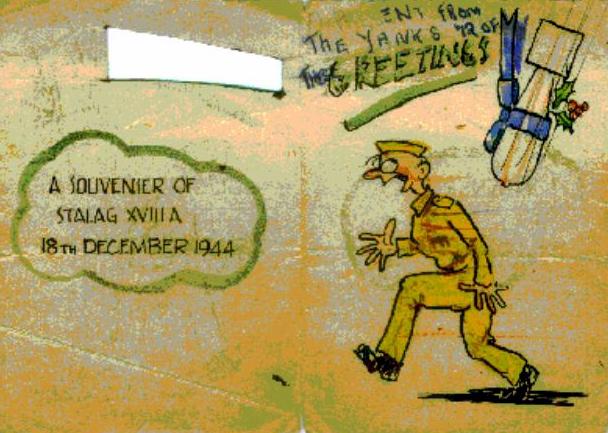 Prisoners of war from both sides were allowed to send Christmas cards although it is unlikely the one above got by the censors. The GI’s responsible for this card, dated December 18th, 1944 were certainly unaware that two days earlier the German Army had mounted a massive offensive in France which became known as the Battle of the Bulge. 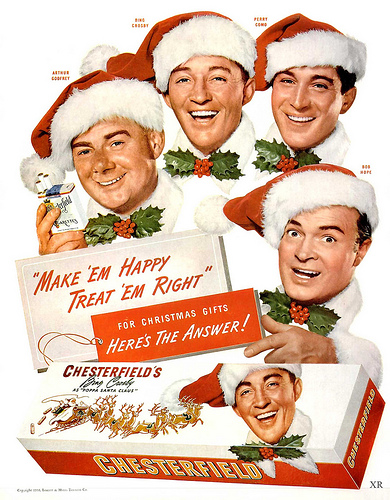 During the war millions of Americans acquired the smoking habit and by the 1950’s the perfect Christmas present was a carton of Chesterfields. All the most famous people smoked Chesterfields which made it the perfect gift.

Popular movies and TV characters became the theme of many Christmas cards after the television  became an household item. The card above was sent by Disney Studios in 1951. 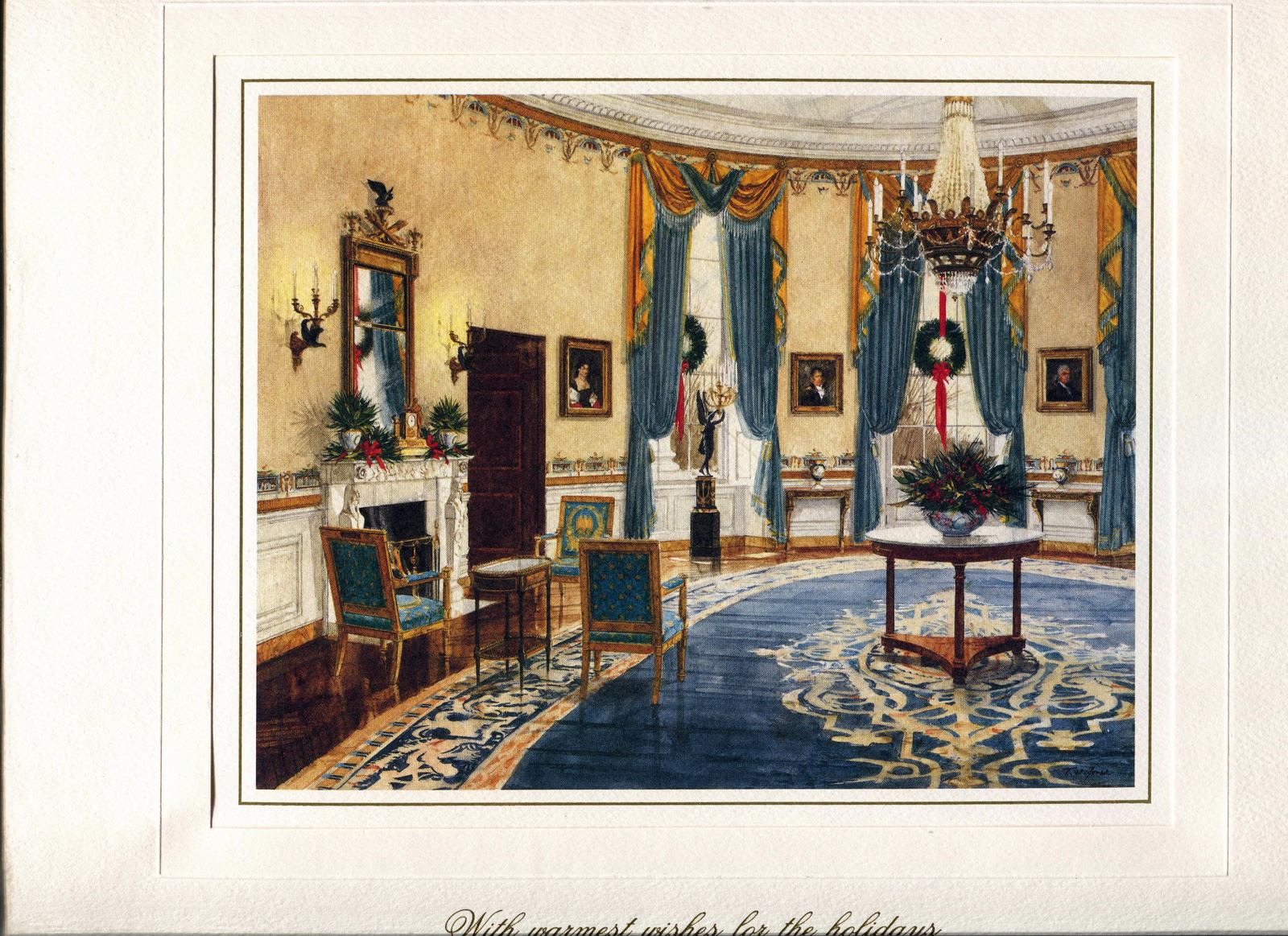