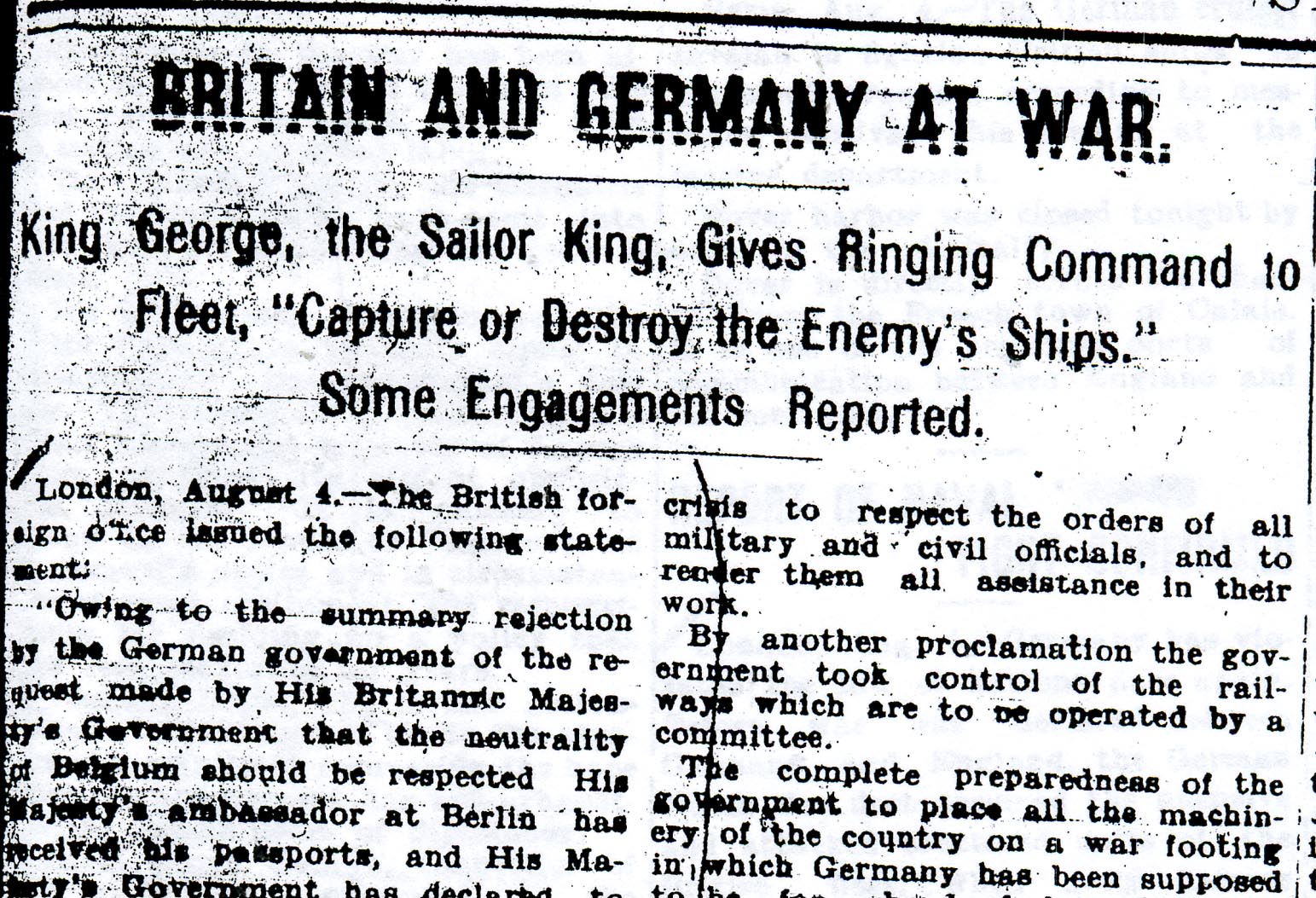 The most important news of 1914 was, of course, the beginning of the Great War in early August. Above, the St Croix Courier of August 8, 1914 reports the declaration of war. In the beginning, very few expected the war to last long or involve much death and destruction. After all it was something of a family affair—Kaiser Wilhelm of Germany had declared war on his nephew Tsar Nicholas of Russia and King George of England, now at war with Germany, was also cousin.  As war had been thought inevitable for years, many actually felt a sense of relief that the combatants were finally going to sort out their differences in traditional European fashion. The belligerents would fight a few battles which would be followed by a peace conference during which the winners of the battles obtained some territorial gains and political concessions. This is what had happened on the continent for a hundred years. In fact there had been several “wars” in Europe since 1900 and all had ended in pretty much this fashion. Just a few months earlier Turkey and Serbia had signed a peace treaty to end one of Europe’s frequent dustups. 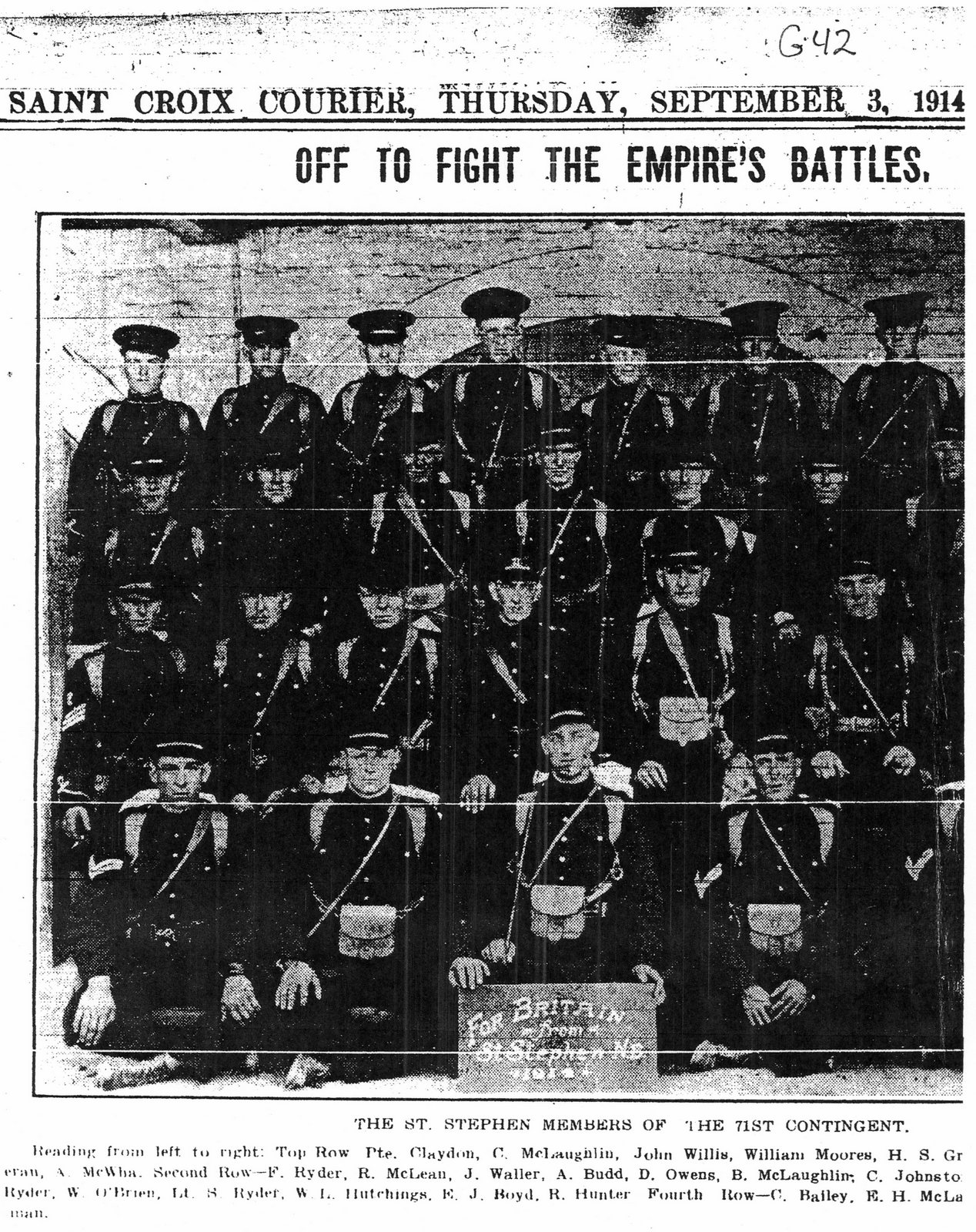 Even so young men from the St Stephen area were off to the war in Europe less than a month after the August 8th declaration of war. Many thought they would be home by Christmas and sadly some were—the first casualties of the war which, at its conclusion over 4 years later, became optimistically known as the “War to End All Wars”.

There wasn’t much news other than war news after August, but there was plenty of news before August. In Britain the Irish Rebellion turned violent, and to this day some of the issues which caused this revolt remain unresolved. Brexit negotiators are flummoxed over the problem of the border between Irish Republic and Northern Ireland. The U.S. occupied the Mexican port of Vera Cruz after the Mexican government had seized some sailors who had strayed into an off limits section of the port. The U.S. demanded their release, an apology, and a 21-gun salute to the U.S. Navy. The Mexican government apologized and released the sailors but thought the 21-gun salute was a bit over the top and refused. The U.S. occupied the port for 9 months.

The Panama Canal opened in 1914; the British Parliament voted against suffrage for women, which created nearly as much havoc for Parliament as the Irish and European wars combined; and the first airplane flew out of sight of land from Scotland to Norway. 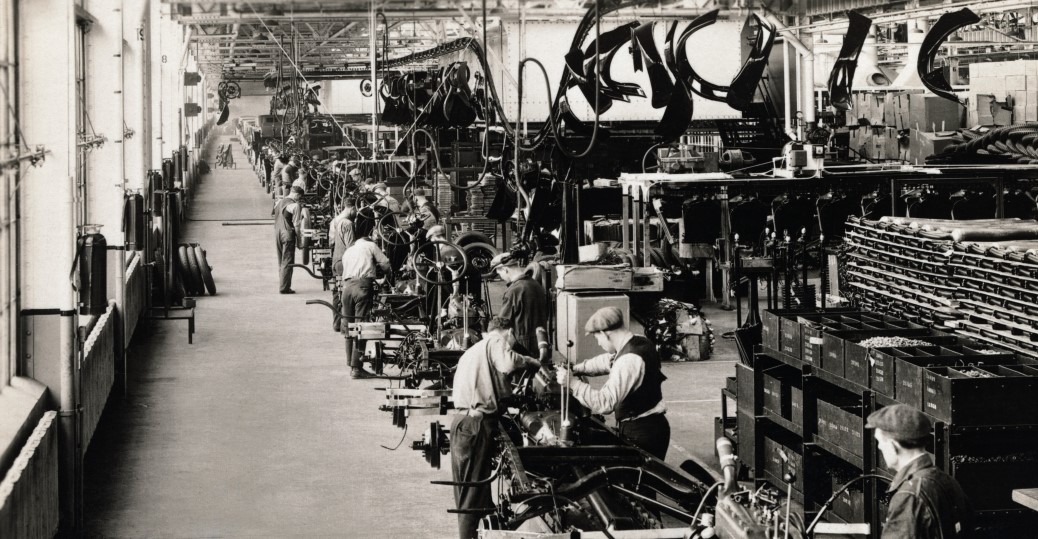 In the U.S., Henry Ford, who was not known for his progressive positions, changed the history of employer-employee relations in the U.S. when he doubled the pay of his workers from $2.40 a day to $5.00 a day. He reasoned, as it turns out correctly, that he could sell more cars if more people had the means to buy cars and while his fellow capitalists were outraged, Ford became the largest automaker in the world. 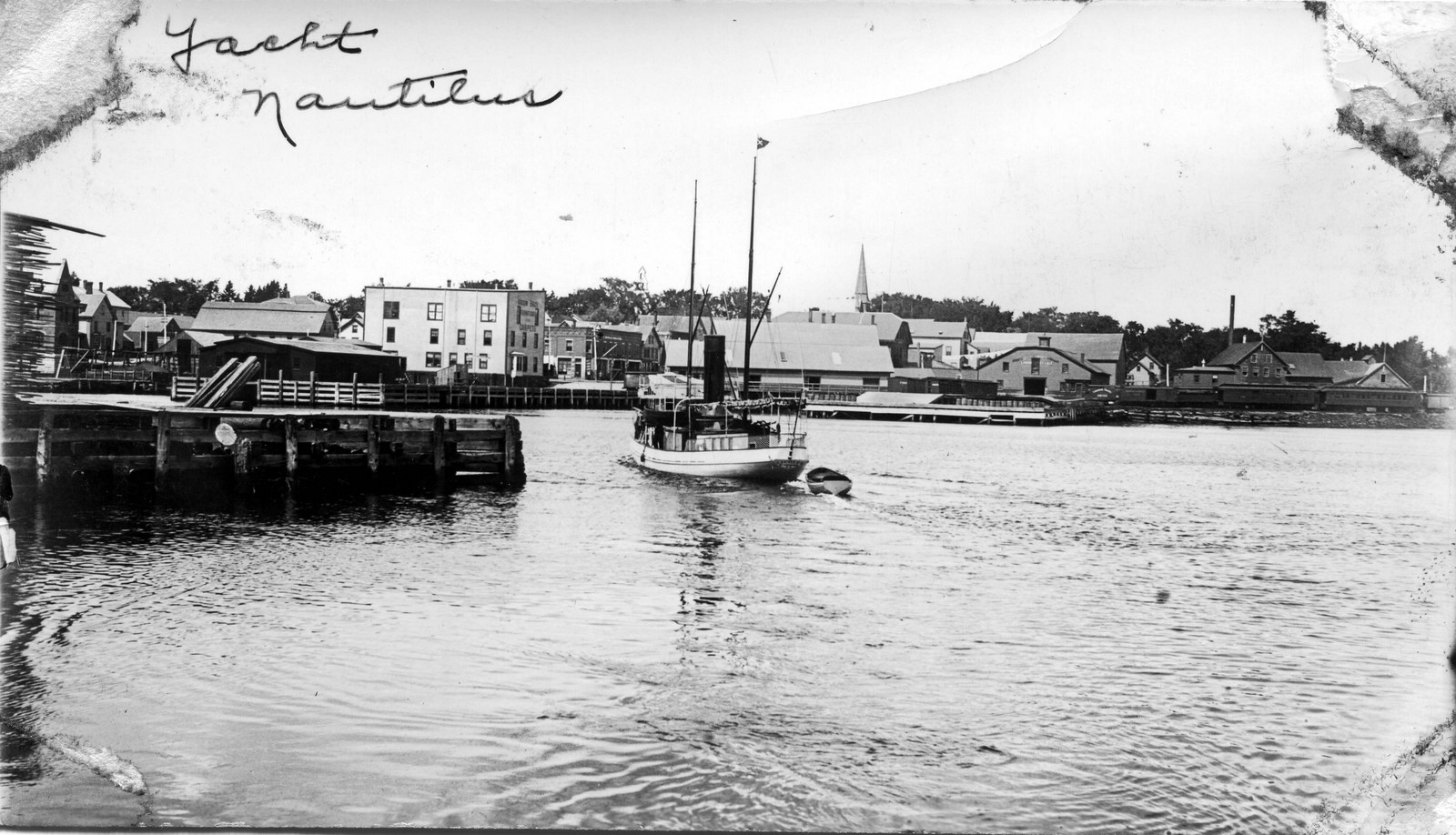 Locally, the yacht Nautilus was impressed into service by the Canadian Government in 1914. The Nautilus was owned by a St. Stephen businessman and was considered the nicest boat on the river. The corner of Water and King Streets in St Stephen can be seen on a direct line with the bow. 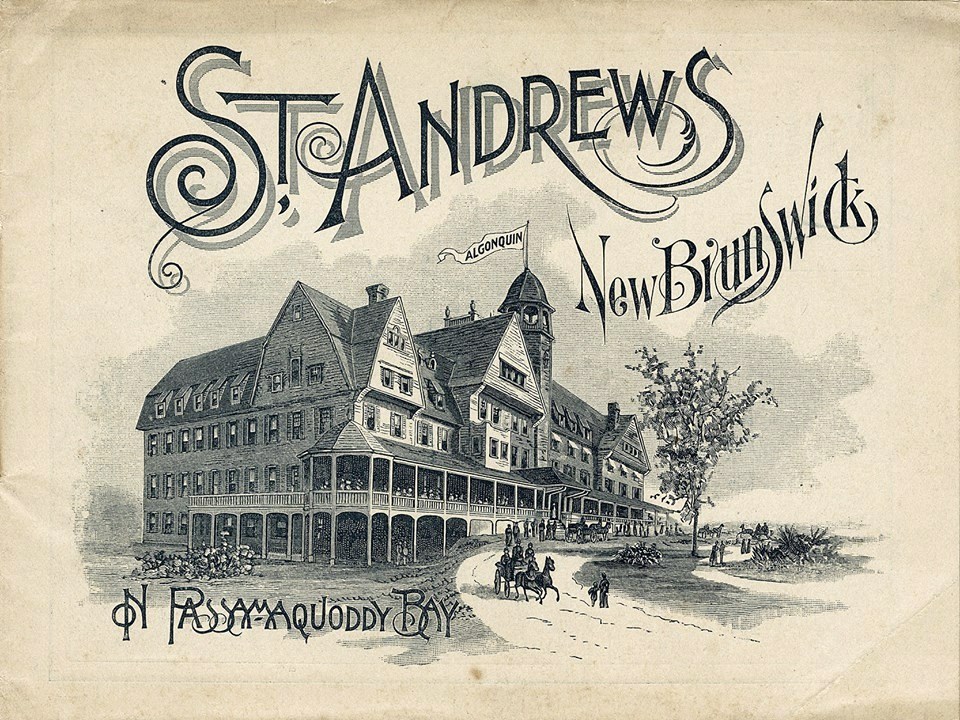 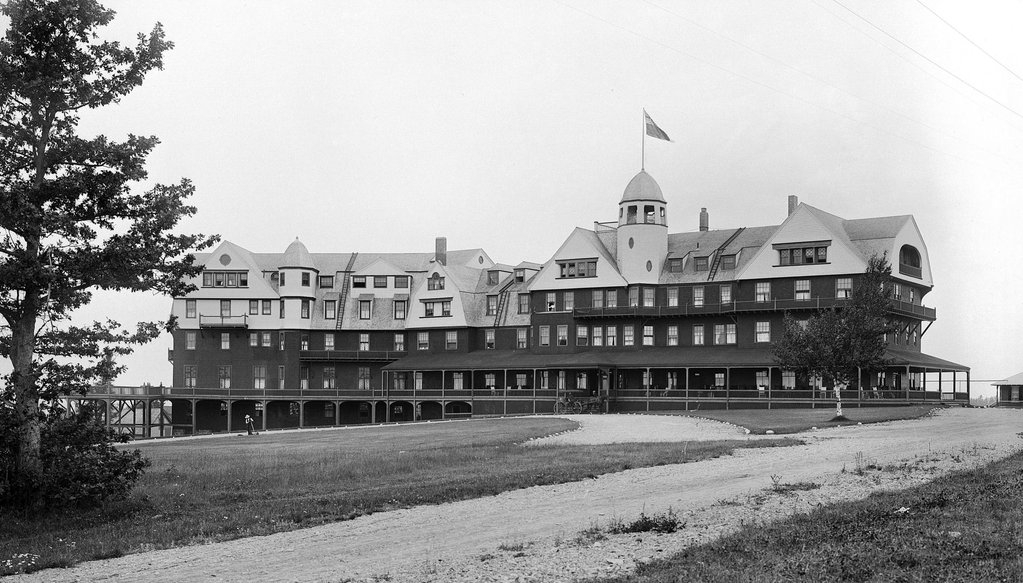 There were a number of major fires in the area in 1914. The largest blaze occurred in St Andrews when the world famous Algonquin Hotel burned to the ground. Built in 1889, the above photo shows this beautiful building just before it burned in April of 1914. The fire was started by workmen making repairs and was aided by a strong wind. Had this wind not been blowing away from the town, much of St. Andrews could have been lost. According to the Courier “not only has a menace to the town been removed, and a possible holocaust prevented but a more modern and more beautiful structure will undoubtedly be built by C.P.R. at once.” As we know, this is what happened. 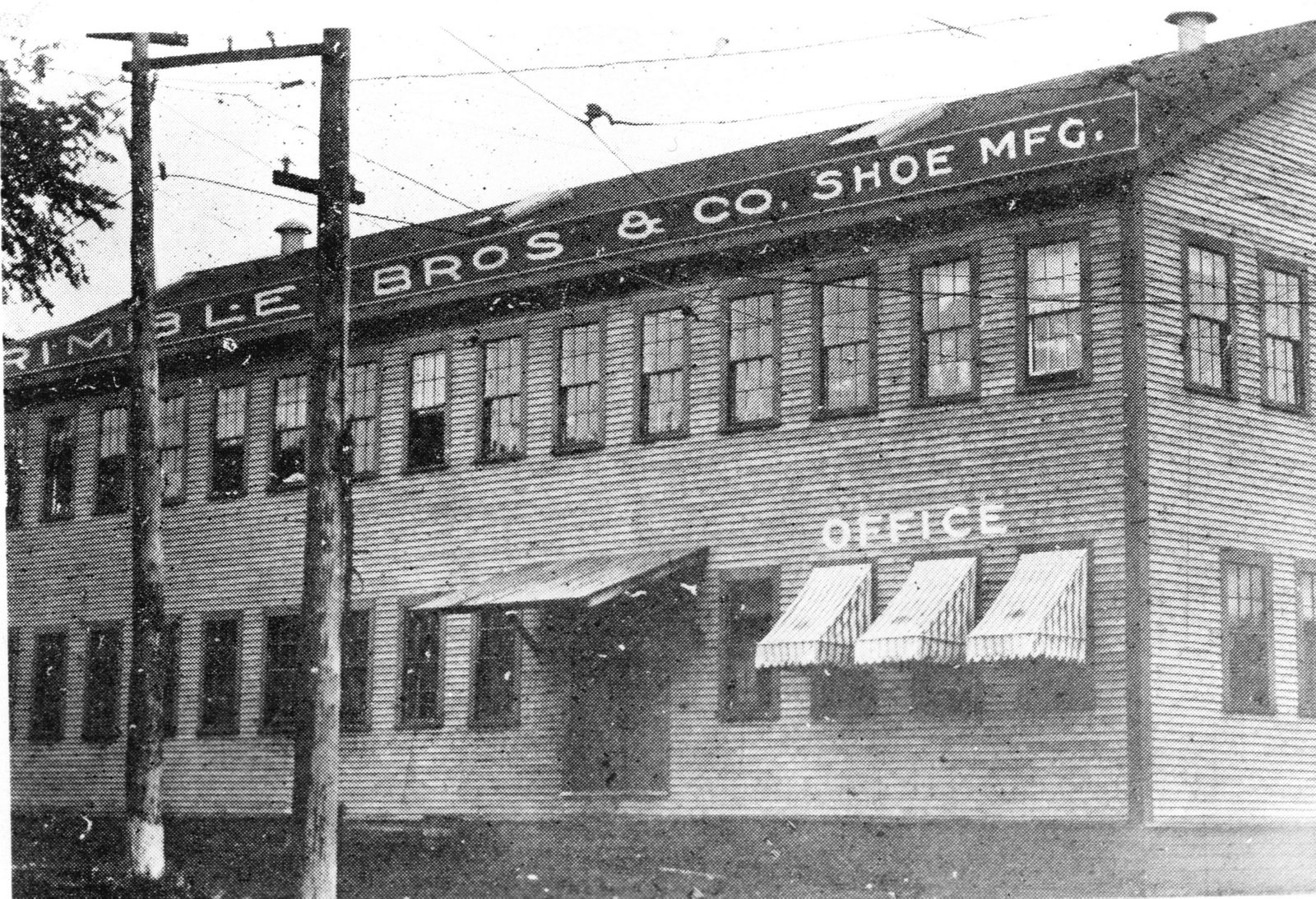 In Calais, the massive Trimble Shoe at the end of River Street by the bridge burned to the ground in October of 1914. The factory would have been located where the EMEC building is now, just up River Street from customs. There were no injuries but the loss was great as the factory was a major employer in the area. 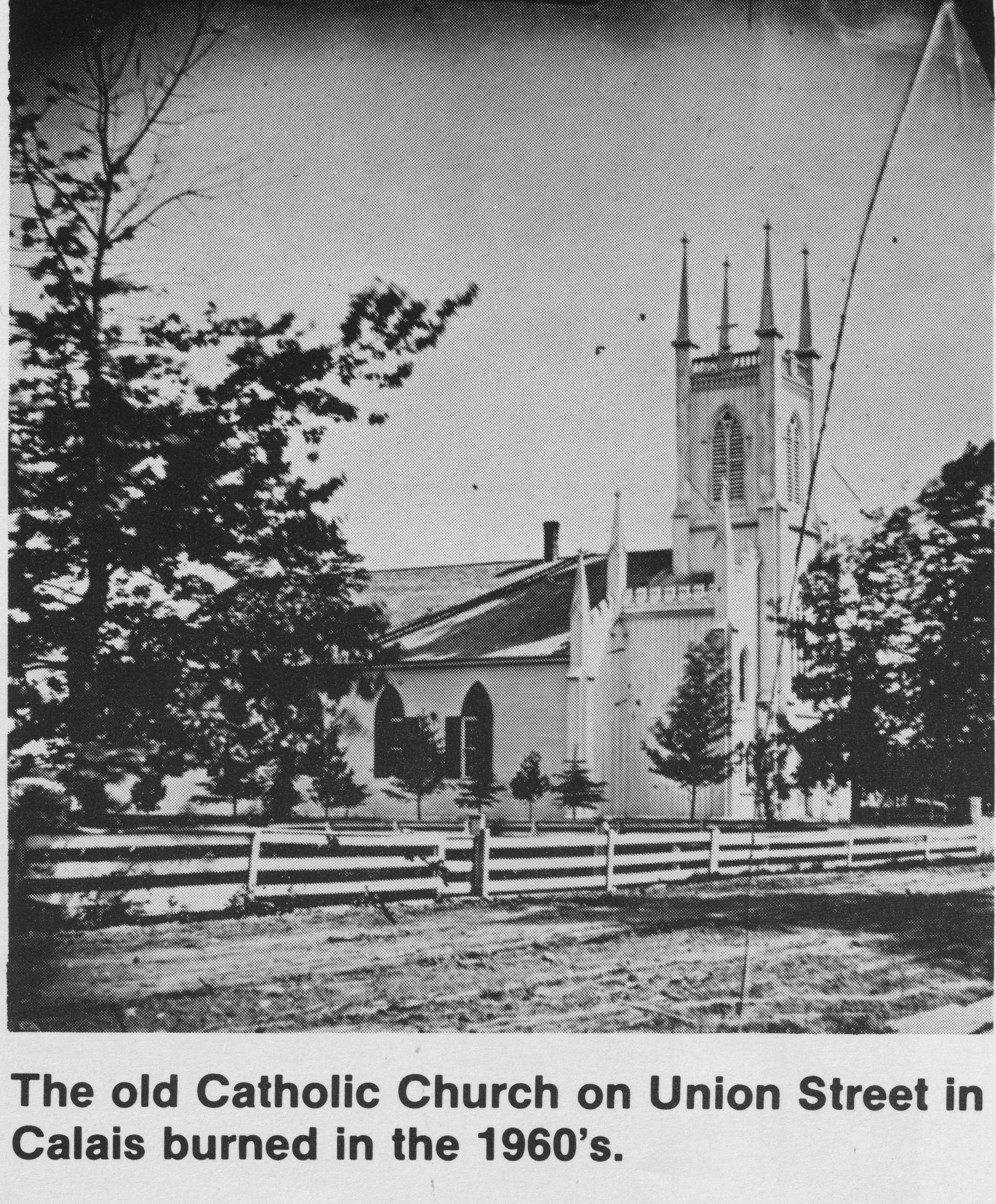 The original Catholic Church on Union Street had its grand opening as a Roller Skating Rink on Saturday evening, October 10th, 1914. The Catholics had long since sold the old church building which when built was Calais’ first town hall. The ad for the grand opening said “GOOD MUSIC AND GOOD ORDER ASSURED”. It was the victim of an arsonist in the 1960s. 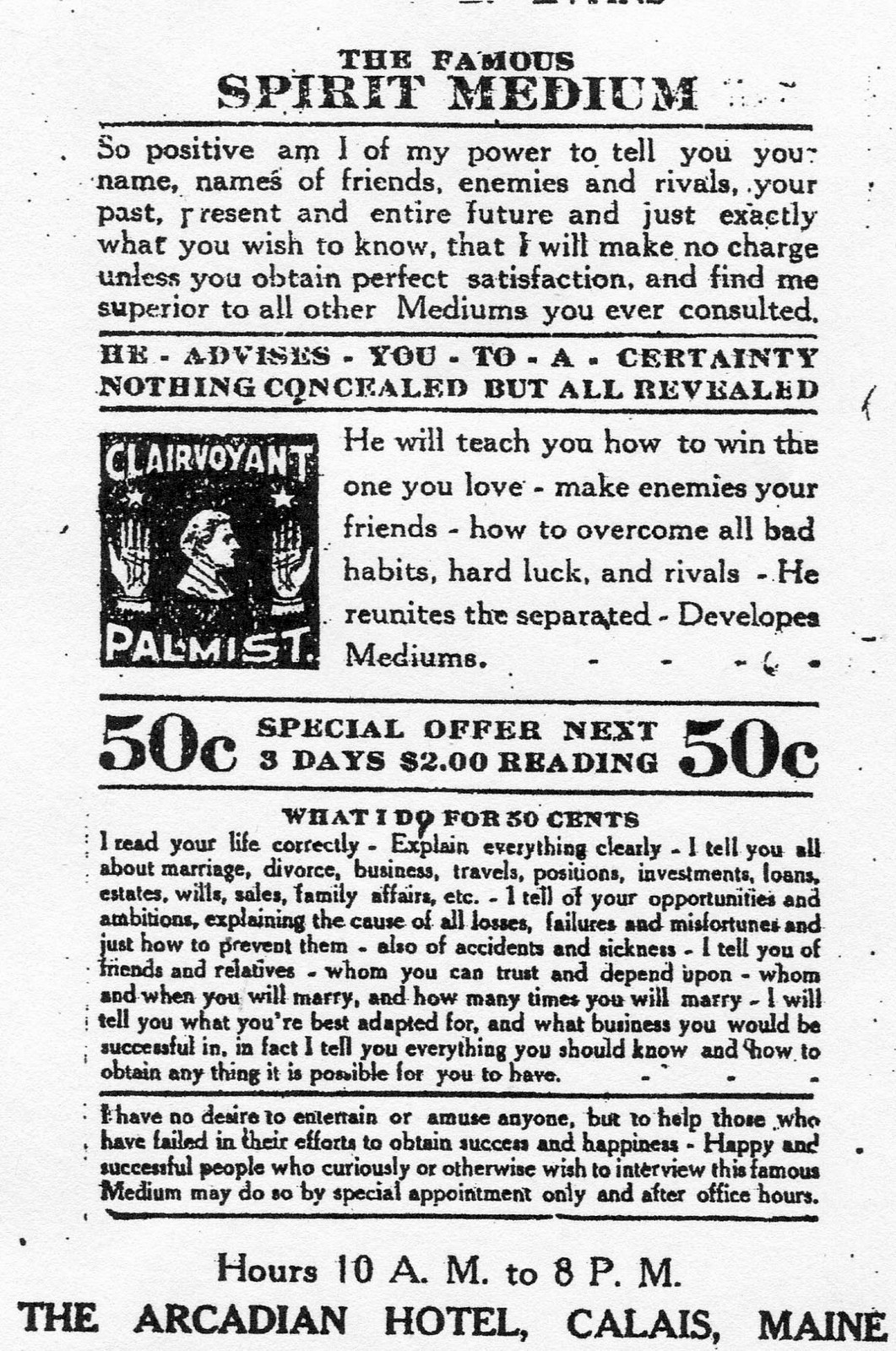 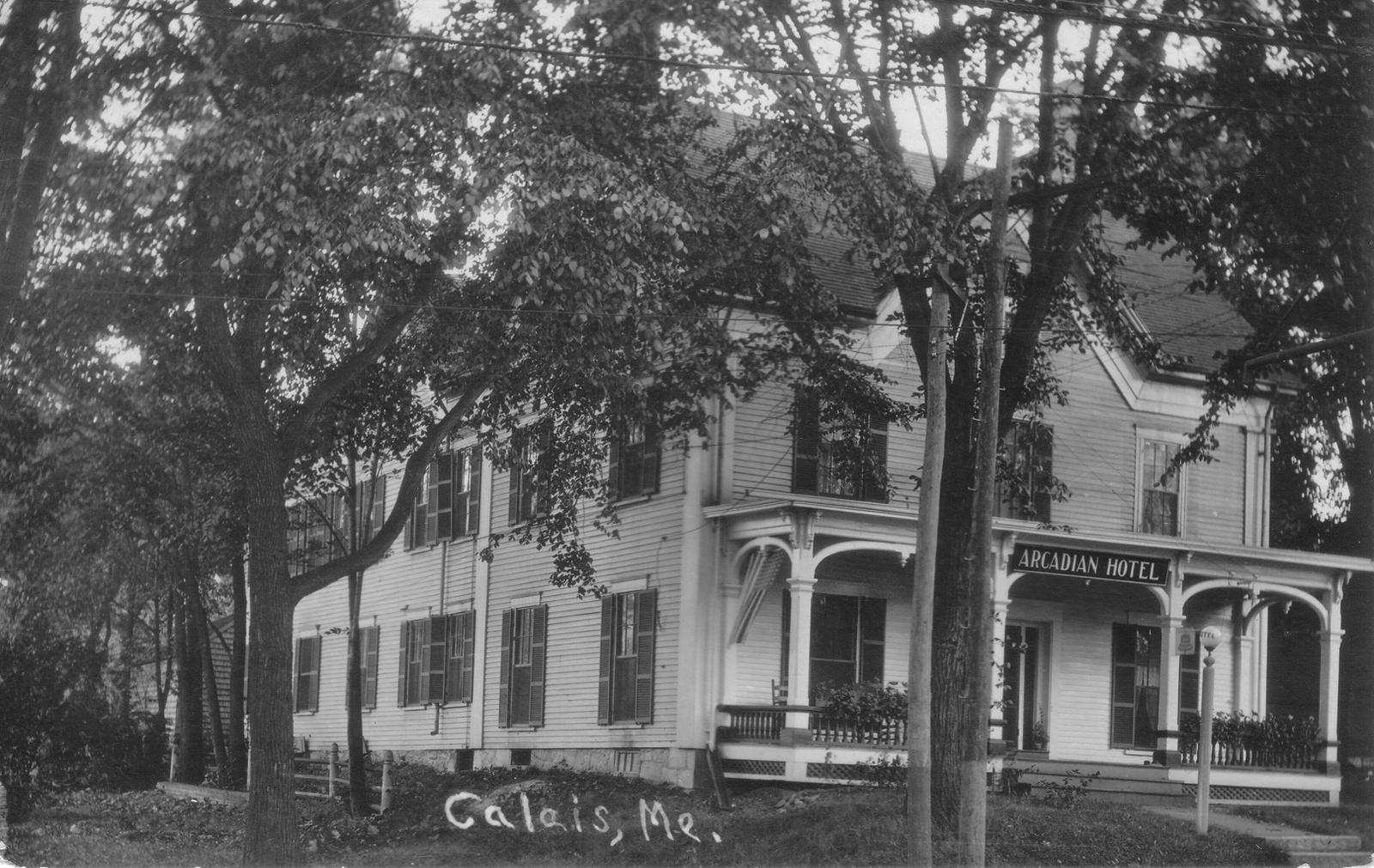 For those not sure the owners of the Roller Rink could really assure good order, there was other entertainment in Calais in 1914. At the Arcadian, later the Portside and the Mecca, a spirit medium would tell your future after proving his bona fides by first telling you your name and the names of your friends, enemies and rivals—all valuable information especially if you were unclear who fit into the enemies and rivals category. The cost was only 50 cents. 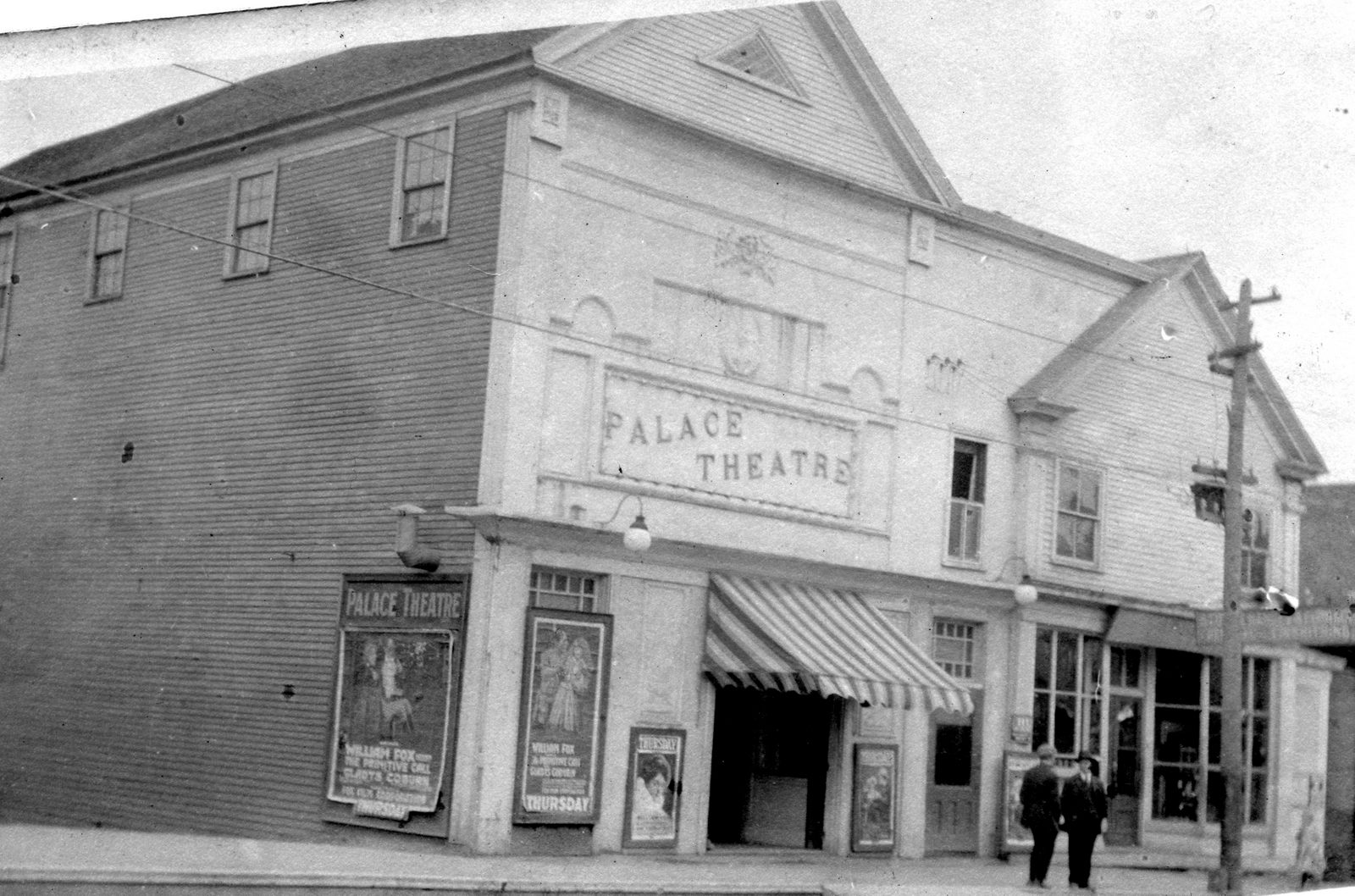 For those interested in more traditional entertainment the new Palace Theatre opened on Main Street. The Palace opened in February, 1914 to great fanfare. The newspaper said it was one of the coziest in the State, decorated by veteran painter John Acheson and sure to be a popular place of amusement. An elaborate musical score accompanied every silent movie making it necessary for the theater to hire a skilled piano player.  For its opening The Palace engaged Larry Murphy of Milltown. The Palace lasted only a few years. It had stiff competition from the Calais Opera House and in 1915 the Bijou opened in St. Stephen. By 1919 ads for the Palace disappear from the papers. The Bijou was replaced by the Queen about 1923. The long run of the Calais Opera House ended in the late 1920s when it succumbed to competition from the State Theater, opened in the Unobskey Block in 1928.

In other Calais news of 1914 the locals were outraged over the condition of the Calais-Eastport road. “Holes, ledges and gullies make the road, in places, almost impassable for cars and any machine that succeeds in navigating the highway between the two cities receives a severe racking that does it nothing but harm.” Moose were becoming so scarce there was talk of a five-year moratorium on hunting them; and in Eastport the foremen of several of the sardine factories were charged with violating the child labor laws. Advertiser articles included “A Typical Saturday Night in Milltown” in which are related battles between the authorities and Milltown residents: “officers were called to arrest a man for fraud at the stable when the wife interfered…. Finally one officer got her into the carriage and the other got a loving grip around her neck when she reverted to a primitive method of warfare….” “There was a lively four-cornered dog fight in front of Eary’s and a livelier cat and dog performance on Barclay’s lawn.. at 9 O’clock all the principals in the various acts of the drama had made their exits and the inhabitants made their way to bed completely tired out with such unusual excitement.” “Several of our promising young men crossed the border and raided one of the cafés in Canada Saturday night…  armed with clubs, boulders and an assortment of small stones they stormed the building…….  Two weeks later an Advertiser article was headed “WAR ON THE BORDER” reporting a major battle on the Milltown bridge “started in one of the booze emporiums across the line”. The bridge was shut down; even the streetcar was blocked by the melee. “… while the troops of each side occupied opposite ends of the bridge a bombardment of stones took place injuring many innocent spectators. A distress call was sent and the entire police and fire dept’s of Milltown NB were summonsed. “Milltown’s reputation as the toughest part of town was well earned although some in the Union may dispute the point.

Finally, a couple of 1914 Christmas cards from Australian forces fighting in Europe: 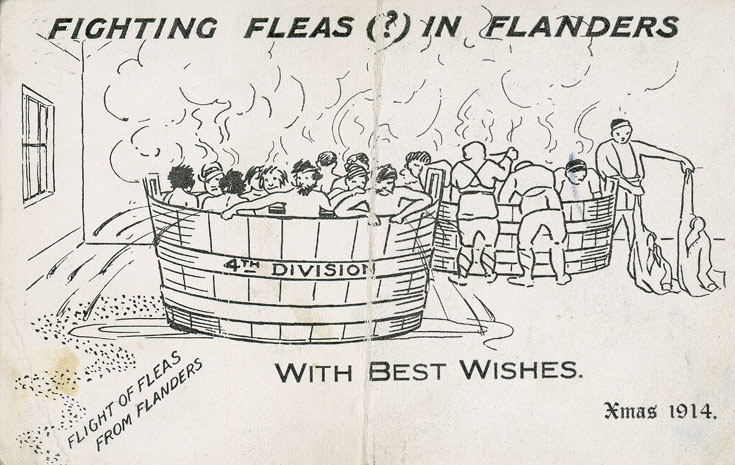 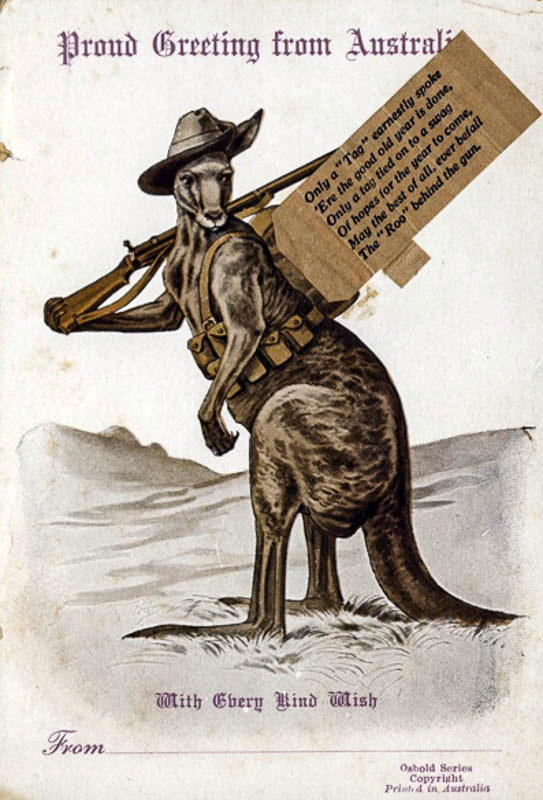