The cottage (located near the Holmestead at 527 Main Street) is open from July 1st to mid-September. Visitors are invited to tour the cottage at no cost. Our knowledgeable docents will answer any questions you may have.

The Holmes Cottage is now an open museum in the summer months.

The doctor’s cottage was known to exist in 1805, having been sold to an Artemus Ward from Massachusetts, but studying the references to this man it seems likely that the house was built in the late 1790’s. Dr. Holmes was the third doctor to practice from this house, the first being Shilometh Whipple, who later became a famous Boston physician. The second was Dr. Cyrus Hamlin, older brother of Hannibal Hamlin, first Vice President under Abraham Lincoln. Cyrus and Job Holmes went to Maine Medical College at Bowdwin and graduated the same class. Cyrus, although active in church and banking affairs, was not a well man so decided in 1846 to sell the house and practice to his now brother-in-law, for Job had married Cyrus’ sister, Vesta. Dr. Holmes lived and practiced from the cottage until 1850 when he built a large house now known as the Holmestead, next door. For the next fourteen years he practiced out of the cottage while taking on an apprentice medical student, Charles E. Swan. After Swan graduated from medical school he joined Dr. Holmes and they both practiced from the Cottage for 16 years, until Dr. Holmes death in 1864. 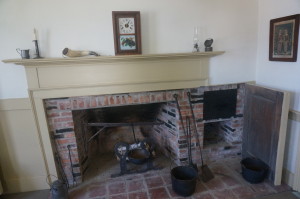 The kitchen fireplace has been restored with many of the 18th century bricks kept intact.

The Cottage has been restored in the image of the 1850 Doctor’s home and office. It contains a great variety of pictures, maps, medical equipment, period furniture, children and adult clothing (the Holmes’ brought up 5 children in this Cottage). The original wood work and window woodwork is unusual as are some of the door locks. The central chimney has been rebuilt on a base that is 8 feet by 8 feet, 26 inches of re-rodded cement. There are 5 flues, one for a floor furnace and the others to working fireplaces all faced with original brick. The kitchen fireplace contains a swing out crane for holding pots over the heat and beside it lies a two level working Dutch Oven. The kitchen table is an early New Brunswick Tip Top table which complements the period.

This kitchen room is designed to show their living at an earlier period, before kitchen stoves were developed when cooking was done in the open fire place. and breads were baked in the Dutch oven. The table was designed so that when not in use it could be tipped up and placed against a wall and used as a chair. Butter was churned from local cream and refrigeration was the cool dirt half cellar. Getting meals was quite a chore for the seven people in Dr. Holmes family. A cooking ell was attached to the rear of this house, date unknown and a small barn was attached to that. The doctor had to have a horse to make his calls to the sick up and down the valley. Dr. Holmes was practicing during most of the Civil War period. His son, Frank, joined the 6th Maine Infantry and was killed at the battle of Fredericksburg, Va., 1863.

The doctor’s office contains Dr. Holmes 1847 day book of calls and charges together with herbs, mortar and pestle, for making medicines, and his traveling medicine kit complete with medicines of that time. Notice the high window that lets in light but hides the patient’s view. Also in the display case is a Civil War medicine kit and flask. On the wall above the display are two Regimental History’s of the 6th Maine, Calais Co. D, and Company A, Brownville Rifles, Frank P. Holmes Company. 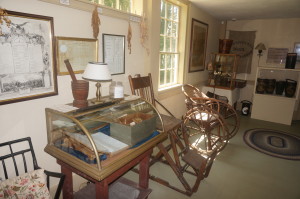 The office contains Dr. Holmes’s medical bag and logbook dating to the 1860s when he last practiced.

Also view the wooden wheel chair of the 1850’s and the portable traveling dentist chair. Before dentists were specialists the local doctor carried his dentist chair in his wagon and pulled infected teeth on demand.

There are many other items of Calais history in this room with its own fireplace; early fire club artifacts, some Indian items, early bank money, ship models, including one of the Fred Hamlin, done by Alice Washburn circa 1930. There is also an 1834 map of Maine that is interesting because of the shape of Washington County.

Two holes left in the plaster give a view of the construction of the building. One overhead shows the post and beam joints and the other the split wide board laths that held the plaster to the walls. 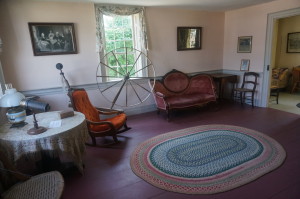 The parlor features a spinning wheel, antique grandfather clock (not pictured), and mourning handkerchiefs from the death of George Washington.

The living room is designed to fit early Victorian life style. Its varied contents are typical of the period; a tall clock with wooden works, a hair wreath, picture of Hannibal Hamlin, Vesta Holmes’ brother, a horse hair rocking chair, a child’s chair, pictures of Washington and family and Lincoln and family, an unusual fireplace framework of curly maple, a Washington “Crying Handkerchief” and early bible.

This covers the downstairs of the cottage with the exception of the front entryway. This extension was made at a latter unknown date, together with the three upstairs dormer windows. It contains a circular stairway and charming child’s winter sleigh and registration desk.

There is no fee for the museum visit but donations, membership and volunteers keep us going. Please consider helping.