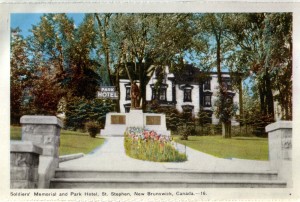 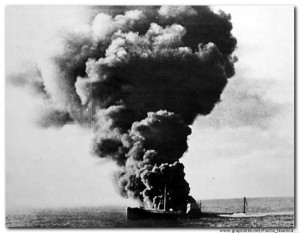 On September 1st, 1939 Adolf Hitler invaded Poland. Two days later both England and France declared war on Germany and the Second World War began. The conflict, while an ocean away, was immediately felt in the St. Croix Valley.  In late October the Emile Miguet, France’s largest oil tanker was torpedoed in the North Atlantic. The photo above was taken by the sub responsible for the sinking, German submarine U-48 and was recovered from the German archives after the war. The 37 survivors were rescued 31 hours later by an American vessel and sent by charter bus back to Canada where they spent the night at the Park Hotel on Water Street in St. Stephen. According to the Courier, the Captain and crew gave the paper a vivid description of the sinking and the harrowing ordeal which followed. 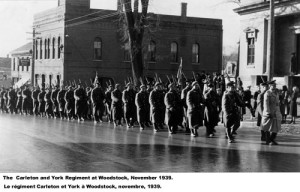 It came as no surprise to anyone when on September 10th Canada joined England with a declaration of war against Germany. Volunteers flooded the recruitment offices and many from St. Stephen joined the Carleton-York regiment of Woodstock and were organized into Company C. In fact on September 6th, even before the formal declaration of war, 150 enlisted men and officers left for training in Woodstock and the St. John, Fredericton and Woodstock fairs were all cancelled as the grounds had been taken over by the military for training. The Advertiser reported on the 6th “The news that England had declared war on Germany came as a stunning blow to all St. Croix Valley residents on Sunday and the tragic news overshadowed all other events.” U.S. residents openly flaunted the Neutrality Act and crossed the bridge to enlist in the Canadian forces either because of their close personal ties to our neighbors or from a spirit of adventure. The border effectively closed as Canadians were no longer free to leave the country and U.S. citizens could obtain approval under the Neutrality Act to travel to Canada only with great difficulty. On December 21st, 1939 the first contingent of Canadian forces arriving in England included the Carleton- York division and the first Canadian soldier to step ashore in England was Sgt. Bernard Gregson of St. Stephen. 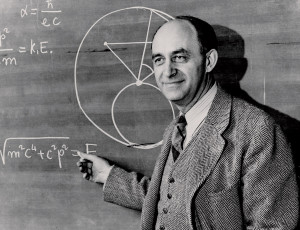 The United States declared its neutrality in the conflict even though President Roosevelt understood from the beginning that the country could not avoid involvement indefinitely. He would have come on the side of the Allies immediately had not anti-war sentiment in the country prevented it. The America First movement was the primary non-interventionist movement and it convinced the majority of Americans that Europe should be left to solve its own problems. Thankfully Roosevelt did everything he could to assist the Allies within the limits of his Presidential powers to prevent a Nazi victory- America became the arsenal of democracy, supplying both England and Russia with the means to fight the war.   Roosevelt also authorized the Manhattan Project to develop the atomic bomb. The fellow pictured above was a recent Italian immigrant to the United States in 1939 named Enrico Fermi who, while working at Columbia University in 1939, was the first split the atom. In December 1939 Albert Einstein met with Roosevelt and convinced the President that this breakthrough could allow the development of the most powerful weapon known to man. 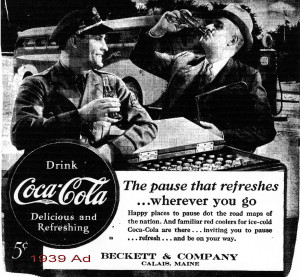 Even though Roosevelt’s position on the war wasn’t popular in 1939, he was personally popular and was often seen in promos such as this 1939 Coke ad from Beckett and Company. 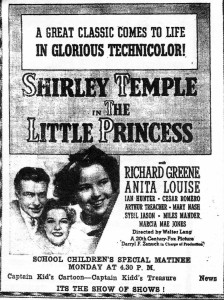 The war had little impact on day to day life in United States in 1939. Americans had a love affair with motion pictures and the State Theatre showed both The Little Princess with Shirley Temple and Judy Garland’s The Wizard of Oz. Gone with the Wind was in its final stages of production and media was already calling it the most spectacular movie ever made- premium prices were to be charged at the box office when it was released in January 1940. Superman and Batman both made their debuts, Frank Sinatra made his first recording and Bette Davis and Spencer Tracy won Academy Awards.  Montgomery Ward produced a promotional Christmas coloring book featuring a red nosed reindeer eventually named  Rudolph although Rudolph was originally to be a moose named “Rollo “or “Reginald” and a Christmas legend was born. The lexicographers at Merriam Webster discovered that its dictionary had contained the word “Dord”, defined as “density” since 1934 and “Dord” was, in fact, a “ghost word”- it didn’t exist. The explanation of how it came to be included in the dictionary in 1934 is too complex to relate but the editor in chief deleted the word in 1939 while suggesting it was “probably too bad, for why shouldn’t “dord” mean density?”

In sports Ted Willams hit his first homer and Lou Gehrig’s 2130 consecutive game streak ended after he was diagnosed with a crippling nerve disease which not only took his baseball career but his life a couple of years later.

The obituary of Hezekiah King marked the death of the last living veteran of the Civil War from this area. He was 96 years old. 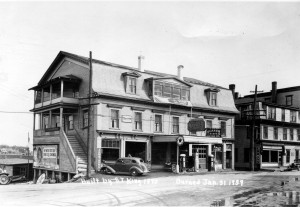 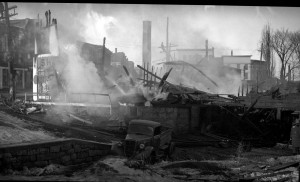 The Cole Bridges garage burned again in 1939. This building is perhaps the most fire prone in Calais history. It burned to the ground in the great fire on 1870 and was rebuilt only to burn on a regular basis over the years including a couple of times after the 1939 fire. It still stands today, a monument to the perseverance of its owners and the generosity or gullibility of the insurance companies. In the bottom photo the St Croix Hotel can be seen to the right of chimney at the center of the photo. The top photo is the original Cole Bridges Dodge garage. In the billboard on the side of the building a little girl declares “My Mother says our Dodge is so economical”. To the far right is the Emmans Hotel which was torn down in late 1939 and replaced by the JD Thomas filling station.

In other Calais news of 1939 the Moosehorn Wildlife Refuge was officially designated a preservation area and Dr. Miner sold the Calais Hospital on Church Street to the City of Calais. In Red Beach James Harvey of Woodland went off the road at Plaster Mill Cove and his car plunged 150 feet to the water. Mr. Harvey was trapped in the car and would have drowned had not William Ross of Milltown seen the accident and dived into the river to extricate Mr. Harvey from the car. Harvey insisted his wife had also been in the car which caused additional panic but it turned out that Mr. Harvey had forgotten he had left Mrs. Harvey at a nearby dancehall. This led to suspicion that Mr. Harvey had also forgotten to put the plug in the jug before leaving the dancehall and he spent the night in the Calais lockup.