So what did folks do in days gone by on Thanksgiving? Very much the same sort of things we do today. Of course they got together with friends and family and especially in the early days, they were expected to attend church services but they also engaged in sporting and community activities not dissimilar to those of today. 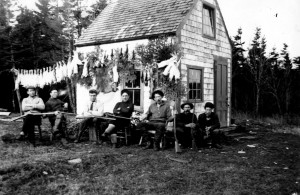 They went hunting. Richard Hayden, a teacher, hunter and jack of all trades from the Red Beach and Robbinston area made these entries in his diary in 1848:

1848- November 16 Thanksgiving Day. Chas., James & I went to the mill & then up the shore. Carried two borrowed bags home to Captn. Nash. Chas. fired at goose at the mill & hit it the first shot, & Mason fired with our gun & hit the first shot. We then went up shore by the Townhouse, where Mason fired & hit another. Chas. fired one & did not hit. I fired twice with the rifle & hit both times. I set up one of the geese & it was hit the third shot by young Kellogg. We then took our two remaining geese & came home. 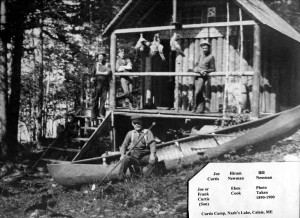 They were probably hunting near what was to become Curtis’ camp in the 1890’s.

After the turn of the century the Thanksgiving Turkey Shoot became an annual event in many communities. Charles Gillespie  usually won first prize in Meddybemps as described in a family history:

“He was proud of being a good sportsman and brought his children up to appreciate and respect the wilderness. In many a Thanksgiving Turkey Contest, he won first prize. He was an excellent hunter and marksman. He and his sons always shot wild game for their needs, especially during the difficult years when farm production was at a low ebb. Financially he lost heavily in the late twenties following the death of his wife Ellie, and during the Great Depression.”

In Princeton Bruce Belmore describes a less sporting turkey shoot which was apparently designed to compensate for the decline in the wild turkey population:

“At Thanksgiving time the men engaged in turkey shoots. A rifle and a cast-off rotary saw were the paraphernalia required for a turkey shoot, not over-looking the poor turkey of course. There was a hole in the center of the saw where it was attached to the driving shaft. In the turkey shoot the saw was set up on end and back of it on a box stood the sacrificial bird, his head stuck out through the hole, his eyes sticking out of his head. In the turkey shoot the man who succeeded in pinking the dodging head of the turkey, and he had to be good to do it, received as reward the dead turkey for his Thanksgiving dinner. A turkey was indeed a fitting reward for so clever a show of marksmanship, for in these parts in those days turkeys were as scarce as hen’s teeth. The rank and file of those Princetonians celebrated the holidays with feasts of pork loin and fresh pork spare-ribs. Of course they had plenty of pumpkin pie and mince-meat pie, the latter pretty generally made of contraband deer.” 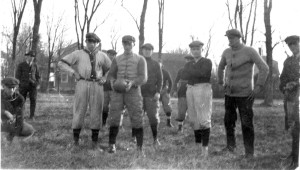 It may surprise readers to learn that there was football on Thanksgiving even before 1900. The four towns, Calais, St. Stephen and the two Milltowns all had teams and fierce rivalries from the early 1890’s. The Courier reported on a battle on Thanksgiving Day in 1926 between “ Hop” Corbett’s Ironmen of Milltown and the St. Stephen team which ended in a 6-6 tie. Even before football became popular there was horseless polo which was played either on the ice with a stick not unlike a hockey stick and a round ball or inside at such venues as the Milltown Opera House on Boardman Street and the Calais Roller rink at the corner of Main and Calais Avenue. 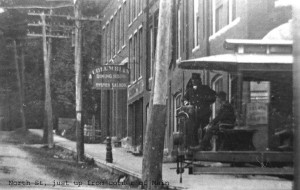 According to historian Ned Lamb:

“Polo November 27, 1884. The Victoria team of Saint John played Calais and after the game they had an oyster supper at Joe Spratley’s restaurant and then came to Milltown Opera House for the Thanksgiving Ball. Could you do much more than that in these days of autos?” The Columbia Oyster  House was on North Street just above what is now the Urban Moose. Note the streetcar turning the corner onto North Street. 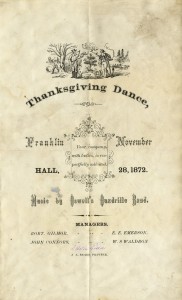 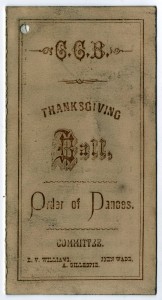 The Thanksgiving Ball was an important annual social event in both Calais where it was held at the Opera House and occasionally in one of the other halls in town and in Milltown which had its “Opera House” on Boardman Street. Built originally as a roller rink in the early 1880’s when roller skating was all the rage it was later converted into the community center and opera house. 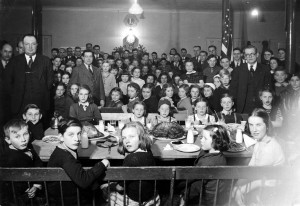 In the past many churches and civic organizations held public, free Thanksgiving dinners. The Baptist Church sponsored one for many years and,in the above photo, the Calais Lions Club saw to it that the children of the community had a proper Thanksgiving during the hard times of the Depression.

According to Fred Keene of Red Beach Thanksgiving was not such a big deal down on the farm in the late 1800’s:

“There were only two real holidays on the old farm– Fourth of July and Christmas. The other holidays, like Thanksgiving and New Year’s might be faintly observed with a little extra on the menu– turkey on the one and probably rabbit stew on the other.”

Thanksgiving was, however, the worst  possible day for the pigs on the farm who had been moved to the next spring’s potato field just before Thanksgiving:

“Well sir, them fellers worked in circles an’ crossed over, an’ went up an’ down the center till the ground froze. Grandfather rigged ‘em up some nose guards outer old leather boot tops, but it interfered with them eatin’ an breathin’ good, so jest  aforeThanksgivin’ we had Web Carlow come down with his outfit. When we come back from town (we never watched th’ proceedings) Web had ’em both trussed up to a big yeller birch in th’ stone wall, all pink an’ white. An’ that field was tore up so’swe never had t’ do a thing th’ next spring, but poke in pertators  an’ haul th’ sods over ‘em.

“We had pertators long before the last of th’ pork was gone. ‘Twas bacon from stem t’ stern, so’s to speak, two yards on both sides, jest edged with fat. Th’ lard was so tough we had t’ chop it inter junks afore Ma could fry it out, an’ right where we wanted it t’ be, th’ back pork was six inches thick.”

“Grandfather salted down th’ noses. Maw trimmed ’em and wound ’em round with yarn, then took a waxed-end an’ sewed leather covers: on ‘em. We played ball with ’em for several years– I dunno but I could find one of ’em now som’ers ’round th’ woodshed.”

–          Reverend McColl of St. Stephen preached a Thanksgiving service in Calais in 1815 when a state of war existed between the two communities, taking his text from Colossians Chapter 3, verse 15, “Let the peace of God rule our hearts”. The people on both sides of the border couldn’t have agreed more.

We’ll end with a century old and apparently famous recipe for Cranberry Pudding from Grandmother Crosby of Alexander who may have been known as Yola. We’ll have to check on this with John Dudley as the recipe comes from his newsletter.