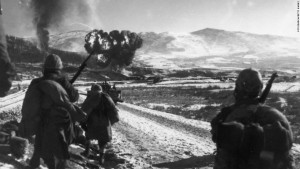 The year 1950, which marked the last year of first half of the 20th century, saw  the United States, still recovering from World War 2, drawn into a new war overseas and the attempted assassination of President Truman while other events of the year, largely ignored at the time, were ticking time bombs for the country.  The public was most occupied, of course, with the Korean War which began in 1950 with the surprise invasion of South Korea by the Communist North. The United States, through the United Nations, acted immediately by dispatching troops under Douglas MacArthur to push back the Communist forces which had advanced beyond  Seoul in their thrust south. MacArthur was a brilliant tactician and, as shown in the photo above, had soon not only repulsed the communist advance but U.S. Marines pushed across the border attacking the city of Hagura in North Korea. UN forces took the North Korean capital and advanced on the border with China at the Yalu River. MacArthur had been urged to exercise caution as Truman did not want to see the Chinese enter the war.  At this point both MacArthur’s military and political judgment proved wanting- he believed the Chinese would not intervene and, even if they did, he advised Washington had sufficient troops to prevail. He was wrong on both counts and when hundreds of thousands of Chinese troops attacked UN forces the battlefield situation became so desperate Truman threatened to use the hydrogen bomb. The aftermath of the Korean conflict of 1950 remains today one the world’s most dangerous and intractable problems. 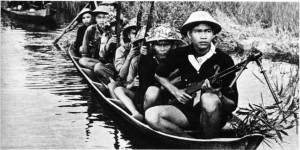 In 1950, when this writer was only 3 years old, there may have been a handful of people in the State Department and military who would have recognized the name Ho Chi Minh. Almost no one in the U.S. could have found Vietnam on the map. Yet when Ho Chi Minh, a Vietnamese nationalist and revolutionary, declared a war of liberation against the French occupiers of his country in 1950, the lives of many of my generation were altered forever. The Viet Minh, pictured above, were the name given the soldiers of Ho Chi Minh’s nationalist movement. They battled the French until 1954 when they finally defeated French forces at the legendary battle of Dien Bien Phu. The United States, then concerned about the spread of communism, became first politically and later militarily involved in a conflict which proved unwinnable at any reasonable cost in blood and treasure. Millions of us, who were just boys in 1950, got to travel halfway around the world as teenagers to view firsthand the war that began in 1950.

The Korean conflict is not alone is still being unresolved since events in 1950- the Israeli Parliament, the Knesset, declared Jerusalem the capital of the country of Israel in 1950, setting the stage for an endless conflict which is further from resolution today than at any time since 1950. Later in 1950 the State Department withdrew all of it consular officials from China, effectively ending meaningful diplomatic relations and Joe McCarty announced that he has discovered there were 242 “Commies” in the State Department although he could provide neither names nor proof. Truman denied the allegations but the witch hunt was on, many lives were ruined, including McCarthy’s and reputation of the United States as a nation of laws was severely damaged. In some 1950 good news Mother Teresa founded her Missionaries of Charity in Calcutta India. 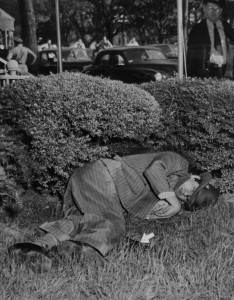 During renovations of the White House in 1950 President Truman had moved into the Blair House, normally occupied by the Vice President. Puerto Rico was then in the grips of a serious and sometimes violent independence movement. Two pro-independence nationalists, Oscar Collazo and Griselio Torresola plotted to assassinate Truman and armed with revolvers approached separate entrances to the Blair House. Thankfully for the President the assassins, while clearly fearless and willing to die for their cause were, as is often the case, not particularly competent. When Collazo approached the guard at the front door of the Blair House the guard’s back was turned and Collazo’s attempt to shoot the guard in the back would have been successful had he not forgotten to chamber a round in his pistol.  By the time he did so the alarm was given and while Collazofinally got off a shot it struck the officer in the knee. By then another officer had arrived and shot Collazo dead. Torresola had no more success. He did shoot the officer guarding the Pennsylvania Avenue entrance but the officer was able to lock the entrance before collapsing, mortally wounded. Torresola then ran to the front of the Blair House to assist Collazo where he was, as shown above, shot dead before he could reach the entrance. President Truman watched the attack from the window of his bedroom until ordered by the Capital police to take cover.

In other U.S. news the FBI’s most wanted list was first published- Willie Sutton made the list after robbing a bank in New York City of $82000 and the first credit card- Diner’s Club- was issued. In sports Bob Feller, who had experienced a rocky year in 1949 while compiling only a 15-14 record, was so embarrassed by his performance he demanded a $20,000. cut in salary- from $65,000 to $45,000. Later in 1950 he won his 200th game. Jackie Robinson’s salary was$35,000, the highest ever paid a Dodger. In 1950 an NBA basketball game between the Pistons and the Lakers ended with a lowest score on record, a 19-18 Piston’s victory. Sugar Ray Robinson won the middleweight crown and Ezzard Charles beat Joe Lewis in 15 rounds for the heavyweight title. Bob Hope made his first television appearance and James Dean first appeared on the silver screen in a Pepsi commercial. 1950 saw the debuts of Beetle Bailey and Peanuts, Disney released the movie Cinderella and Silly Putty hit the shelves. 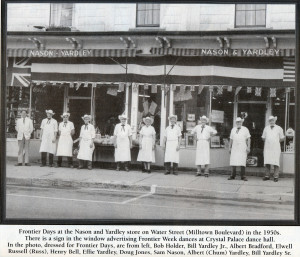 The St Croix Valley was a pretty quiet place in 1950 unless you consider the arrival of Aunt Jemima at Nason and Yardley’s on Water Street in St Stephen as an exciting event. The Courier reports as follows:

“Aunt Jemima in person arrived in town  and set up her miniature baking business in Nason and Yardley’s store, where she has since been dispensing pancakes and cakes made on the spot along with infectious good humor. The demonstration on preparing these treat has been attracting numbers of interested housewives along with droves of small fry who enthusiastically approve the whole idea. The demonstration is being continued all this week.” 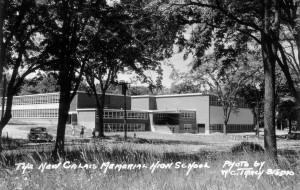 The new Calais High School was completed and ready to occupy in 1947. Calais Academy had burned to the ground in 1945 and for a couple of years had attended split sessions at the grammar school and in the Academy Street gym. Even the very old and decrepit South Street School had been reopened for classes.This photo shows the school in 1950, still new and in full operation. 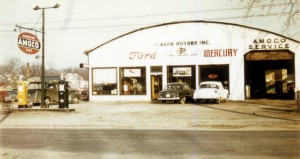 In 1950 Gibson Motors moved from Main Street to North Street where the Machias Savings Bank is now located. This photo was taken in 1954. It was the first automobile dealership to move off the Main Street but others soon followed as space was needed to display the new cars which were being made in many different styles, colors and models. Before our love affair with the automobile became really serious, the buyer simply ordered a car from the dealer and it was made at the factory and shipped from Detroit, several months later, to Calais on the train. The possibility a buyer would impulsively buy a new car off the lot was just a wistful fantasy for the auto makers in the early days but it soon became a very successful marketing model. 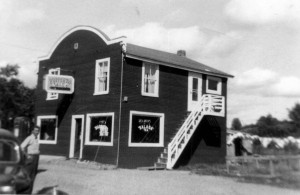 The above photo is Gibson’s garage on North Street at Knight’s Corner. It was owned by Ralph Gibson, father of Nellie and John Gibson. I think most of us remember John and Nellie is now Nellie Walton. The store sold gas, groceries, beer etc. Ralph ran the store until tuberculosis forced him to be admitted to a sanitarium in Presque Isle in 1951. Even as late as the 1950’s tuberculosis was a serious health problem and many in Calais suffered from its debilitating effects. His wife Lucy kept the store going until she too was stricken as were both Nellie and John. The entire family was in the sanitarium for a period of time, Ralph was there for 9 years but John and Nellie only a few months. Eventually Lucy and the kids were discharged and came back to Calais. Both Nellie and John were restored to good health. John eventually went to work for Immigration and Nellie, who graduated from Calais High in 1965, become a successful local businesswoman. The store was sold to Dick Barnard’s father but we don’t know what he did with it. Fitzzy Fitsimmons had a small ski-doo type business there for a while and in the 70’s  Bill McVicar and Vint Cassidy expanded it and opened a furniture business and later it was the motor vehicle office. It is now Bill Condon’s Pawn Shop although it is doubtful the original Gibson’s store survived the many changes. 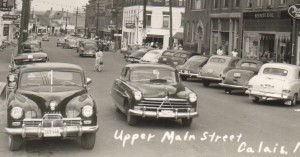 Main Street in Calais looked something like this in 1950.  Beckett and Company, Rutherford’s Jeweler’s and Lord’s Rexall are to the right. Stewarts Furniture is on the left as is the sign for the St Croix Hotel. Cole Bridges garage is in the distance at the center of the photo. All the store fronts were occupied in 1950 and the biggest problem Main Street faced was insufficient parking. The cars are about 1950, left is a Kaiser and to the right is a Hudson. Behind the Kaiser is a Mercury. The white car to the right with the temporary plate is a Fraser Vagabond, very rare. The back opened and slid out to convert it to a sort of pickup.

We should mention skunks- in 1950 skunks took over the town, at least one letter to the editor:“This town must be overrun by skunks- and I’m speaking literally in case someone thinks I’m referring to the two legged variety.” The writer pleads with readers to suggest any remedy at all except moth balls, which don’t work and shooting them as the writer” hasn’t fired anything more dangerous than a cap pistol twice in my life.”  We don’t know how this turned out but we do know Calais still has plenty of skunks although we express no opinion on how many legs the critters may have.