The TGIF crowd may be surprised to learn the historical acronym is TGIIF, thank god it isn’t Friday. Historically Friday has been considered the most unlucky day of the week, with Friday the 13th being exceptionally perilous. The St Croix Courier warned folks in 1896 to beware of 1897, a year when it was advisable to stay in bed. Consider, the year started on a Friday, ended on a Friday, 5 months had 5 Fridays and the year had 53 Fridays. As it turned out there was little to worry about- 1897 was fairly boring but as we’ve gotten started we’ll tell you about it anyway.

On the world stage there was, for a change, little military conflict although the Brits invaded Ghana and the Turks and Greeks had a short spat which the Greeks lost quickly and badly. Marconi sent the first wireless signal over water- 3.7 miles, marking the beginning of the age of radio, Joseph Goebbels was born and the worst earthquake in history struck Assam, India. The shock waves were felt over an area the size of Europe. A scientist for Bayer rediscovered aspirin, the formula having initially been discovered in 1853 but lost and Bayer went on to became a pharmaceutical giant. The eponymous Charles Boycott died leaving a legacy of tears and misery but adding a word to the English language. According to a newspaper account:

“1897 June 19, Charles Cunningham Boycott (b.Mar 12, 1832) English land agent in Ireland, died in England. He was a faulty estate manager whose tenants “boycotted” him into poverty; when the crops failed and the farmers went broke, he unsympathetically gave them the choice of paying immediately or being evicted. The farmers retaliated and his staff quit. His family was isolated. This tactic gave us the word whose last name became part of the English language.”

In the U.S. the famous author Thornton Wilder was born, his father was a Calais native. The unlucky William McKinley was sworn in as President but was assassinated before he finished his term. Mark Twain scotched reports that he had died in his memorable “The reports of my death are greatly exaggerated” letter. The Klondike Gold Rush began in earnest with one famous gold rusher, Jack London finding no gold but plenty of inspiration for his novels. The first subway in the country commenced operation in Boston with the opening of the Park Street subway station, the U.S. annexed Hawaii and the PTA was formed. Amelia Earhart was born, the first submarine with an internal combustion engine was successfully tested and you could buy a mail order revolver from Sears for 68 cents. (see below) 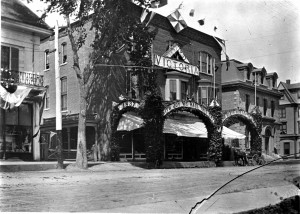 In the St Croix Valley the biggest event of the year was the Diamond Jubilee celebrating the 60th year of Queen Victoria’s reign.  It was the first time a monarch had been on the throne for 60 years and was a very important event to the British and its colonies. Queen Elizabeth has since duplicated the feat.This photo shows Water Street in St. Stephen decorated to commemorate the Queen’s Diamond Jubilee, to the right is the former Royal Bank Building. 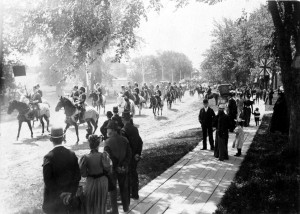 Most national celebrations were international in the St Croix Valley in those days, the parades crossed the bridges and all the dignitaries from the four towns participated in the ceremonies. The photo above is the Knight Templars on parade in MilltownN.B. during the Jubilee. The Queen’s birthday was a holiday in Canada and in 1897 was celebrated in conjunction with her Diamond Jubilee. All the kids had the day off in St Stephen although the Calais school kids were expected to be behind their desks. Not many were. According to Harold Davis’ history:

“Sometimes Calais tried to continue as usual, but the band, fire department, and at least half of the town crossed over to join in the fun. Calais school children always demanded but were rarely ever given a holiday, so a lot of them played hooky and went merrily over to St. Stephen chanting defiantly:

The twenty-fourth of May

Is the Queen’s birthday

If ya don’t give-us a holiday

We’ll all run away. 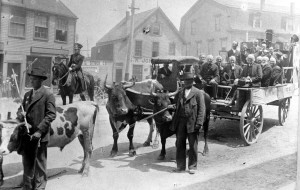 This photo shows the 1897 parade on the U.S side on Main Street. The library would be just behind the building to the left which has long since been demolished and is now the sharp angle of Triangle Park. As Ned Lamb so aptly wrote in 1945:

“Those who remember the two Queen Victoria celebrations (The Golden and Diamond Jubilees), know how heartily Calais joined in honoring the British Queen, and if there were not so many folks in Calais looking at the big parades, it was because the rest of them were over across in St. Stephen watching them. Every big parade crosses the bridges. Why the last Coronation Parade for the English King came into Calais marching to the lilting music of the Maine Stein Song. So why shouldn’t we celebrate the friendly relations between the places. July 1, Confederation Day, July 4, Independence Day. It was one of England’s great statesmen who, standing at the tomb of Washington spoke of him as the founder of the British Empire. Let us enjoy our friendship and the days of the Jubilee.

Calais had some of its own news in 1897, such as the fire at the St Croix Exchange which, after reconstruction, was renamed the St Croix Hotel 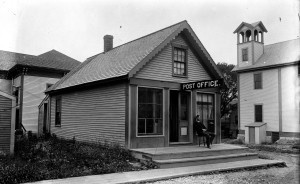 and the Milltown Postmaster doesn’t seem to be too excited about the Jubilee or worried about the fire at the Exchange in this 1897 photo on Boardman Street. The front legs of the chair are just right to provide the perfect balance needed for a short nap. Next door is Engine House 2 of the Fire Department. 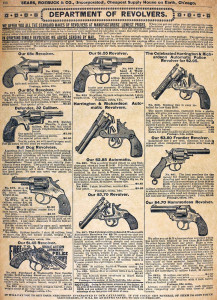 It’s always fun to check out the Sears Catalog for year we are featuring. It is full of interesting items in 1897 but none, we think, more interesting than the Department of Revolvers.They are remarkably cheap, $.68 gets you a 7 shot, nickel plated .22 and shipping is only a dime and much cheaper if, as suggested, you could get all the neighbors to buy one. For those getting express orders Sears suggested examining the gun at the Express Office which, if the examination included determining it the gun actually worked, could have made the job of  Express Clerk very dangerous. Congress eventually outlawed the sale of guns by mail order.