A list of the most eventful and important years of the 20th Century would certainly have 1951 somewhere near the top. The events which shaped the world for the next many decades and beyond began on January 1st, 1951 when Chinese and Korean troops began a massive assault against UN lines in Korea. The entry of China into the war was precipitated by General Douglas MacArthur’s unwise and unauthorized decision to cross the Yalu River into China which resulted in both the loss of his command and the loss by UN forces of most of Korea. By March 31st three million U.S. troops would be in Korea to stem the tide. During the first week of January, 1951 another Communist assault began which, while hardly noticed at the time, would eventually lead to the tragic involvement of the U.S. in Vietnam. The Viet Minh, Ho Chi Minh’s insurgent army, attacked Hanoi marking the beginning of the end for the French in Indochina. The U.S. decided to take up the fight from the French but could never do better than fight to a bloody stalemate.

Perhaps of more consequence than either of these wars was the beginning of the nuclear arms race in early 1951. The U.S. denoted its first hydrogen bomb, far more powerful than the atomic bomb dropped on Hiroshima, only to be match within a couple months by Russia’s first nuclear tests. The race to develop ever more destructive nuclear weapons was to consume and terrify the world for many decades.

In the U.S., the country was convinced the Russians had gained the expertise for the bomb from spies such as the Rosenbergs, who were tried for passing secrets to the Russians. The trial began March 6, 1951 and in less than a month they had been convicted and sentenced to death. The newsman Paul Harvey was arrested when, in search of a story, he climbed over the fence of the Argonne Lab nuclear facility in Illinois in an attempt to prove how easy it would be to gain access to the country’s most important secrets. He was caught within 20 feet of the fence and told not to do it again.

Science saw two far reaching developments: William Shockley won the Nobel Prize for what has been called the most import invention of the 20th century, the transistor, and the first commercial computer, the UNIVAC, was put in operation at the U.S. Census Bureau. In entertainment, the first color TV show was broadcast,  I Love Lucy, Amos and Andy premiered, and J.D. Salinger published Catcher in the Rye. The King and I opened on Broadway. In boxing, Sugar Ray Robinson won the middleweight crown and Rocky Marciano defeated Joe Louis for the heavyweight crown. In baseball, everyone was sad to see Joe Dimaggio play his final game but a couple of pretty fair outfielders played their first games in the major leagues, Mickey Mantle and Willie Mays.  Bobby Thompson of the Giants found the left field stands with his “Shot Heard Round the World” to defeat the hated Dodgers for the National League pennant but the Giants were crushed by the even more hated Yankees in the World Series.

Locally the year was remembered for what the newspapers called the “Big Blow of 1951” or the “Sardine Gale”. Fierce winds hit the area for nearly 24 hours resulting in substantial property damage and the loss of the sardine factory in Robbinston which went “out to sea”. 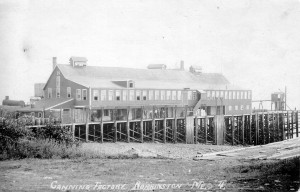 This is the Pike’s Canning Co to the south of the Holmes factory which was behind the general store owned by Bishop, Currier etc.It was completely destroyed in the Sardine Gale of February 7, 1951.

According to Ned Lamb writing  in the Calais Advertiser that week:

“But the greatest damage to the City was the destruction of the largest sardine packing plant in Robbinston. Quite a number of Calais people worked there including many women who were looking forward to the starting of the plant to earn the good money they did to help out in the home. It will be sorely miss­ed. The blow to Robbinston will be heavy. They must have been paying quite a tax and employed many of the towns people, but many of the expenses will go on.” 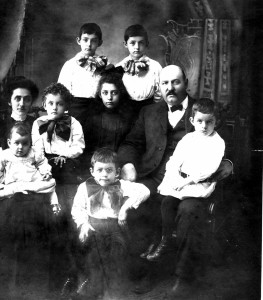 This photo shows the J.G. Beckett family in 1877. Beckett and Company celebrated its 100 year anniversary in 1951, having been founded in Calais in 1851 by the somewhat eccentric and others say erratic J.G. Beckett who in later years feuded with his sons over operation of the business and his creditors over nearly everything. He apparently didn’t like to pay lawyers to fight these battles so he went off to Harvard Law School in the early 1870’s and got his law degree although it doesn’t appear he actively practiced law. 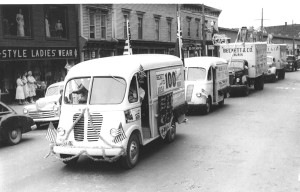 The 100 year anniversary was a big event locally. In addition to the store on Main Street the company was the biggest wholesale grocer in the area, serving almost all of this end of the county. A line of Beckett’s wholesale delivery trucks are seen above during a 1951 parade on Water Street, St. Stephen. 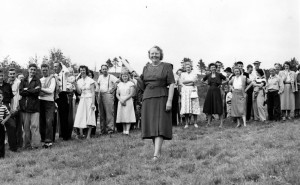 The Rod and Gun club was rented for a party and games. A favorite was the rolling pin toss. 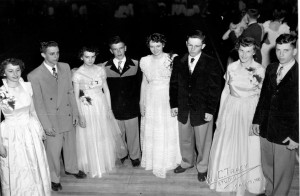 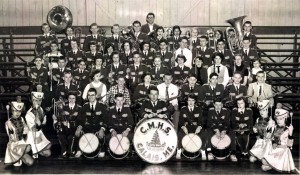 ….and the Calais High School Bank was reformed after a long absence. 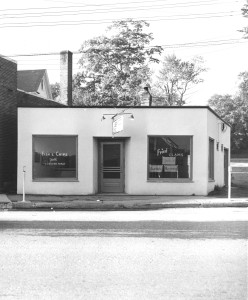 Some of you may recall this place, Ed Williamson Fish market built in 1951. It became a restaurant featuring fried clams and fish and chips. In 1961 Ollie Olsson took it over and renamed it the Angelholm. Today we all know it as Jo’s Diner.

Other important Calais news was the city’s purchase of its first police cruiser and the introduction of traffic lights at the corners of Main and North, Main and Monroe and Main and Union Streets. 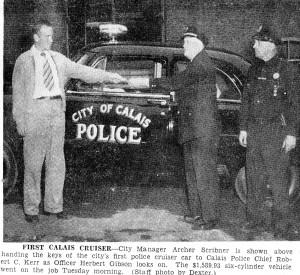