Born in 1865 in Pembroke, William Pattangall married Jean M Johnson of Calais in 1884 while he was studying law with the distinguished Calais attorney Archibald MacNichol. Craving adventure, he left the study of law for a time to sail “before the mast” as an able body seaman but after a couple of years returned to the law and politics. He became one of the preeminent trial lawyers in the state and eventually Chief Justice of the Supreme Court of Maine. He also held numerous political offices, ran for governor and was the editor of newspapers in both Machias and Waterville. 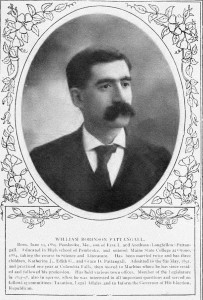 He was most famous, however,  for his writing, especially his biting political satire which is most evident in the “Meddybemps Letters”: a series of newspaper articles published under the pen name Stephen A. Douglas Smith. One such article took aim at the political situation in Calais 100 years ago. Our preeminent historian Ned Lamb wrote tells the story. By way of explanation George Curran was Calais’ version of Boss Tweed at the time.

“Once upon a time”, as those nice stories used to begin, there was born in Pembroke in 1865, a boy by the name of William R. Pattangall, who when he grew up, became a brilliant lawyer and a Democrat, or some would say a brilliant Democrat and a lawyer, but they should have said that he became both a brilliant lawyer and a brilliant Democrat. He was the editor of the Waterville Sentinel, member of the Maine House for four terms, candidate for Governor, At­torney General of Maine, Mayor of Waterville. All this shows the caliber of the man.

In 1903 there began to appear in the Machias Union a series of letters  signed by “Stephen Douglas Smith”, which jumped the circulation of the Union at once because so many wanted to see what Patt would say next, and who he would make a tar­get of with his wit. Of course he aimed at the members of the other political party and he could, and did, de­liver addresses of the most brilliant type.

He wrote the Meddybemps Let­ters under the name of “Stephen A. Douglas Smith”, but just why he took the name of the man who de­bated with Abraham Lincoln we do not know.

His eighth and ninth letters are dated from Calais. “Mr. Smith at Calais  Jan. 7, 1904”, his eighth is headed.  There is very little  about Calais in it, mostly Port­land. He wrote: “Both hotels are owned by one company, so the clerk told me this afternoon, but I sus­pected it when I read the bill of fare.” The next. letter, “‘Mr, Smith at the Syndicate Hotel”, is really about Calais. He says: “The principal in­dustry of this town consists of a steel bridge connecting it with the English side. The bridge didn’t cost over $50,000, unless it was built by the Calais City Government, in that case it must have cost more”.

“It has supported` a population of about 5,000 ever since, with the aid of tariff laws and the customs house officers”. “There is a statute of Henry Clay in the public square with this inscription on it: The Father of PROTECTION, the man who made smuggling possible. The Patron Saint of Calais,” “His name is not on it and many of the younger men think it is George Curran but there are many who remember farther and know better. No man here passes it without raising his hat and paying respects to it.” The first man I interviewed here was George Mur­chie. The only reason he hasn’t gone to Congress long ago he could­n’t decide whether to go there or to Parliament. If  ‘America’ and ‘God Save the Queen didn’t go to the same tune he would have twisted his tongue all up whenever he tried to whistle the National Anthem”. “Do you appoint County Officers? says I. ‘With the advice and con­sent of Mr. Curran, I do says he. `Where do the voters come in?’ I asked. ‘Since I took charge of the party most of them stay at home.’ say he, ‘to keep the Democrats com­pany.. ‘Mr. Murchie, will you give the your opinion, in full. on the Tariff, Trusts and Panama Question?’ `I haven’t one’, says he, but I think Johnny Miller ought to be pardoned out of jail before the spring election, and if we expect to carry Calais, they had better let David Osborne out too’.”

“ When I left his place I went down to see Mr. Curran. George Curran  is the man who built  the Washington County Railroad. Not alone, to be sure, but with practically no one to help him but some ignorant Italians and what spare money the taxpayers of this County could borrow.”

These are but samples of “Patt’s” wit, which runs through 25 letters under the name of “Mr. Smith”, and gives his attention to 25 leading politicians in the State (All Repub­licans, of course).