We came across an interesting article recently reporting on John
Trimble’s 1937 speech at the St Croix Club. The Club was a
“gentleman’s” club formed the late 1800’s to provide “gentlemen” of
the four towns, the Milltowns, Calais and Stephen, a place to
socialize and relax after a hard day in the shop or office. The 150
members were largely prominent citizens from both sides of the border-
Todds, Murchies, Eatons, Trimbles, etc.

“I have always felt that it was almost an accident the idea should
have developed and been discussed at a Lincoln Day banquet held in the
American House dining room February 12, 1896. It certainly was not
included in the plans of the group who arranged the banquet. After a
fine tribute was paid to Abraham Lincoln by Charles A. Boardman and
some interesting stories told by others, the suggestion was made that
a man’s social Club be organized. It received most favorable
consideration by all, and before the party broke up, committees were
appointed to under-take the job.”

It was decided to rent the H.F. Eaton building at the bottom of the
Avenue, a building which continues to house the St Croix Bowling Club
although the structure is much altered due to several fires.

“The committee on rooms for the Club, reported after looking over
various locations, the brick building owned and partly occupied by H.
F. Eaton & Sons, was the most suitable place, and was available or
would be with some changes. At that time, the lower half of the ground
floor, just as now, was used as offices. The upper half was an
unoccupied store which could be extended on the rear sufficient length
for a bowling alley. Part of the second floor was a tenement, or as we
say now, an apartment. It was occupied by Barry Grant, but he was
about to move. The billiard room was unfinished, but up to that time
had been used for small dancing parties. H. F. Eaton & Sons assumed a
very friendly attitude to the idea of a Club, and agreed to finish the
billiard room, make the necessary put in four alleys for a ten year
lease. The first meeting here was held the evening of March 10, 1896,
and the rest of the by-laws were adopted.”

As you can from the photos below the Club was beautifully laid out and
furnished with not only a bowling alley but a reading room, lounge,
billiards room and other rooms suitable to the relaxation of gentlemen
of the day. There was entertainment and the Club rooms became an
unofficial convention center.

“Henry B. Eaton was our President for ten years, and refused to be
elected again. During that period he was most generous to the Club in
many ways. He always seemed to get the most pleasure himself by giving
happiness to others. His wonderful banquets, with their elaborate
menus and musical programs supplied by the finest male quartette in
Boston, were events of a lifetime for most of us. They were happy
occasions for us but he was the happiest one present. These rooms have
seen some very fine social gatherings in the form of receptions to the
Presidents, ladies’ nights, etc., and I remember one in particular
about 30 years ago when Governor William T. Cobb was in Calais
overnight, and was tendered a reception here. Up to that time it was
an annual custom for the Governor of Maine to visit the different
Indian tribes and Governor Cobb was here to make his official visit to
Pleasant Point and Peter Dana’s Point. During the first ten years, the
Club kept open house on the occasion of visits to Calais by the
Portland Board of Trade, the Bangor Board of Trade, the Maine Press
Association, the St. Croix Valley Association of Boston, and in 1904
in connection with the celebration of the 300th anniversary of the
French Settlement on St. Croix Island, the Club gave a luncheon party
for the officers of the warships that participated There was one ship
each representing France, England and the United States. The officers
were brought to St. Stephen by the Canadian Cruiser Curlew,
transferred to the Club in buckboards, and given an elaborate lunch, I
remember lobsters especially, by a committee of which Charles A.
McCullough, then U. S. Consul at St. Stephen, was Chairman.”

By 1937 much had changed and many of the changes were unwelcome to
John Trimble. His obituary tells us he disliked cars and many of the
other changes which had occurred in Calais during his lifetime:

“The first Club picnic was held at Bedfords Beach, Oak Bay, and all
transportation was by boat except a few went by team. The next year
the picnic was at the same place, and there was one automobile by that
time. Now everything is cars. Boats are too slow. The biggest change
in the appearance of these rooms came when we substituted electricity
for gas in lighting. In the beginning gas was in general use through
the building, and we tried the old flat flame burners, and newer
burners with mantles. You newer members can hardly realize the
difference in your beautifully lighted rooms, billiard tables and
alleys, over our old style of lighting when the Club was first
started.
And too, the view or picture we see from our windows has all changed.
From the Billiard Room windows in those early days, we looked out on a
busy river, with steam boats and tug boats plying back and forth. Down
on the Eaton long wharf ten or twelve schooners would be loading
lumber for shipment to other ports. Train loads of lumber would be
passing, bound for other wharves, and vessels, and we would hear the
rumble of six horse teams also loaded with lumber, rattling down the
hill. Clanging past the front door were electric street cars, and
horse drawn teams of all kinds, some good looking rigs of horses and
buggies in Summer, and sleighs and pungs in Winter. Today the rear
view of activity is all gone. Main Street is all cluttered up with
automobiles, busses, freight trucks, gasoline trucks and beer trucks,
quite a change from the good old days. 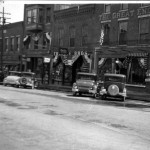 Trimble Bros Shoe Store where John and his brother sold shoes for many decades. They also had a shoe factory where the EMEC garage is in back of Customs but this burned in 1914. 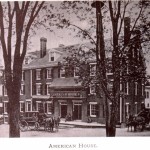 The American House, now the Masonic Hall, on the Avenue where the Club plan was hatched in 1896. 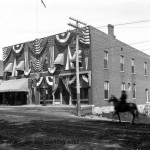 The St Croix Club in the early years- no cars, buses or beer trucks in evidence. 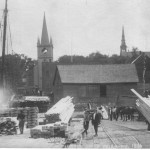 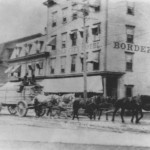 A six horse team hauling cut lumber from the Milltown mills to the Eaton long wharf for shipment to the far corners of the world or at least to the Caribbean where rum, molasses and sugar filled the holds for the return journey. John Trimble regretted the passing of this mode of transport, he refused to own a car but was one of the first in town to buy a bicycle. 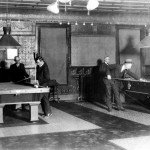 An interior view of the St. Croix Club. 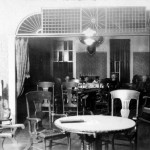 An interior view of the St. Croix Club, showing the reading room. 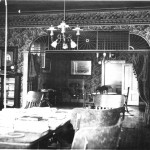 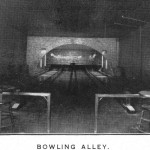 An interior view of the St. Croix Club, showing the bowling alley.