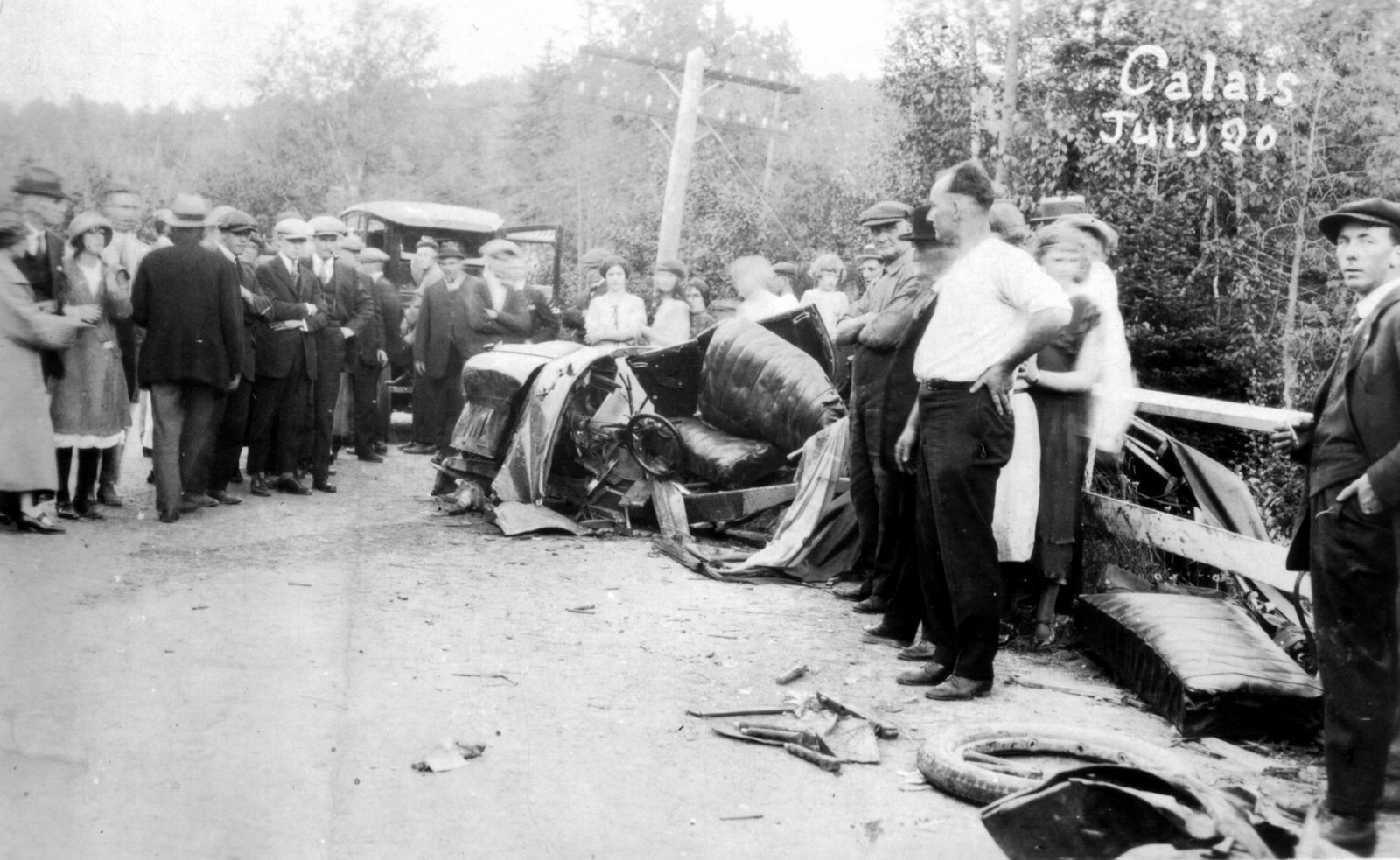 Dick Barnard asked us for some photos of the State Police officers who served this area back in the old days as the fire hall restorers want to include a memorial to state troopers in the building. We thought this a great idea and it motivated us to do some research on those fellows-it was only fellows back then of course and we decided to share what we discovered.

As far as we can tell the first State Police officer in this area was William “Hoot” Gibson, born in Milltown, Maine in 1876. As a young man he worked in the Cotton Mill and as a blacksmith but in 1923 became a State Trooper. He was then living at 34 South Street in Calais. Perhaps this is when he acquired the nickname “Hoot” for having a nickname was common for troopers in those early days. We don’t have a photo of Hoot unless he is one the fellows in the photo above. He was the investigating officer of the accident which occurred on the River Road in 1924 and was one of the deadliest car accidents in the early motoring history of the state.

On July 20, 1924 Bert Spinney of Calais decided to take a spin in his Maxwell Touring car, the family car of the day. It cost $700 new which may have been the reason the notoriously cheap Jack Benny always drove one. For company Spinney took friends Tommy Hinds and his son Morris, William Thompson and Vernald Powell, reportedly all for their first ride in an automobile. The party headed down the river road at, according to the newspaper account, a “moderate speed”.  At about the same time Bert Spinney left Calais Hoot received a call from his counterpart in Lubec reporting a speeding automobile heading toward Calais. In Red Beach Hoot tried to stop the vehicle, a Hudson driven by James Sullivan of Lubec but Sullivan ignored the officer. A high speed chase ensued which ended when the Sullivan vehicle collided head on with Bert Spinney on the corner which became known as “Dead Man’s Curve”, a name since forgotten but the scene is the sharp corner at the Pike’s Woods picnic area, about three miles south of Calais. Spinney, William Thompson and Thomas Hinds were killed, Powell and Morris Hinds injured. Sullivan received almost no injuries and was taken by Hoot before the magistrate where he was arraigned for manslaughter and despite the pleas of his lawyer, John Dudley, held on $10,000 bail. At the October term of the Superior Court Sullivan was fine $1000 and sentenced to 10 months in the county jail. 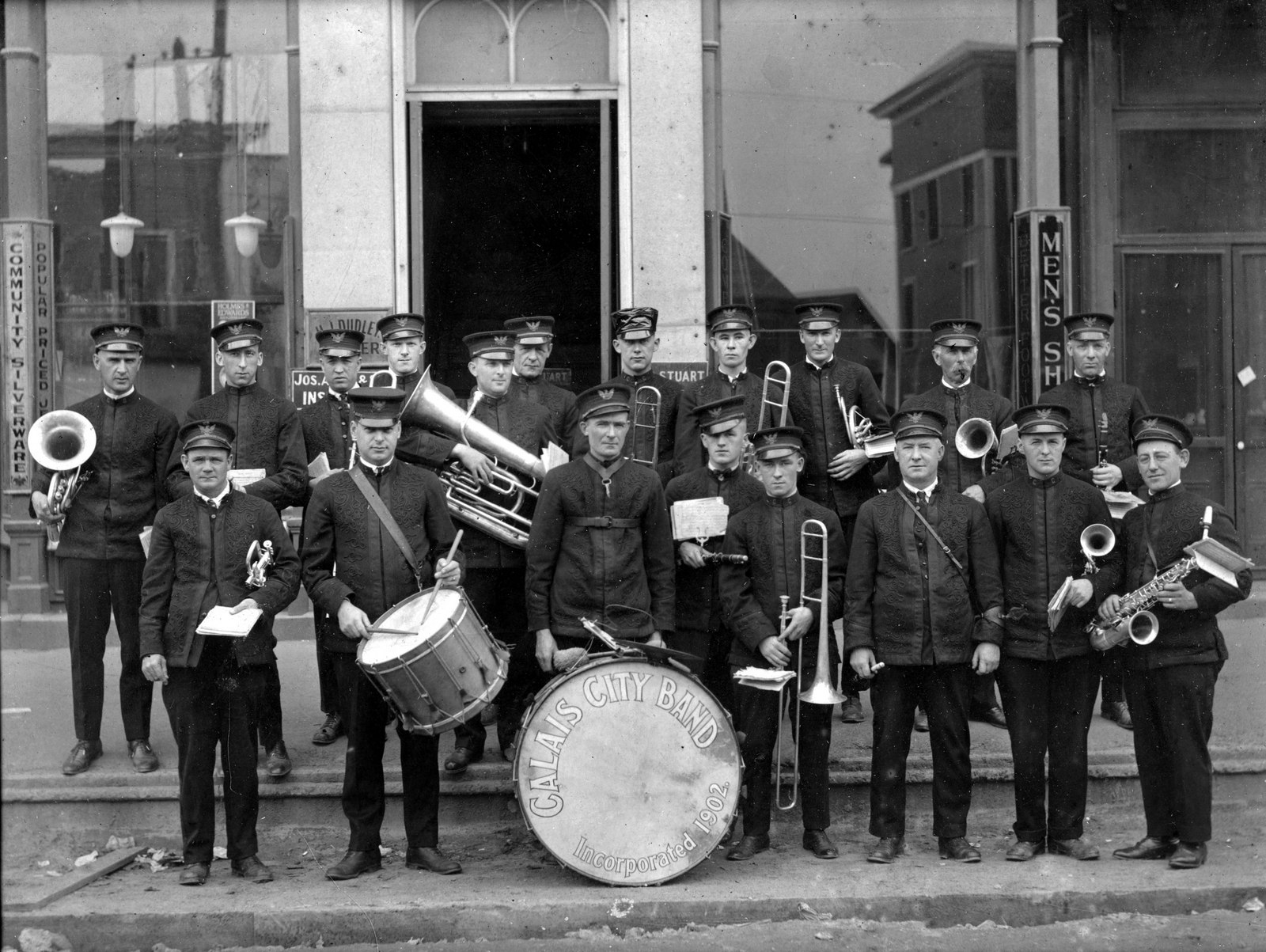 When Hoot retired he was succeeded by Trooper Frank Billings who lived on Franklin Street. We don’t have a photo of Frank in his state police uniform but we have several of Frank playing the drums in the Calais City Band. In the photo above he is second from the left in the first row. Music was Frank’s passion and in the days of silent movies Frank showcased his musical talent at the Opera House. The photo above was taken on Main Street in the brick block directly across from the St. Croix Hotel, now nearly as distant a memory as the silent movies at which Frank and the excellent pianist Ida Creamer often provided more entertainment than the movie. According to Carol Allen, formerly Carol Smith, the Billings family left Calais in 1948. 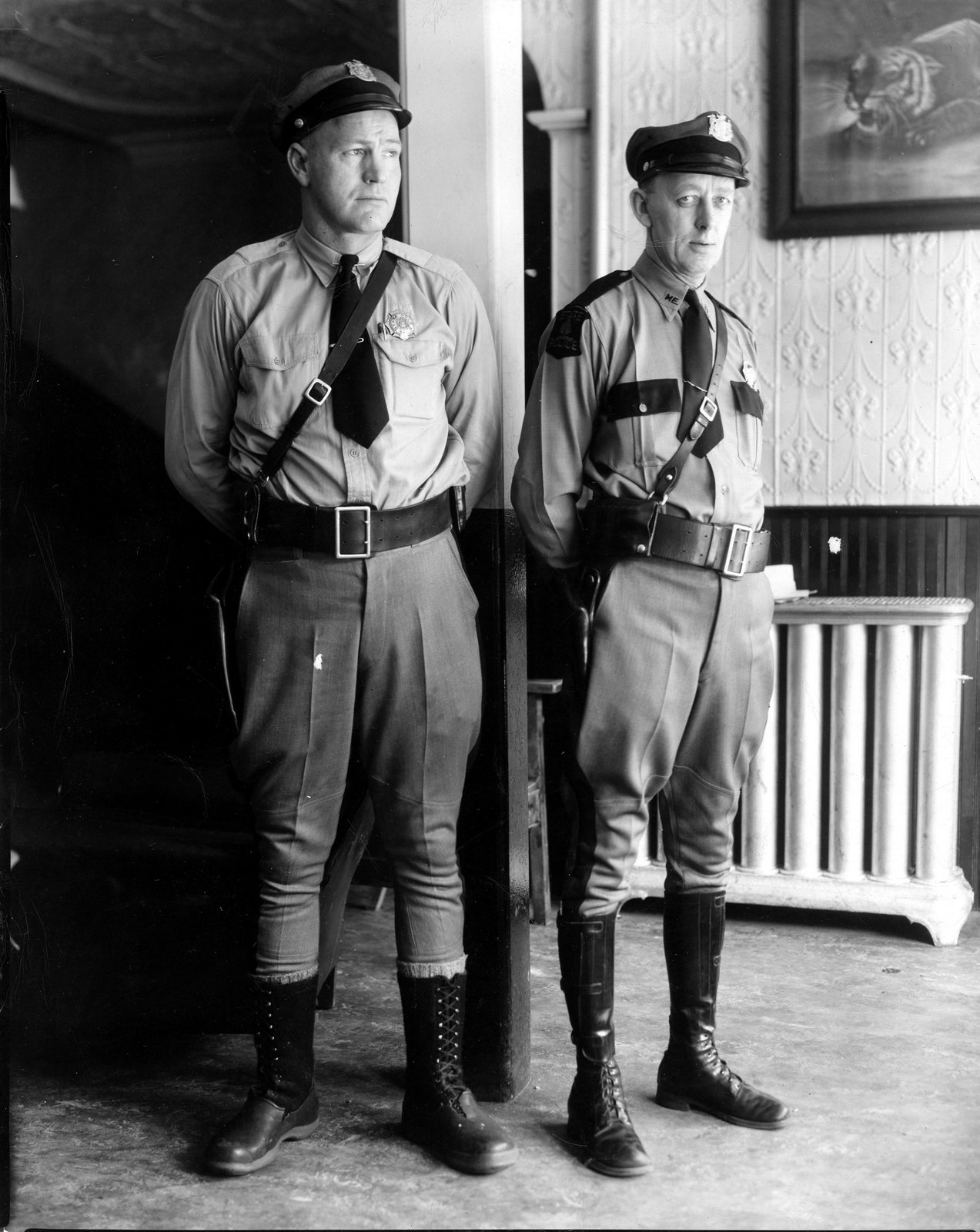 Pictured above are troopers, Harold “Shorty” Johnson on the right and Frank Lyle “Moose” Harriman on the left. Shorty’s patrol area in the 40’s and 50’s was mainly Calais and Moose was responsible for Baileyville into the 60’s we believe.  Shorty lived in Calais on Elm Street and spent many years as a driver for Charlie Cone who operated Calais’ first taxi service out of the Cone Stables on Main Street in Calais. Rogers Auto Body now occupies this lot. Other drivers for Cone were “Fibber” Hornbrook, father of John and Willard Hornbrook and Henry Jensen who always drove the large Buick touring car for the service. We aren’t sure when Shorty became a State Trooper but he was still a trooper in 1946 when he attended Hoot Gibson’s funeral. His name disappears from the Calais phone book in the mid 50’s so we assume he died in the early 50’s as he is buried in the Calais Cemetery. We do know he was a close friend of Moose Harriman. 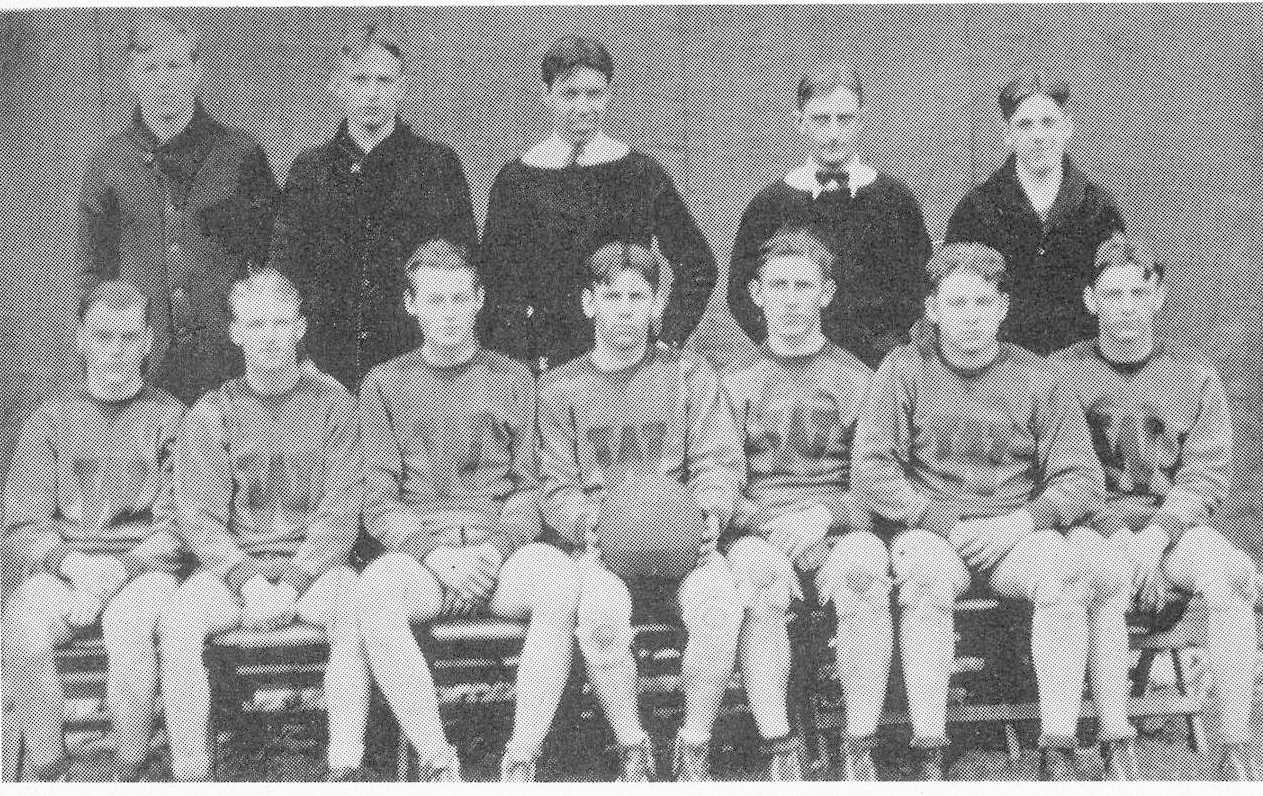 Frank Lyle “Moose” Harriman was a Woodland native who graduated from Woodland High School in the 1930’s. We understand he was an outstanding basketball player in his day. He became one of the most respected and popular State Troopers in the area. Moose is top row, far left in the 1930 Woodland basketball photo above. Moose had a brother Alonzo who worked at the Woodland Mill who was also, to everyone’s confusion, sometimes called Moose especially after this brother’s death in 1967. Moose must have become a State Trooper sometime in the 1940’s as his marriage certificate dated August 31, 1940 with Grace Messer lists him as a laborer and Grace as a Cotton Mill worker. During the time he served as a Trooper he  made a favorable and lasting impression on the community. 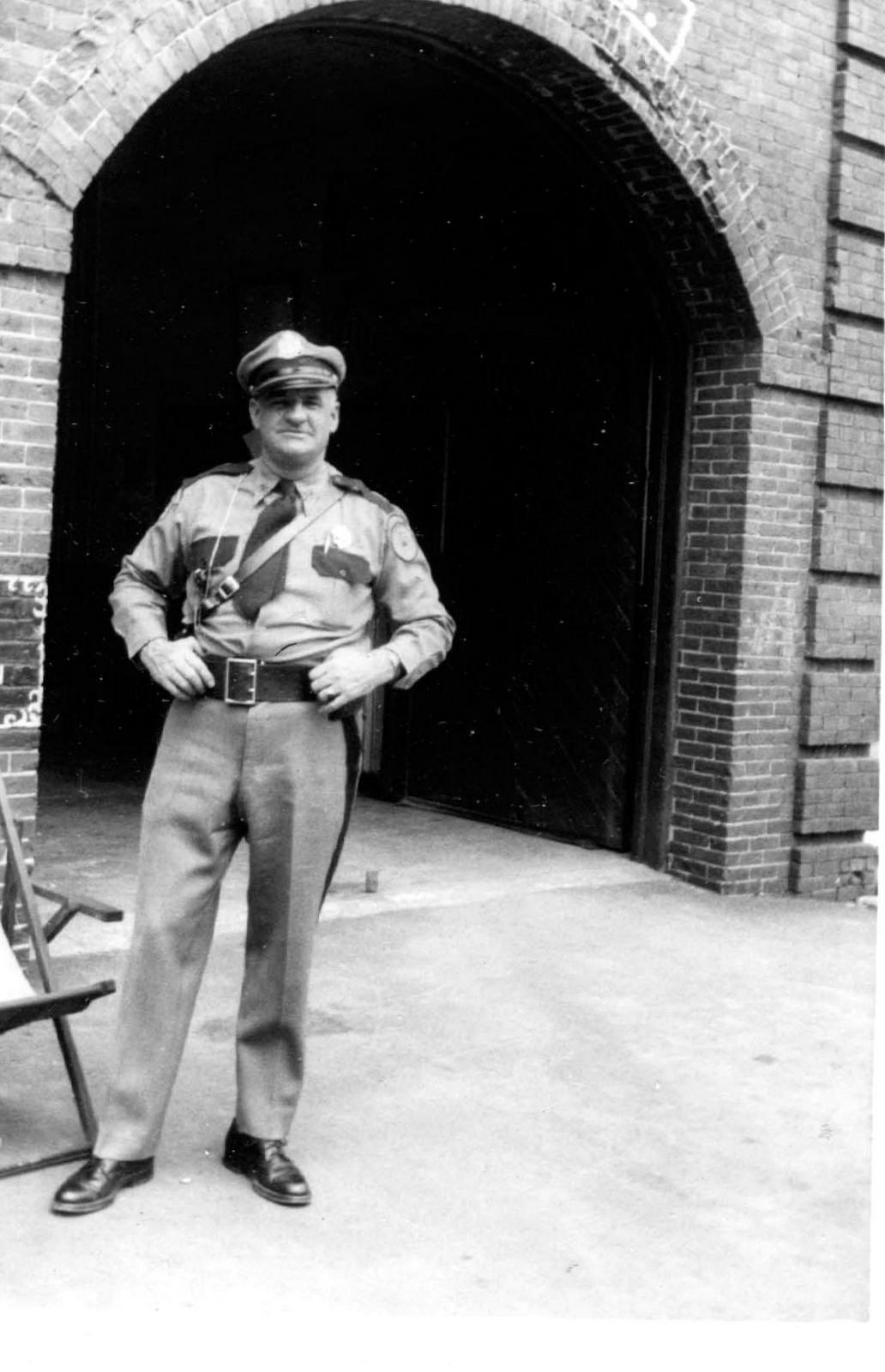 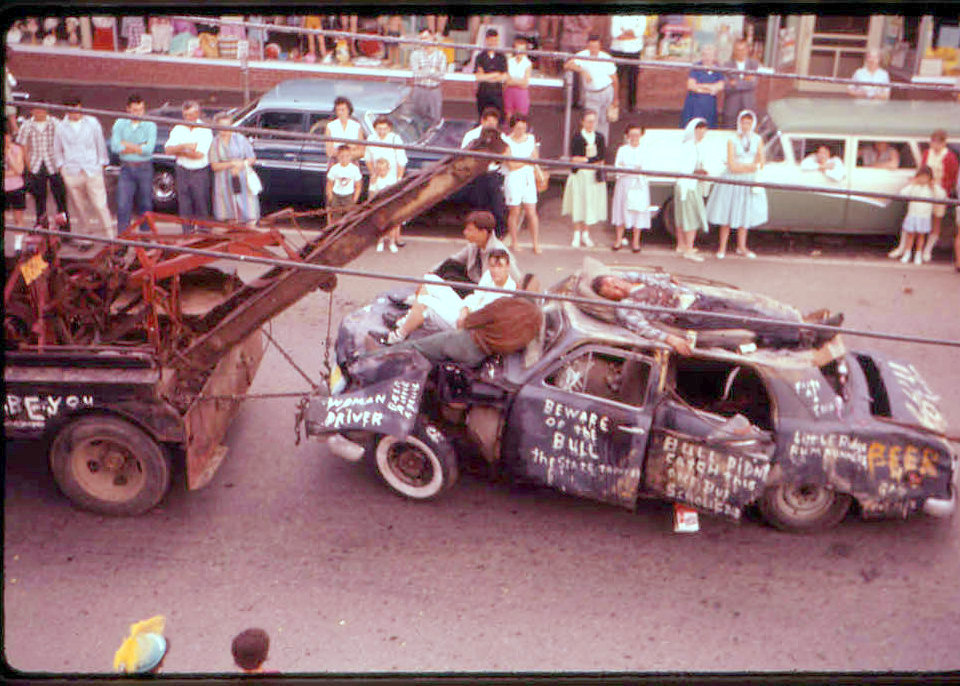 Bull Powers needs no introduction to those who grew up in this area. We’ve written extensively on Bull so those who want to read about him can follow this link. Bull Powers He’s connected to both Shorty Johnson in a very personal way and to Moose Harriman because their service overlapped a good deal. In fact in the 50’s the State Police had an office in the Calais City Building. On the glass of the door to the office were painted a bull and a moose. As to Shorty, Bull married his widow Rachael after Shorty’s death and moved into the Johnson home on Elm Street in Calais. Bull and Rachael share a lot at the Calais cemetery. 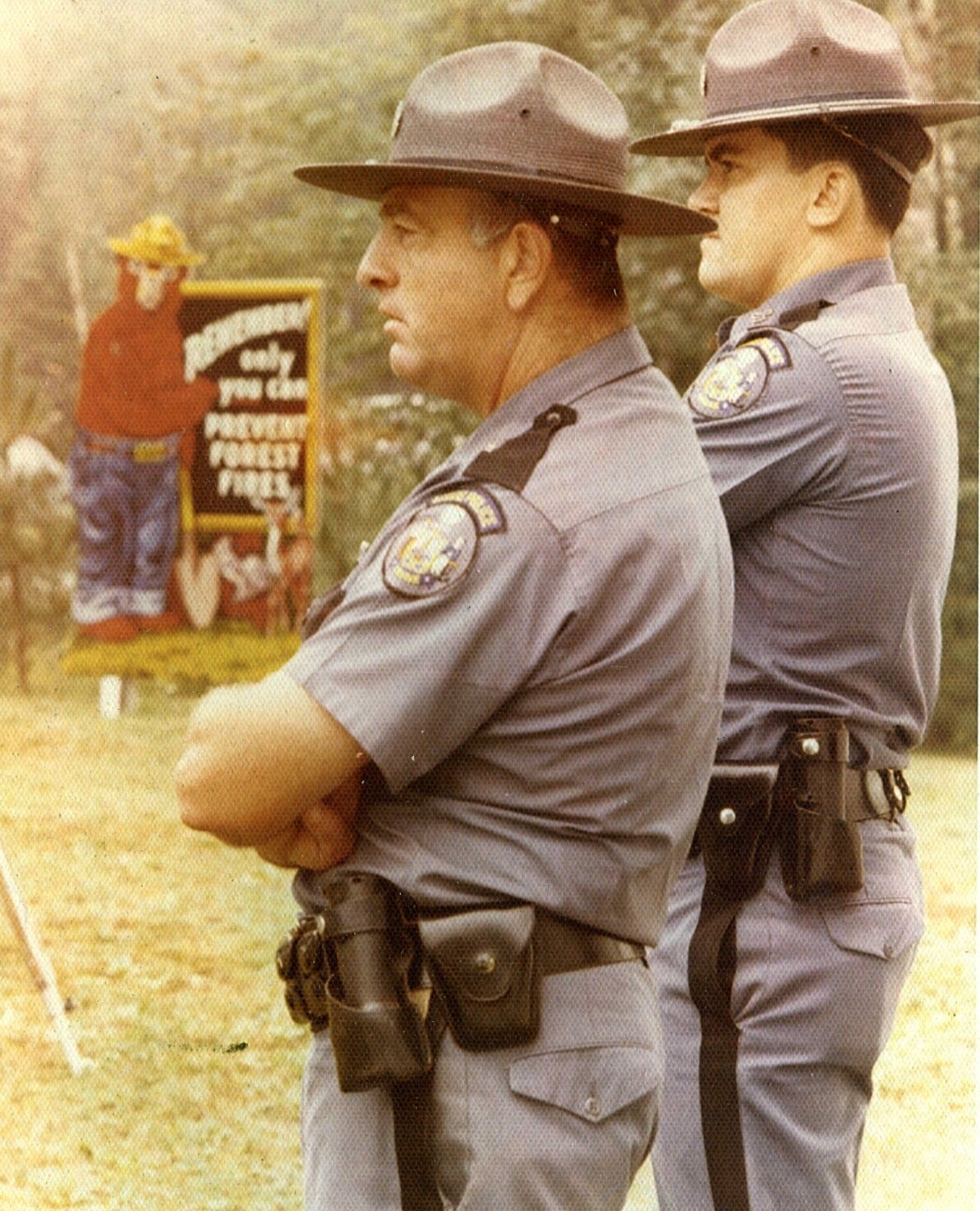 Another trooper who served the area for many years was Bob Desjardin of Princeton. He’s in the foreground above. If Bob had a nickname we are not aware of it. This does not mean he was not loved and respected in the community because there are few who met him, either personally or professionally, who didn’t have a high opinion of him. Unfortunately we don’t have as much Princeton history as we would like so cannot tell you a lot about Bob’s background. We have not been able to identify the other trooper in the photo. 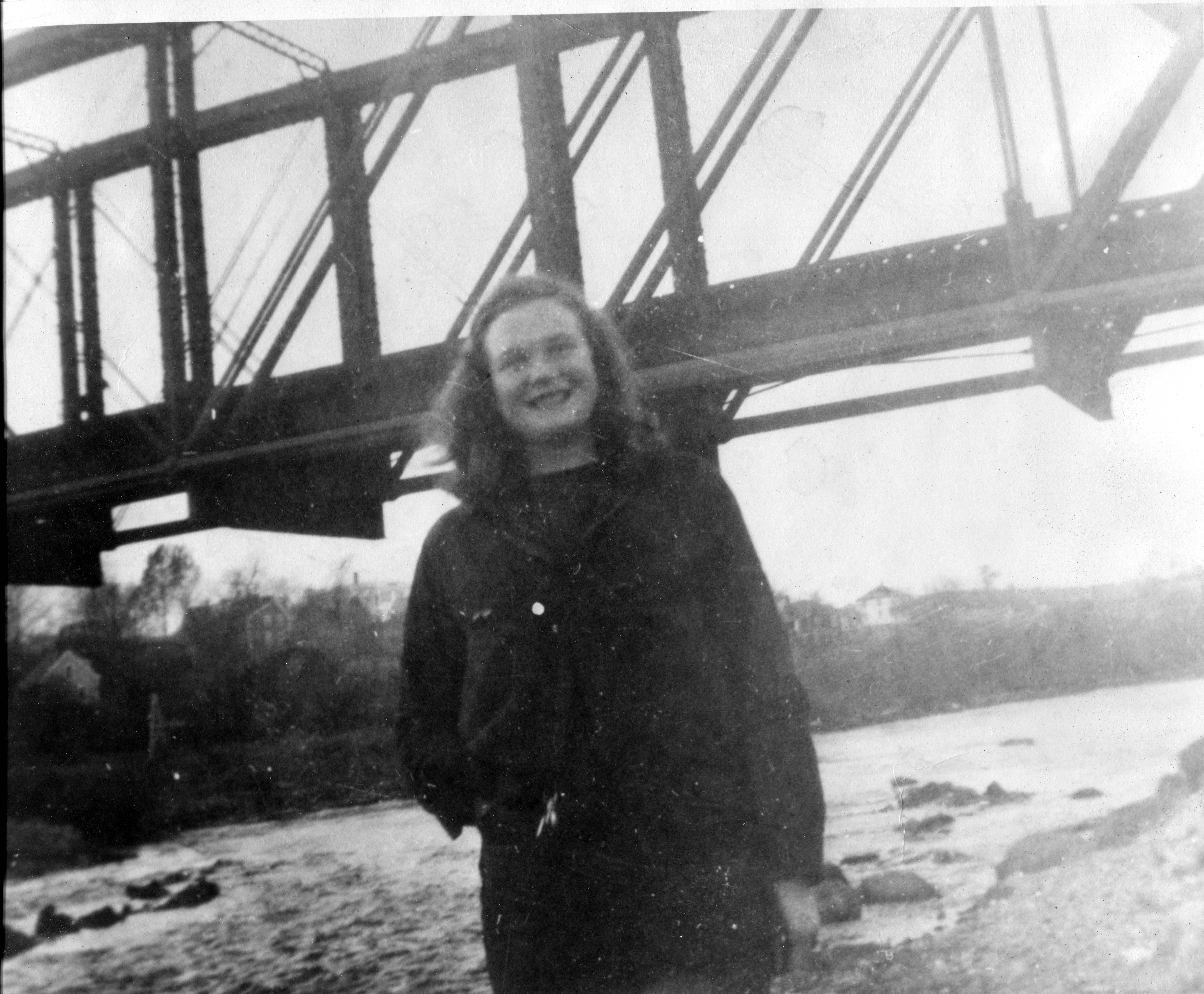 We do know his wife Lily pictured above at 14 was a delightful person. We have this photo because the bridge behind her is the Vanceboro railroad bridge which Werner Van Horne, a German officer, attempted to dynamite during the First World War. She kindly gave it to us when we were doing an article on the incident. 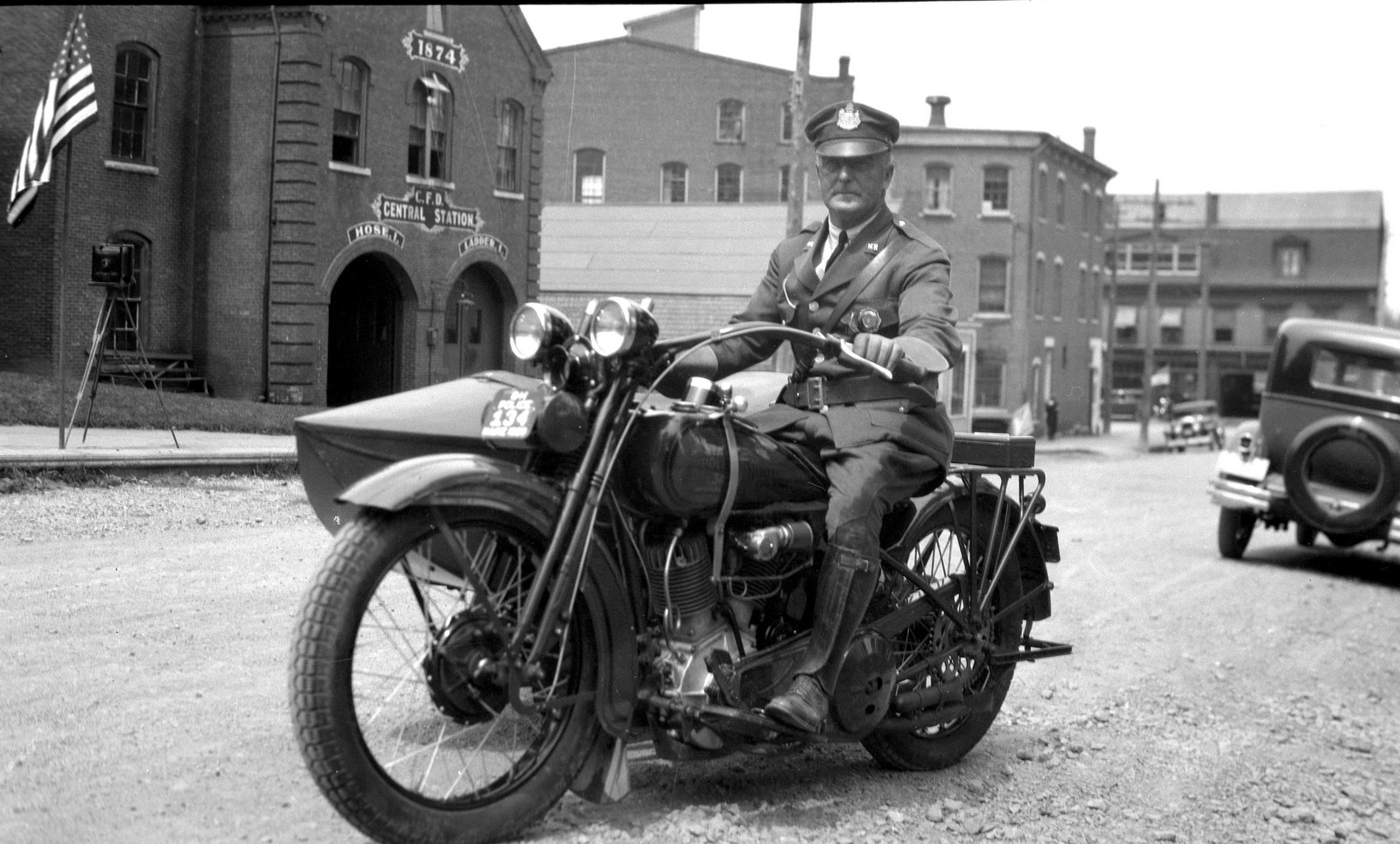 We have another photo of a State Trooper on a motorcycle in front of the Calais City Building circa 1930’s perhaps. We’d like to identify this officer and could use your help. The cars are very old. Is it possible it’s Hoot?  We would also like to mention Trooper Adelbert Sargent of Princeton who captured two German POW escapees from the POW camp in Princeton during World War Two. We haven’t been able to obtain any information on him or on Trooper Herb Leighton who we think was from Charlotte. Any corrections or additional information you can provide would be very helpful to us and the folks doing the State Police memorial exhibit at the fire house.