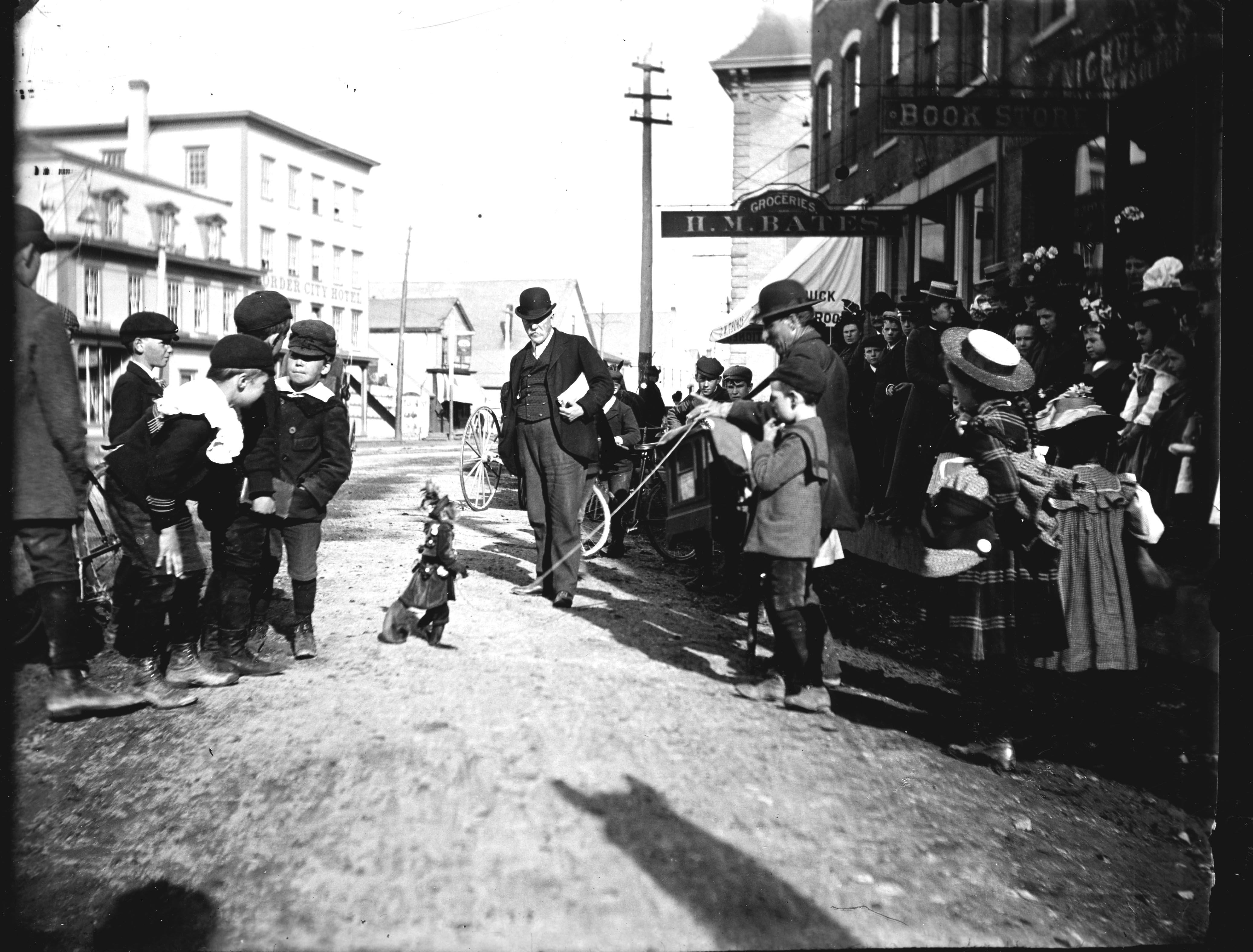 The photo above is one of our favorites. It shows a street entertainer commonly called the hurdy-gurdy man performing in Calais in 1896 on Main Street near where the Schooner Restaurant is located today.

Ed Boyd, a noted local historian from the 1940’s and 50’s and who could have been one of the excited boys in the photo describes the scene:

THE HURDY-GURDY ORGAN GRINDER IN CALAIS

Turn backward, turn backward, O time in your light and bring back the fond memories, which brought such delight and lore to the youngsters of Calais in the days of yore.

This picture is one that many oldsters and citizens of Calais will remember well. It portrays quite vividly one of the chief delights of their childhood days in the border city. For this was a time when there were no TV’s, radios or stereos to arouse the interest of the children to fire their imagination. So indeed it was a gala event when the organ grinder made his appearance on the streets in Calais and paraded up and down the main street of the city, and much like the pied piper of old he never failed to attract the youngsters from far and wide.

The grinder was almost invariably an Italian, a musical gentleman possessed of a swarthy complexion and a ready smile for all contributing children. He was quick to distinguish between those youngsters who were content to stand on the fringes of the juvenile crowd and merely watch the monkey’s antics, and those who stepped boldly forward to positions where they could pass the lively creature such pennies as they clutched in their small hot hands.

The little monkey was also a creature of great discernment, as he doffed his tiny red cap only to youngsters who passed him genuine pennies or a rare occasional nickel, never to those who tried to play tricks by offering coat buttons, and other such items.

His dances were indeed comical to watch to favorite Italian tunes ground out by the wheezy little organ, he would cavort in the liveliest fashion, occasionally spinning about and leaping high into the air in ecstasy of monkey energy.

Thus the organ grinder and his lively little monkey is now, what one might say past history on the streets of Calais which are gone, but not forgotten.

One of the many events that occurred a long time ago, never the less they still remain with me as one of my most memorable and inspirational treasures of my childhood days of long ago. This photograph was taken on Main Street near the intersection of Church Street around the turn of the century.

Note the dress of the spectators- even the street urchins in the foreground seem to be “dressed up”- caps and jackets, with even an elegantly fringed collar on one. The young ladies were similarly hatted and nicely turned out and the adults are all seem to be wearing their Sunday best. In fact this may not have been a special occasion at all. Folks in those days and up through the 1930’s rarely went out in public, even to shop, without donning their best clothes and never without a hat or cap. Quite a change from the shoppers of today 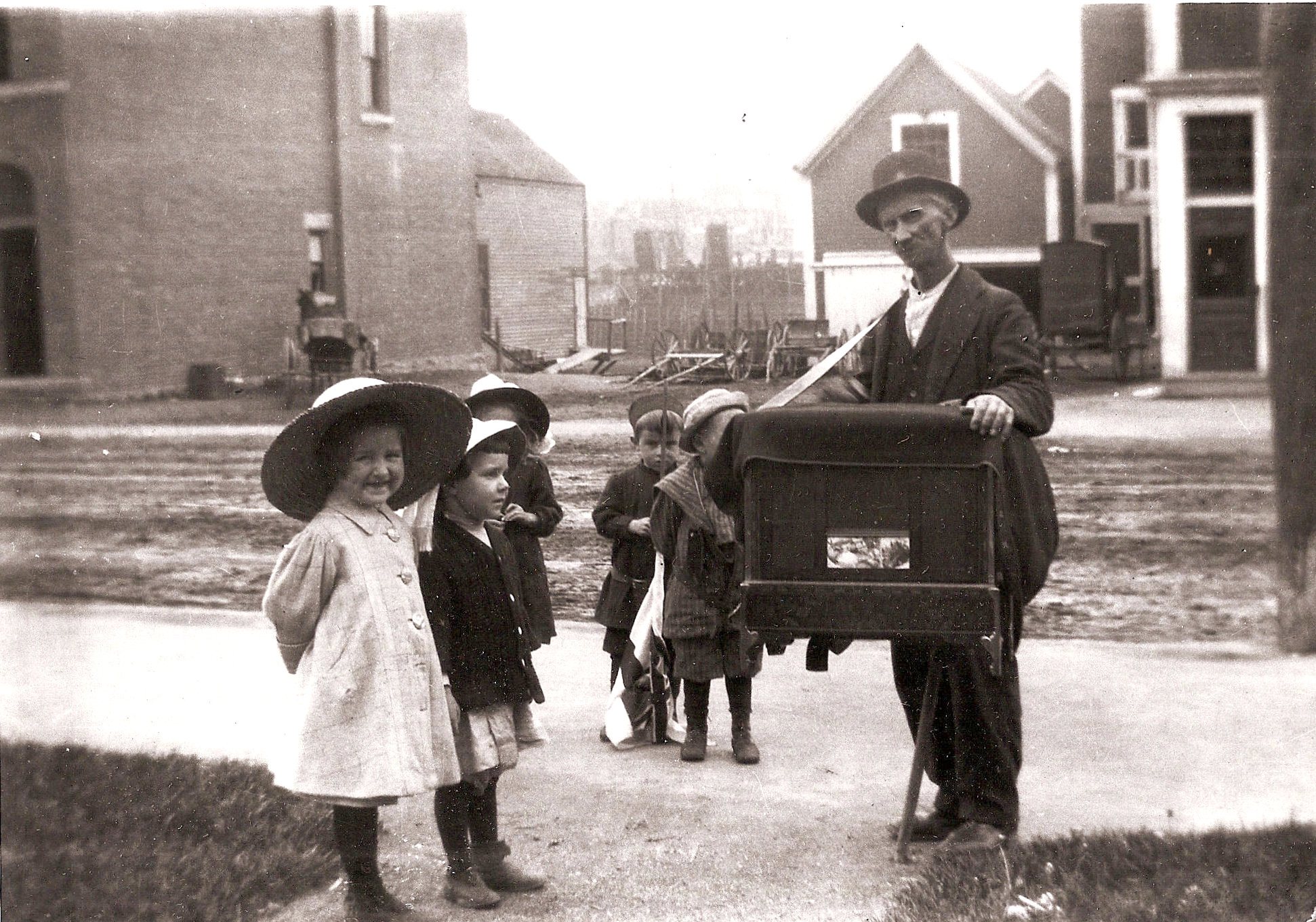 How long did the hurdy-gurdy man ply his trade in the St. Croix Valley? We don’t know for certain but according to the St Croix Courier the above photo was taken before World War One on Water Street.  The photo caption reads:

This is supposedly a photograph taken the last time a hurdy-gurdy man visited St. Stephen, perhaps in 1910. As he would turn the handle on his small music making device, either he or a trained monkey would attempt to collect pennies from the audience.

There doesn’t seem to be a monkey assisting this poor fellow which must have been a serious drawback when trying to entice children to part with their pennies. The young lady to the front left wearing the large hat is one of the Ganong girls.

Even if the popularity of the hurdy-gurdy man faded with the turn of the century he was an important entertainer in many celebrations in the 1800’s as shown by this St Croix Courier article of June 27th, 1872 describing the paucity of activities on the program for Calais’ upcoming 4th of July festivities:

Independence Day will be celebrated by the patriotic citizens of Calais by steadfast attendance upon the Stone and Murray Circus. Only this and nothing more. It is suggested that strenuous efforts be made to secure the presence of a hurdy gurdy or at least a harp and fiddle for the outdoor amusement of the descendants of the Pilgrim fathers. 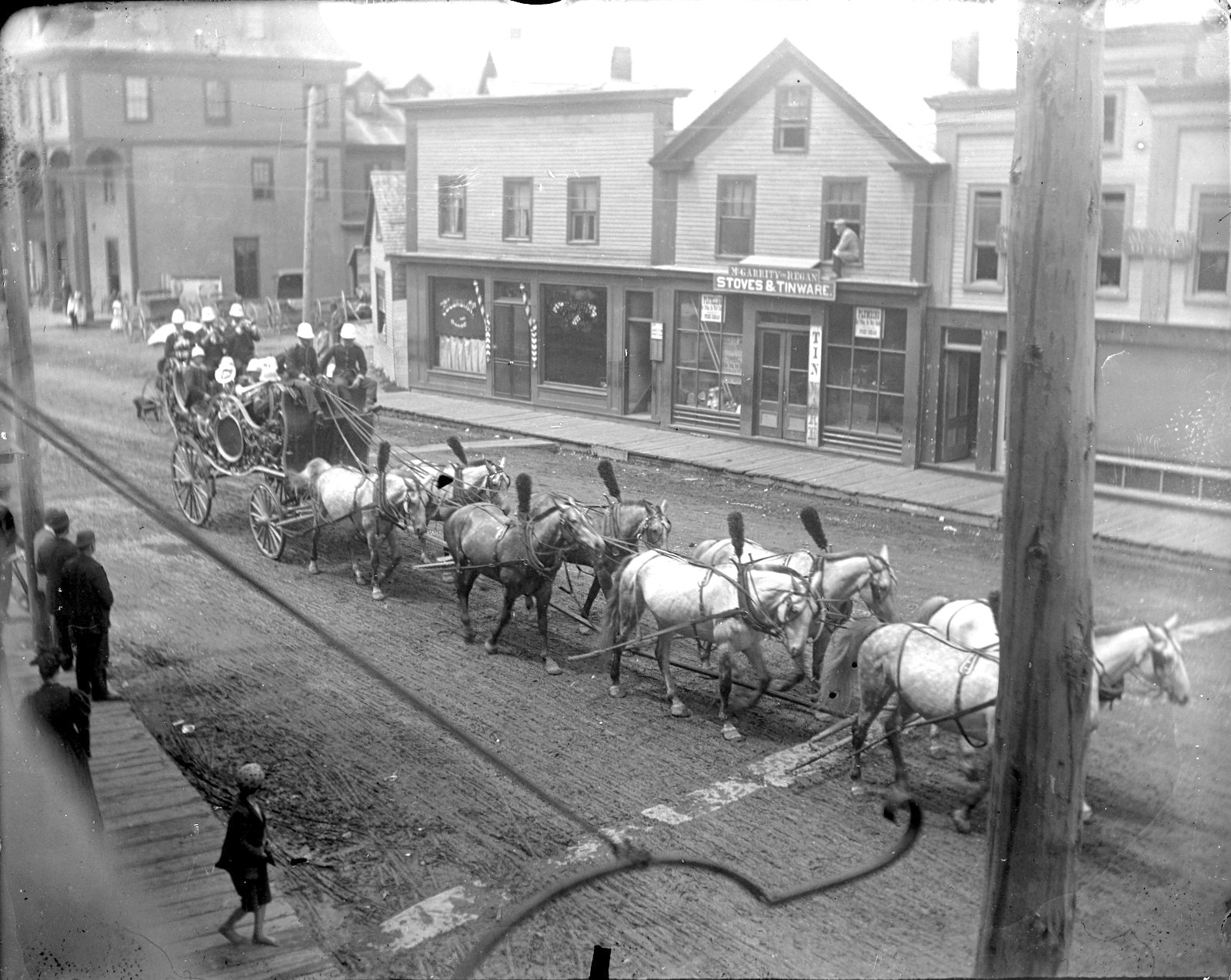 The Stone and Murray Circus mentioned in the article would probably have arrived on the third of July because the circus itself was always preceded by a parade through town like the one shown approaching the corner of Church and Main Streets, almost exactly the spot where the hurdy-gurdy man was performing in the first photo.  According again to Ed Boyd the Stone Circus first performed in Calais in 1836 at Dyer’s field which is today the empty lot across from Roger’s Auto Body and was one of the regional circuses in this area although, if the promos for the circus could be believed, there was none better anywhere.

Above is the first one column of the Stone and Murray Circus Ad from St Croix Courier in 1869. The advertisement, which took up much of a full page read, in part:

THE BEST EVER SEEN

The Press Teams With Laudatory Eulogies and of the EXALTED EXCELLENCE of the Mammoth Troupe and OVERFLOWING AUDIENCES , fashionable and critical, attest with rapturous applause and other manifestations of popular delight the PROLIFIC TALENTS of the Matchless Cluster of the LEADING CIRCUS OF THE WORLD.

Included in this “Matchless Cluster” of artists were M’lle Emilie Henritta Cooke, The Premier Equestrian of the world, John Henry Cooke, The Champion Rider of the Universe, the Talleen Brothers, the Amazing Gymnasts from the Hippodrome, Paris, their first season in America, Sig Columbus, the inimitable Italian Contortionist, his first season in America, Den Stone, the popular American Clown, Sig. Ferdinand Sagrino, Champion Spanish Rider, Burt Johnson Champion Leaper and Vaulter together with “Acting Dogs” “Trained Horses” and “Comic Mules”.

Quite an array of talent to be sure but surprisingly there is no mention of lions, tigers or the other exotic animals one would expect to find in a circus which is odd because as early as 1829 a circus, called by Robbinston historian Richard Hayden a “carnival” arrived at the Mansion House in Robbinston with a much superior cast of exotic animals including lions, a tiger and a leopard, far more than Stone and Murray had to offer: 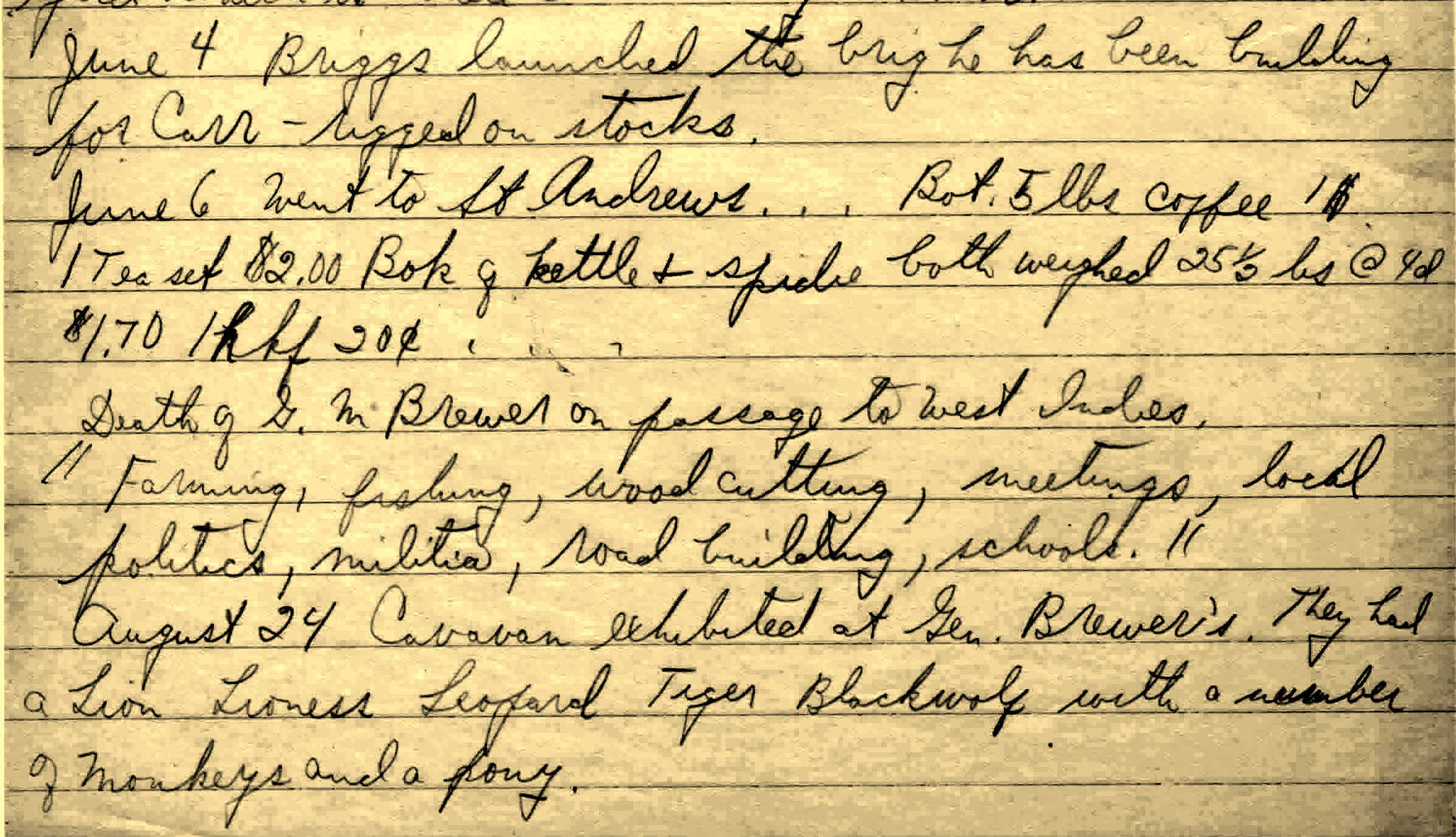 Frankly the Stone and Murray Circus looked more like a classic “Dog and Pony Show” plus “Comic Mules, of course than a true circus. It is possible the mission of the Stone and Murray Circus was not to entertain so much as to attract a large crowd of suckers and “marks”. A newspaper description of a Calais circus in the late 1880’s gives some idea of the dangers of the 19th century midway. From the Calais Advertiser:

To apply the term “fakirs” to the gang of hoodlums, thieves and pickpockets which accompanied the Cook and Whitby circus to Calais and which seems to make up the principal part of the show would be to insult the dishonorable fake fraternity. From the time their train arrived early Sunday morning until several of their number were safely housed within the gloomy walls of the Calais lockup Monday afternoon, they plied their numerous devices to cheat, they picked every pocket they encountered on their rounds and looked tempting to any degree, they openly snatched rolls of bills from the hands of those foolish enough to expose them, they did a thousand and one things to obtain money dishonestly; and the deadly weapons with which some of them were armed indicated that, under proper conditions, murder would not have been considered an out of the way proceedings.

The article went on to describe a series of strong arm robberies from patrons who showed too much of the ready when playing the various crooked games of chance and the enormous losses incurred by several prominent citizens in the nutshell and pea game, one of the oldest swindles on the midway. These prominent citizens or sore losers if you happen to side with the circus folks, took their grievances to Judge Rounds, then the City Magistrate, and had him swear out an arrest warrant against the operators of the “shell game” and owner of the circus. The article describes what happens next:

“Armed with a proper warrant they (The Calais Police) descended upon the shell operators. One concluded it would be better for them to move out. He did so rapidly with Officer McKay close on his heels. In flight he dropped a dirk knife and a loaded revolver. He was prepared to do business of any kind. After a desperate resistance he was lodged in jail. “

There followed other arrests including the owner of the circus who was charged with keeping a gambling house. Apparently the authorities were shocked to discover games of chance were being played at a circus in the City of Calais, a stain on the City’s reputation which Judge Rounds found could be removed only by the payment of $600 by the miscreants, funds which were returned to the prominent citizens who had made the complaint to their friend, Judge Rounds. It does pay to have friends in high places. Upon his release Cook, the owner, packed up and moved on to his next stop, Lincoln.

These small, regional “circuses” were replaced in the late 1800’s by Barnum’s Greatest Show Earth which actually lived up to its billing. In 1885 Barnum came to Calais and according to the Calais Advertiser the crowd was estimated at ten to thirteen thousand.

A last word on the hurdy gurdy man. Alex Markhoff who grew up in Europe during the Second World War had this say from personal experience:

The term “Hurdy Gurdy” man is a misnomer. The fellow is actually playing a street organ, not a hurdy gurdy but “hurdy gurdy man” was the name commonly used to describe these entertainers. The street organ took no talent to operate. In fact the monkey could have easily played the organ and the man carried the tin cup through the crowd. The Hurdy Gurdy, on the other hand, is a true musical instrument which takes a good deal of talent to play and produces a very haunting and unique sound. 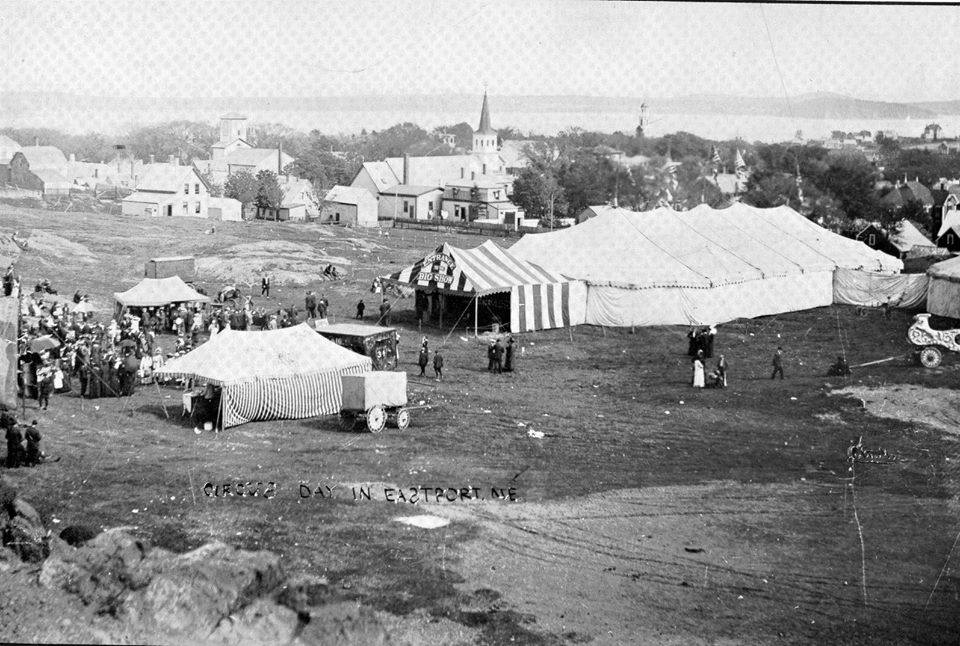 We’ll close with a photo of an early Eastport circus and you’ll see why where the term “Under the Big Top” may have originated.