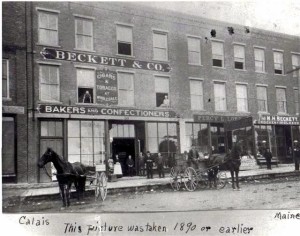 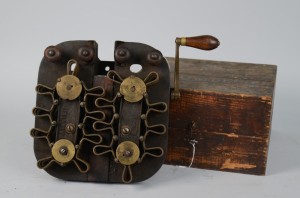 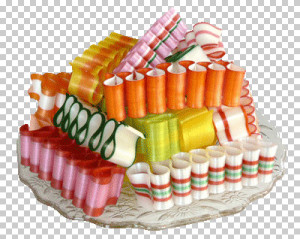 It seems an appropriate time of the year to recall the days when all candy was “local” and Calais was home to the famous candy maker Frank Beckett, Sr.  For well over one hundred years to the Beckett family the Christmas season was spent on the third floor of the Beckett building on Main Street in Calais making its famed hard candies for the Christmas trade. In some years Beckett’s produced nearly 8 tons of Christmas candy.  Frank Beckett was born in 1863 and even as a teenager was probably producing ribbon Christmas candy by turning the crank of the “candy crimper” pictured above. The making of ribbon candy was an especially delicate operation and required a good deal of skill but Frank was working in the family business by the age of 13 and had acquired the skills of a candy maker early in  life from his father, J.G. Beckett. 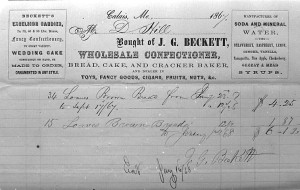 Frank’s father, J.G. Beckett came to Calais in 1851 from Scotland and opened a fruit, confectionery and candy business on Main Street.  The invoice above is dated 1864 when Beckett’s was situated in a wooden block in which South of the Border is now located. The wooden block burned to the ground in the Great Fire of 1870 and Beckett’s finally located in the building with which most of us are familiar.  It is unlikely there is a character in Calais history more interesting than J.G. Beckett . An inveterate risk taker, J.G. went broke more than once and fought with his sons when Frank and his brother blackballed him from the family business out as a result of his “erratic” behavior. After the Civil War J.G. bought few hundred defective Army muskets and sold them for $5.00 each to terrified folks in St, Stephen during the Fenian “invasion”. When he became tired of paying lawyers to battle his adversaries in court he went to Harvard and became a attorney. 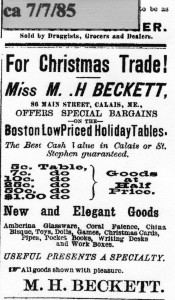 In the early photo of Beckett’s Store you may have noticed the store of M.H. Beckett to the far right. Maude H. Beckett was J.G. Beckett’s sister and for many years ran a “fancy goods” store just down the block from the Beckett store. It is likely she also spent time at Christmas either making candy or packing it for shipment as the operation was a family affair from which no one was excused. 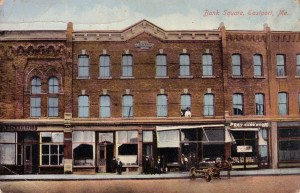 The candy business was in the blood of the Beckett family. Pictured above is the Alexander Beckett brick block in Eastport. Both this brick block and the Calais Beckett Store still grace their respective Main Streets. Alexander was J.G. Beckett’s brother. In the early 1860’s he came to Calais to work in the family business but in 1866 relocated to Eastport. He built this brick block and ran a very successful candy   business in Eastport until his death in 1904. The business was taken over by his son Harold Beckett who operated it for  many years. Connie Small, the author of the “A Lighthouse Keeper’s Wife”, a celebrated account of life on several lighthouses in Maine, St Croix Island was one, included a touching account of Harold and Alice Beckett’s kindness to her in 1943 when her husband was on submarine patrol in the Atlantic. At the time Connie was looking for lodgings in Eastport:

“I went to Beckett’s Candy Store downstreet. When I was about twelve my mother had a grocery and candy store and bought her sweets from Mr. Beckett. When the order came there was always a special little box for me. Now Mr. Beckett was retired from his wholesale and retail candy and bakery business, but he kept the candy store, as he said, “to keep me from the rocking chair. I hadn’t seen Mr. Beckett in twenty-five years, but when I asked if he remembered me, he answered, “I surely do, and your lovely mother.  I told him my problem. He said, “Well, Mrs. B. would never take strangers into her home, but you go up and tell her I sent you.

Nervously I rang the doorbell. When I told Mrs. Beckett who I was and that her husband had sent me, she asked me into a lovely room where we visited. She also remembered my mother and as we talked we found I went to her church, we both liked to make things, and we had other interests in common. When I excused myself to go, she said, “I’d like to show you my daisy room upstairs.” We went up the stairs to a large room with four large windows draped with ruffled organdy curtains embroidered with daisies. The beautiful brass bed was covered with a yellow daisy bedspread. Two bureaus, a couple of chairs, and a green plush carpet completed the furnishings.

After I’d admired the room we went downstairs and I had started to open the street door when she said, “I suppose you’ll be moving in by Thursday?  I guess I surprised her when I replied, “You mean, I can come stay in that beautiful, sunshine room?” From that moment we became friends. The Becketts remained dear friends until their deaths, long after I had moved to other places.

At Thanksgiving and Christmas I helped Mr. Beckett make candy at his store. He could tell by the smell when peanut brittle was just right. At Christmas I helped him make ribbon candy and candy canes and angel hair, like spun glass. He was rationed to a certain amount of sugar and knew that he couldn’t supply all who wanted the candy, so he ordered that candy be sold first to families with children, then to others if it lasted. I admired the Becketts for these values and felt lucky they were my friends.” 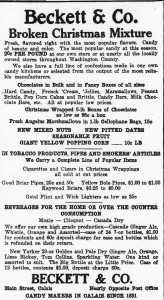 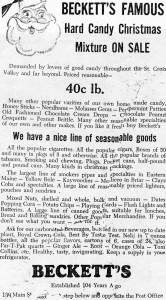 Frank Beckett’s reputation as candy maker continued to grow and Beckett’s remained famous for its Christmas candy into the 1950’s.Carol Allen recalls working for Frank Beckett in the early 1950’s:

“Christmas candy was really something..Old Frank, who was about ninety, and one lady made all the candy….they made candy canes, ribbon candy and the little colorful Xmas pieces…plus a molasses off white strip…delicious…and then the very thin ribbon candy….cream colored and pink…this was so fragile that it had to be placed in a large 60 pound grocery bag for less than a pound of candy….and then there was the basket made entirely of candy…brown ribbon candy for the base and handle…filled with the little Xmas candies…You had to guess the number of beans in a jar to win it…”

In 1957 the Associated Press did a story on Frank Beckett, then 95 years old:

1957, December 19- Associated Press News Release- “Down in Washington, County, Maine, in the middle of the business section of Calais, 95 years old Frank Beckett is finishing the last of his 15,000 pounds of Christmas candy.

The article makes it clear that even at 95 he was not yet ready to retire from the candy business:

“Frank Beckett may not feel he is as enterprising a man as his father, but his daily        routine makes one wonder. “I’m usually up at 6 a.m., eat a real good breakfast and by 7:30 I’ve got the candy shop going. Quite often at noon, I attend one of the many service clubs that I belong to, close the shop at 5:00P.M. and go home for a big supper and have a short rest.. Then I come back to the candy store and relieve the clerks so’s they can get some rest. According to how business is running, I close between 10:30 and 11:00 P.M.”” 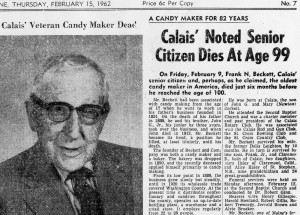 Frank Beckett came within 6 months of reaching the century mark.