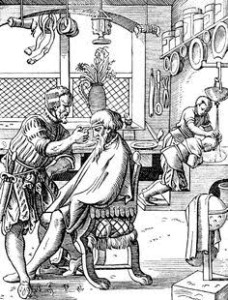 According to Wikipedia “The barber’s trade has a long history: razors have been found among relics of the Bronze Age (around 3500 BC) in Egypt. … In addition to haircutting, hairdressing, and shaving, barbers performed surgery, bloodletting and leeching, fire cupping, enemas, and the extraction of teeth; earning them the name “barber surgeons”. The ancient barbers in the drawing above seem to be engaged in basic barbering although Google Images contains many images of barbers plying their more sanguinary duties. By the time barbershops began to appear in the St Croix Valley in the 1870’s, barbers had turned those unpleasant  enemas and bloodletting over to doctors which, in those days, wasn’t much of an improvement for patients and upgraded the barbering profession to that of “Hair Dresser”. 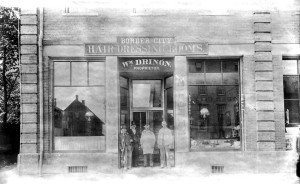 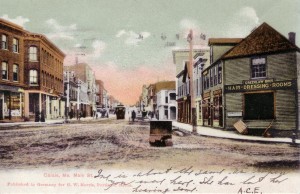 The above circa 1900 photos show the William Drinon and Greenlaw Brothers Hair Dressing rooms on Main Street in Calais. Drinon’s was on the far left of the Opera House building, later the J.D. Thomas brick block at the corner of Church and Main Streets. Greenlaw’s was at the intersection of Hog Alley and Main Street, now Triangle Park. The Greenlaw’s were Ira and Bert. and there is earlier reference to a Lucien Greenlaw as a hair dresser. It seems the trade was passed from generation to generation in the Greenlaw family. In the Calais business directories for those early years there were no listings for barbers, only ads and listings for for Hair Dressers. For instances the 1896 ad for Casey’s Hair Dressing, which we came to know as Casey’s Barbershop shop, states: 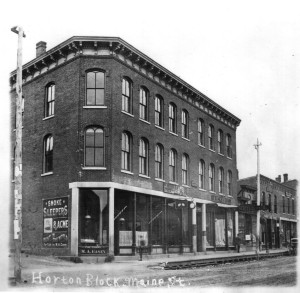 Mike Casey, which became Mike Casey and Sons, began business in the old Flatiron Block next to the St Croix Hotel about 1880 and around 1900 moved to the location across the street at the corner of Sawyer Avenue. Today Karen’s Pub is out of view just to the left across the alley but the cigar ad, which changed over the years, was repainted by Jake Chambers when he renovated the building. Many of us had our hair cut in this shop into the 1970’s.

“There were several barber shops working. The electric shaver hadn’t been invented, and many of the merchants and lawyers had a dally shave at the barber shop where they could catch up on the local news. A shave cost 35 cents, a haircut 75 cents or dollar. Mike Casey with his three sons had the biggest shop, Perley Brittney the Hotel Barber shop, and Walter Howe, with Wilbur King learning the trade. There was another on the second floor of the Flat Iron Building. I had credit with Walter Howe as Beckett & Co owned the building. I wanted my hair cut pompadour (cut and brushed straight up) but Walter wouldn’t do it because he said my father wouldn’t like it so I went to Casey’s’ and he lost a customer.” 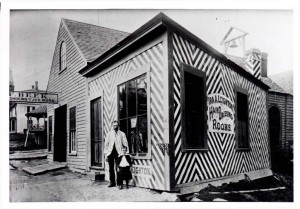 Ira Leighton was another well known hair dresser of the period who  plied his trade in his shop on Church Street just up from the corner of Main and below the fire hall. The fire bell can be seen above the roof of the shop and, as the City Building has not yet been built, this photo is before 1900. 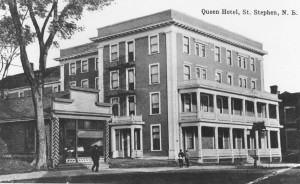 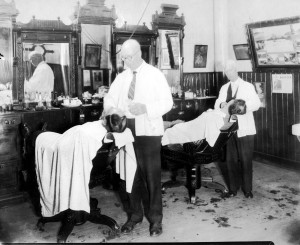 St.Stephen had as many barber as Calais at the turn of the century, the most well known being the Casey Brothers- Tom and Pat who barbered for 53 years in St. Stephen. The photo above shows a barber shop on Main Street next to the Queen Hotel but we can’t say it was Tom and Pat’s who are shown in the second photo. How many Caseys were barbers in Calais and St. Stephen is hard to calculate but it must have been close to double figures. There was also Jim Casey’s Barbershop near the Boston Shoe Store for many years. Jim was the father of Mary and Frances Casey and may have been a St Stephen Casey. 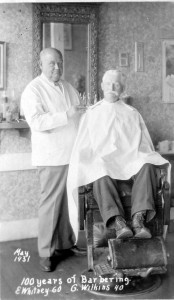 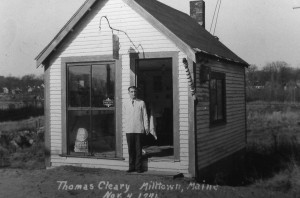 George Wilkins and Ed  Whitney handled the barbering in Milltown Maine for several decades, Ed Whitney was barbering as early as 1885.. The shop moved from time to time but was once at the corner of Chapel Street in a building which became the Post Office. Later a fellow named Tom Cleary has a small shop in Milltown. It was across Main Street from the bottom of King Street. When it rained heavily the water would run down King Street, across Main and into Cleary’s barbershop. He would open the front and back doors, letting the water run through. 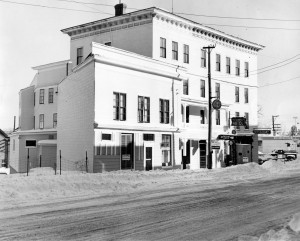 By 1935, when barbers were again called barbers in the local business directory, Calais had seven barbershops- Casey Brothers, George Coffran, Walter Gaskell, Frank Hillman, Walter Howe, William Kerr and Wilbur King- all with shops on Main Street. There were three in Milltown Maine- Manley Stanhope, Ed Whitney and George Wilkins. Even as late as 1957 there were 5- Harry Barlow, Casey’s, Wilbur King, Leary’s in Milltown and James Loney. Now barbers are rarer than hair on a billiard ball! (Sorry, I couldn’t resist). In more recent times Louis Morrison practiced the trade in the barbershop at the St. Croix Hotel, Casey’s still flourished and there was Harry Barlow on Winter Street. He was my barber as a kid and I was always fascinated watching Harry shave a customer. The chair would be reclined, Harry would lather the victims face and the straight razor, stropped for good luck a couple times on the leather strap hanging from the barber’s chair, would flash with incredible speed over the customer’s lip, chin and neck. I was sure the blood would soon begin spurting all over the shop. I couldn’t understand how the customer could be so calm as Harry always talked a blue streak the entire time and seem completely distracted from the delicate task at hand- waving his free hand for emphasis and expostulating to the other customers, as only Harry could, on all manner of subjects.His favorite expression was “Mister Man!” as in “And that’s the truth Mister Man!” Harry was very opinionated and as noted by Carol Allen, not great at customer relations.

“Dad used to go to Harry … and that was a trip… if someone said something he didn’t like, he wouldn’t cut their hair again.  I took my cousin to the Casey’s on Main St once, it cost twenty five cents to get his hair cut. I loved being there-the three of them were having a ball with their customers. I might have been ten, came home and told my father I wanted to be a barber that didn’t fly with him, no women barbers then.” 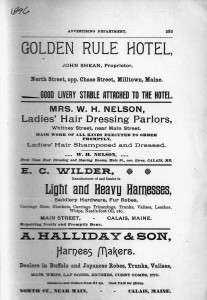 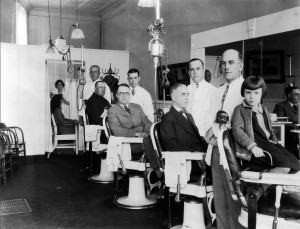 Where ladies had their hair done is somewhat of a mystery. The one early ad we found for Ladies Hairdressing, shown above, was for Mrs W. H. Nelson’s Hair Dressing Parlors on Whitney Street from 1896. However it appears from the Casey’s barbershop photo above that later a woman hair dresser worked out of a room in the back of Casey’s Barbershop and girls may have gotten their hair cut by the barber. We believe the barbers pictured above are  from the front: Jim Casey, Charlie Casey, Jack Casey, fourth unknown.

“In the house on South St where Elaine Carpenter lived or lives a woman had a beauty shop…there was this horrid machine called a COLD WAVE  in the corner and it was used occasionally. It had large curlers attached to the top of the round machine by cords…guess once the curlers were in place, the machine was turned on and there the lady would be completely attached to the darn thing… but the newer perms were probably a bit like today’s. I was in the fifth grade when I had my first perm, a lady on upper Calais Ave. I think it was two dollars… after the chemicals were put on, then she would curl the hair in pin curls… hair pins not bobbi pins, went under the dryer and when dry then she took them out, she had a magnet which she moved all around my head and voila. Then along came Toni… and the ads were WHICH TWIN HAD THE TONI…. That’s when women started doing it… All done in the home and the smell lingered for days, in the house and in the hair. I never knew why they were called permanents…they should have been called temporaries.”

Presently we have one barber in Calais and a beauty shop on every corner. The worm has turned. Harry Barlow would have a good deal to say about the present state of barbering and it wouldn’t be pleasant.