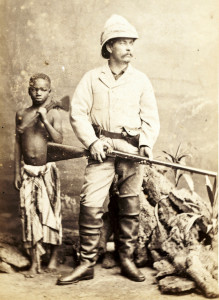 After finding “Livingstone” in deepest darkest Africa in 1872, Henry Stanley mounted several other expeditions into the interior of Africa including the “Emin Pasha Relief Expedition” of 1888. The expedition was followed closely by all the newspapers including the Calais Advertiser which reported excitedly on Stanley’s progress. Emin Pasha was the governor of Equatoria, a British possession in Southern Sudan who was ostensibly under threat by the natives. Stanley was recruited to lead an expedition to rescue the embattled governor. However Stanley was also in the employ of the King Leopold of Belgium whose methods for looting the Congo of its ivory surpassed in brutality even the excesses of the English. He wanted Stanley to claim new territories for Belgium during the expedition. The Advertiser of 10/17/1888 reported on “Stanley’s Hardest Battle” which is a very interesting and perhaps somewhat questionable account of the battle as much of the account is from the prospective of the chief of the tribe who claims never to have seen a white man before his tribe’s hostile encounter with Stanley. The circumstances under which this interview occurred and in what language are not at all clear.

The Chief, according to the account carried by courier to the coast, says

Stanley’s appearance “ was absolutely new to us and that upset all our notions of humanity as the sight of two white human beings, yes white as our pottery clay, who appeared to command the expedition. They seemed to have the same form as other men, but their hair, their eyes and their color was very strange to us”.  As to the battle with Stanley’s men the chief says “ But Oh! What fetish gave their weapons such wonderful power! Their bullets, made of heavy gray metal we had never seen before, reached us at enormous distances. Women and old men who following the combat from the shore were hit. Our stout shields were pierced as though they had been bananas.”

The reason for the battle is not certain but a clue is given in an article on the expedition in the Advertiser in November 1888 which says in part “ Forty were drowned in crossing a great river flowing from east to west; one white man had died. Stanley was obliged to fight some tribes that refused to supply him with provisions.” The expedition was one Stanley’s last.

(from Wikipedia) After immense hardships and great loss of life, Stanley met Emin in 1888, charted the Ruwenzori Range and Lake Edward, and emerged from the interior with Emin and his surviving followers at the end of 1890.  But this expedition tarnished Stanley’s name because of the conduct of the other Europeans — British gentlemen and army officers. Army Major Edmund Musgrave Barttelot was shot by a carrier after behaving with extreme cruelty. James Sligo Jameson, heir to Irish whiskey manufacturer Jameson’s, bought an 11-year-old girl and offered her to cannibals to document and sketch how she was cooked and eaten. Stanley found out only when Jameson had died of fever. 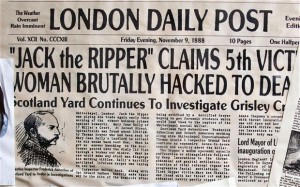 The papers of 1888 were also full of reports of Jack the Ripper who had terrorized London’s East End for a year.  The Calais Advertiser reported on the Ripper on November 14, 1888, although apparently getting the number of victims incorrect, as follows:        “ The rigid patrol which has been kept in White Chapel was thus somewhat relaxed and this gave the murderer an opportunity he was not slow to seize. At the time the fourth victim was found there was written on a wall near the body the words “Fifteen before I surrender”. The last woman makes the eighth victim”

In other world events the French finally admitted defeat in its effort to build a canal across the Isthmus of Panama,  the British East India Company was given the right to political control over India and Cecil Rhoades was given the British South African charter. The latter decisions were to  result in the death of millions when India was partitioned in 1947 and the rise of apartheid in South Africa. 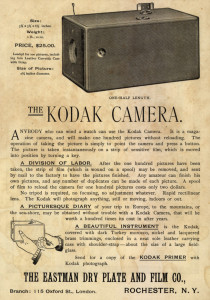 In the U.S. the first Kodak camera was patented and the National Geographic Society was formed. The Washington Monument opened, the pneumatic tire was patented as was the revolving door.The ball pen was invented and the world saw the debut of the beauty contest. 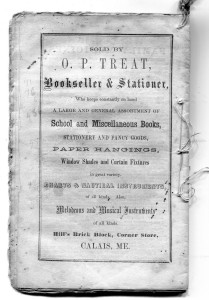 In Calais’ early days the center of town was from the corner of North Street to Church Street. To the far right of this photo is Treat’s Bookstore at the corner of North St. and Main. O.P. Treat was one of the most popular merchants in town and his bookstore was a local gathering place where affairs of the city and the State of the Union were hotly debated. As you can see from his ads he sold nearly everything except clothing and crockery. To the left in the photo is Lyford’s Clothing Store and beside Lyford’s is the St Croix Hotel, then the St Croix Exchange. The Boardman building in the center of the photo became the Cole Bridges Garage. In 1888 the Calais papers had advertisements for sail makers, engineers, ship chandlers, soap makers, iron foundries, livery stables, lumber dealers, tailors, dress makers- even a billiard parlor featuring famous “Bailey Tables” just across from the St Croix Exchange. There were five drug stores, a dozen large grocery stores, grist mills, harness makers and a store specializing in “oil tanned larrigans and mocassins”. 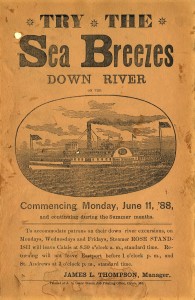 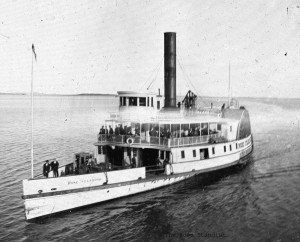 The Rose Standish, the last side wheeler on the river, made regular trips downriver to Eastport and St Andrews in 1888. The boat was also available for private excursions. 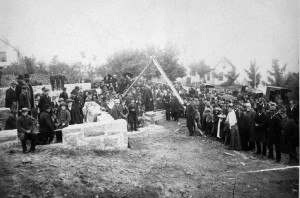 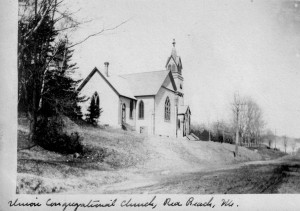 The Rose no doubt took many Calais Congregationalists to the laying of the cornerstone of the Red Beach Congregational Church in 1888. They may even heard the explosion described by Fred Keene in one of his Red Beach articles:

“It was about 1888 when predictions were made that a comet would pass over this section, and that we might expect showers of meteorites to hit the earth in all directions. This report, which frightened more timid folks, was made capital of by a couple of the town, boys. Tom Kaye and Jack Phelan. Tom had just graduated from school by that time and Jack was a popular young man who came from Calais to work in the granite mill. He was a fine looking chap and the girls had quite a crush on him. He was the first to introduce skiing, and while he took many chances and it was freely predicted that he would break his neck, nothing like that ever happened, as I know, for I served with him on the Jury this year and his neck and head were both all right, also his memory. (I am in­debted to him for freshening my memory on this and other points.)

It was no uncommon thing to hear a blast around Red Beach. The whole country was a stone quarry anyhow and nobody even jumped when a battery of dynamite sticks suddenly went off and sent a barrage of rocks abroad. Trading on this unconsciousness of noise, Tom and Jack went out in George Mingo’s pasture and after securing a quantity of powder and fuse, bur­ied it in a clay bank, several feet below the surface, lit the fuse and ran. The ensuing explosion and turnover of dirt was all that could be expected. That night or very soon there came a shower of the shooting stars. One seemed to alight back of Red Beach and in the morning it was announced that Uncle George had found the hole it had made in going into the ground. Great was the excitement. Some proposed to dig it up, but the owner of the land said no. His idea was to uncover the top of the meteor as soon as it cooled and put up a tent over it, charging ten cents to see a visitor from the sky.

This rather pleased Tom and Jack but they wisely said nothing. Some prying body, however, nipped short the prospect of easy money when in poking about in the clay he un­earthed the casing of a couple of yards of fuse. Suspicion at once naturally rested where it belonged, and there were wrathy words from Uncle George but nothing was done about it. The boys neither said they did or didn’t, but as they were at the bottom of most of the practi­cal jokes, it was always laid to them and at this late day Jack con­fesses that they were right.”