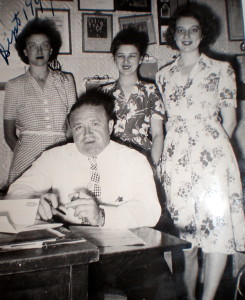 One of the rites of spring in Calais after the Second World War was the annual Unobskey Fashion show held on the stage of the State Theatre. Each spring Arthur Unobskey, shown above with his three indispensable assistants, would travel to New York City and return with a collection of the latest fashions. It was an expensive undertaking but Arthur Unobskey was a fearless promoter of his business interests and those of Calais in general. He believed there was a market for the latest fashions and a spring fashion show was a way to introduce local women to the styles of the day. 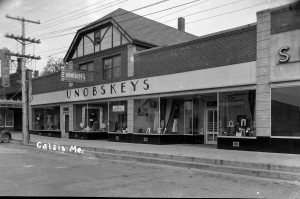 The objective, of course, was to get women through the doors of the family store next door to the State Theatre on Main Street and the movie theater was a perfect venue for a fashion or “style” show as was it was called at the time. Professional models were imported by Arthur to model the dresses which only added to the allure of the event. 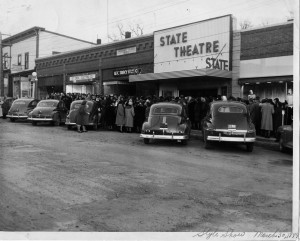 The  style show of March 30, 1949 was an especially big event. The crowd formed early and eventually spilled over into the street. According to Carol Allen who was a high school student at the time:

“At the end of the war when the hem lines dropped to mid calf, Unobskey’s sponsored a Paris fashion show there.  It was mobbed by every female in town.  Somehow I got shoved by the mob behind a door but was saved by my buddy, Margie…It was a great event.  SonnyUnobskey sang and the models from Paris wore beautiful clothes….After seeing the show those who had the money, bought new longer skirts and those of us who didn’t, well, we just let the hems down on our old, short skirts….those folded hem line marks never did come out…but we thought we were fashionable…glamor is in the eye of the beholder or in the pocket book of the beholder, not sure which it really is. 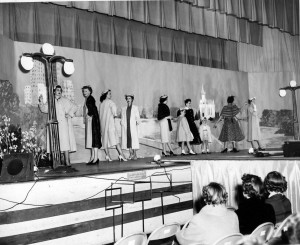 Inside the hemlines were, as Carol Allen noted, fashionably low. 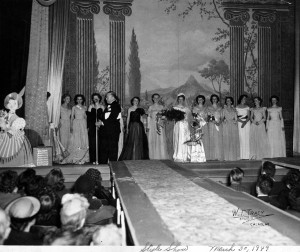 The shows always ended with the latest in wedding gowns although we can’t be sure the gowns displayed in this photo are all wedding gowns. We are a bit weak on the styles of 1949. However the men shown to the right, who somehow managed to get front row seats, might have known as they are perhaps post war fashionistas who lit their Chesterfields at intermission with genuine Unobskey fashion matches shown below. These matches were a brilliant idea in the days when nearly every adult smoked but Arthur was a brilliant promoter and he had a lot of dresses to sell. 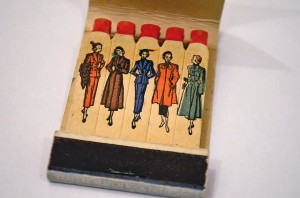 FASHION MATCHES! UNOBSKEY’S! Inside view of a period match book produced for the Unobskey’s stores in this region (Calais and Eastport, Maine).