This excerpt (used with permission) from Ken Ross’ book, Washington County Maine in the Civil War, 1861-66, details the life of Isabella Fogg. Ross recounts Fogg as among the most notable figures he had the pleasure of writing about for the project. To read more of the book, which features numerous photographs and a detailed appendix, purchase a copy online from CreateSpace or Amazon, or contact us to pick one up in person. All proceeds from sales are donated to the Society. 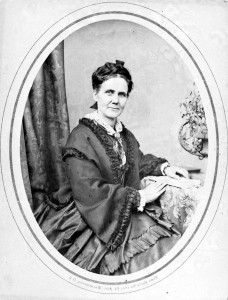 One of the most outstanding women volunteers, Isabella Morrison Fogg (1823-73) had been born in Scotch Ridge near St. Stephen, New Brunswick.  Before age 14 she married William Fogg and moved to his home town of Calais.  After he died she supported herself and her son Hugh by tailoring.  When Hugh joined Capt. Joel Haycock’s Co D 6th Maine in the spring of 1861, Isabella gathered supplies and in fall 1861 accompanied a Maine regiment to Maryland to help out in hospitals.  At Annapolis she volunteered for a Spotted Fever ward, one of the most risky assignments.  In spring 1862 Isabella visited the Washington office of the U.S. Sanitary Commission and asked to help the swelling numbers of wounded.  Throughout the month of May she tended the wounded and sick on the hospital ship USS Elm City on the York and James Rivers.  Impressed by her work, a military surgeon invited her to serve at the front.  From May 1862 to November 1864 she nursed at sites including Gaines’ Mill, Antietam, and Gettysburg.

In mid-1862 Isabella’s son arrived from the nearby Fair Oaks battlefield to visit her.  He told of the appalling conditions of the sick and wounded in his regiment.  At once she gathered a wagonload of supplies and headed for the front.  Witnessing the need, she determined that an organized relief system would be the most effective response.  She returned to Maine for rest, funds, and supplies, and campaigned for improved relief efforts.  In Portland she saw the mayor and met the Ladies’ Committee of the Free Street Baptist Church, which solicited supplies for the men but had no reliable means of delivery.  The Ladies’ Committee then established the Maine Camp Hospital Association in November 1862, its field operations to be led by Isabella Fogg and committee member Harriet Eaton under the jurisdiction of the Maine Agency in Washington.  In October 1862 the two women had accompanied supplies to Harper’s Ferry, a collecting point for the Antietam wounded, and distributed them.  Their work produced an outpouring of appreciation from the military.

Mrs. Fogg proved to be a tenacious, outspoken, and uncompromising advocate for the sick and wounded.  From Northern Virginia she reported to Col. Hathaway, the state agent for the Maine Camp Hospital Association, that

We went over to Loudon Valley to learn the condition of several hundreds who had been sent the day previous without any preparation.  We found them lying about on the ground, in all directions, many convalescent, but a great many very low.  At this time no surgeons, nurses, or cooks were on the ground…[At Berlin] the misery and suffering  beggars all description, the heart sickens at the sight.

Isabella did not hesitate to point the finger of blame at those who abused the downfallen.  In a February 1863 letter to Col. George Washington Dyer, aide to Maine Governor Coburn, she described Quartermaster Alden Litchfield of the 20th as a wicked, profane, unprincipled man…Poor, sick men, scarcely able to walk, were dragged from their little shelter tents, in a drenching rain, to stand guard over an old lame horse, because, forsooth, it was the private property of the surgeon…I could name very many more, such as driving out these helpless victims to bury one of their comrades, telling them with horrid oaths, that if they were not expeditious in hurrying him into the ground, he would cause a hole to be dug in which to inter them.

The quartermaster, said Isabella, always told the men that commander Col. Adelbert Ames ordered his actions, a claim she regarded as completely false.  But Litchfield kept his position until the end of the war.

While the soldiers loved her work, Isabella’s strong personality strained her relationship with Harriet Eaton.  They often disagreed.  After seven months at the front, Mrs. Eaton returned home.  The Maine Camp Hospital Association then ended its relationship with Mrs. Fogg without explanation.  They may have preferred the leadership of a more educated person than Isabella Fogg, a working-class woman, as Isabella suspected.  Her replacement by Mrs. R.S. Mayhew of Rockland suggested the possibility that Litchfield had retaliated.

Isabella resumed nursing under the Christian Commission, another relief organization, and assembled supplies in the Bangor area.  The state legislature appropriated a modest sum for her program.  Isabella nursed at hospitals in Fredericksburg, then returned north for more supplies and a visit to Calais.  Back at the front, she attended her son Hugh, by then in Co E Maine Veteran Volunteer Infantry, when he lost a leg at Cedar Creek in October 1864.

Isabella Fogg risked her life continually at the front, often caring for men bearing communicable diseases.  More than once she too had to be hospitalized.  During a bombardment, while others fled she stayed behind to tend a wounded soldier.  A shell flew in and killed the soldier but spared her.  In late 1864 superiors assigned her to the hospital ship USS Jacob Strader at Louisville, Kentucky.  As she crossed the deck to fetch some wine for a dying soldier, she fell through a hatch and injured her spine.  She spent two years in bed, and never recovered.  She became the first woman to receive a civil war pension and the only one to be pensioned for injuries suffered during the war.  Military leaders including Generals Chamberlain, Hooker, and Meade praised her lavishly; they had observed her work.  She died in Washington DC at age 49, nearly penniless.  Her son Hugh died of Tuberculosis at age 36 (Sudlow, 18-33, 92-100; McCaskill, 13-31, 41-47; “Isabella Fogg,” 2-6).

During her service, Surgeon Freeland S. Holmes of the 6th wrote to Isabella:

The friends of Maine soldiers can never realize how much they are indebted to you for such hazardous, arduous, and untiring watchfulness of the wants of our men; and not only we are made the recipients of your care, but I may add the wounded and sick of the whole army…the lives you have already been the means of saving may be counted by thousands (McCaskill, 35).