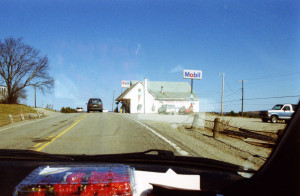 For folks from the St Croix Valley there is no road which has evokes the memories or has such a firm grip on the local psyche as the “Airline”.  Just a glance at the photo above which is fairly recent will, for many, trigger a twinge of nostalgia- the approach to Mace’s Store going east. How many times did we stop here for necessities? After all it was 69 miles from the store to Calais, 69 adventurous miles over that legendary wilderness road known as the Airline where anything could happen but, in reality, seldom did.  Parts of the road as we know it existed from the early 1800’s, a road ran from Calais to Wesley and Crawford and from Bangor out through Clifton but the stretch in the middle was indeed wilderness. In those early days the mail came the shore route, through Ellsworth and Machias. A group of local Calais businessmen decided it would be faster to come directly east from Bangor but It would only be financially workable if the group could get the $5000. U.S. mail contract.

The problem was convincing the authorities in Washington that it was feasible to drive a stage coach like the one above due west from Bangor. This from a newspaper article in 1908:

“But before making a request at Washington, it is necessary to show that such a line, through the dense forests which were then known only in part by the lumbermen, to demonstrate, was practical. Leading men were actively interested in procuring the favor and began to plan as to how to convince the government that their demand was not unreasonable. George W Spratt of 43 Essex St., then conducted a large livery stable Calais and was known throughout the eastern part of the state as a horseman and stage owner. Before the conference of the promoters was very far along, it was unanimously agreed that Mr. Spratt will be the man to go over the line for the first time. He was consulted with, and preparations were made for the first trip from Calais to Bangor by way of Crawford and Wesley. With a pair of horses and a covered carriage, Mr. Spratt and a companion started for the woods.From Calais to Wesley the roads were in fairly good condition, but after leaving the latter place all the journey was over narrow paths made by the lumbermen roadways that had never before been traveled by a spring-wagon. For a distance of over 50 miles there were but three cabins, the woods was abounding  in wolves and other wild animals and all kinds of game.

Despite the comparatively unexplored journey and the hard traveling, Mr. Spratt made Bangor and safety proving that the so-called airline was entirely practical. Soon after the claims were presented in Washington, bids for carrying the mails over of the new route were called for and Mr. Spratt received a contract which paid $5000 a year.” 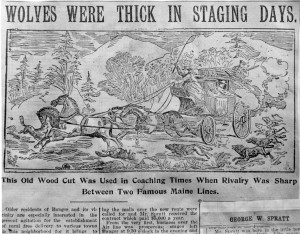 Naturally the owners of the shoreline route were not pleased by this development and tried to discourage passengers from taking the “Wolf Route” but this only gave the new route much free publicity and encourage adventuresome types to take the airline stage in the hopes of shooting wolves. 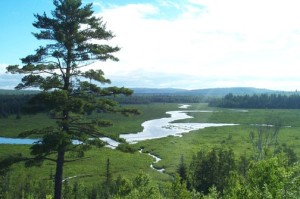 One interesting story and description of the airline involves Jefferson Davis, soon to President of the Confederacy and his wife who spent a summer on the Ailine in 1858 at what we know as the Union River and whalesback:

A professor A. Dallus Bache, great grandson of Benjamin Franklin, was, in 1858, the first head of the United States geodetic survey department. He was responsible for the setting up of the Calais Observatory. In the summer of 1858 he was with observers on Humpback Mountain, just off what is now route #9. Bache had been brought up in the South with Jefferson Davis. That summer Jefferson Davis was quite ill while serving as senator in Washington, DC. His doctor suggested that he get out of the city and visit a Northern climate. Bache invited Davis to join him atop Humpback Mountain with Davis’ wife and 2 children. This they proceeded to do taking a naval vessel that delivered them to Portland and Milbridge and thence by stage coach to Cherryfield.

The following is a quote from a book by the wife of Jefferson Davis, Varina Davis. “We drove nine miles over a most wonderful natural road, called by the country people “horseback”, elevated over sixty feet and sloping steeply down on each side to the valley which it intersected,  like a levee built by Titans. [We know this now as the “whaleback’.] Interspersed throughout the rich valley on either side, in lush green grass, were the most enormous bowlders of granite, which looked like Egyptian tombs. As there was no stone of the kind underlying the soil, Professor Bache thought they had been left there by some giant flood. The apex on which we drove was only about twenty-five feet wide. 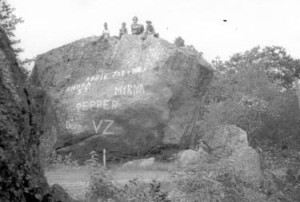 Certainly  many remember those “enormous bowlders” along the road on which names were painted and romances were memorialized only to be sometimes effaced in the time it takes to look up the word “infidelity” in the dictionary. The one above was named the “house” rock because it was the size of a house but there were several others. They haven’t disappeared of course but are now on old sections of the Airline which were bypassed when the road has been straightened over the years. 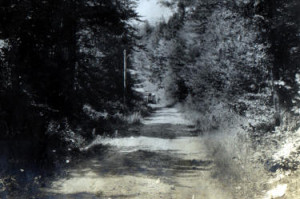 The Airline wasn’t completely paved until the 1960’s. Above we see it in Alexander in 1905, in pretty good condition for a road in those days. Today the Airline is straighter, wider but many would say it has lost much of its charm and excitement lacking the hairpin bends, curves and dips of old road. Mace’s relocated on the new road but it is snack bar and ice cream joint opened only a few months a year. It can’t compare to the Mace’s of past in much the same way the new road is a pale and poor substitute for the Wolf Route of yesterday.