Washington County has had its share of scams over the years: the Lubec “Gold from Seawater” swindle comes immediately to mind, as does the Burwash fraud of a century ago when vacation lots in Wesley were offered in the bug-infested back woods which were, according to the brochure, “Easily accessible by Road, Water and Steamship.” It’s very doubtful even the biblical great flood would have floated a steamship to Wesley. This area’s greatest and most successful scam, however, had to be the fictional new town and  lovely resort of Lakenwild, just 6 miles from Princeton.  According to Belmore’s Princeton history:
“One day in 1883 the good townspeople were electrified by the news that an enterprising outsider with much cash had been impressed with the beauty and commercial future of the Princeton environs and was about to build a big town on the De Lue Simpson property up on the shores of Big Lake contiguous to Governor’s Point. At first the news seemed much too good to be true, but shortly men actually began to build a road from the Grand Lake Stream highway over the Musquash marshes to the mainland at a point about where John Robinson, mentioned some pages back, had in early days built his modest cabin; a residence, splendid and spacious for these parts, actually began to take shape at a spot near where said Simpson lived for some years; and still more reassuring was the fact that the genial outsider responsible for all these marvels began to be much in evidence in Lon Rolfe’s store and the village post-office. In due time surveyors began to lay out the new development into numberless lots twenty- five by one hundred feet in dimension, and to plot streets and boulevards bearing names familiar and names exotic but all of them lovely beyond words. Then appeared documentary proof of all these great doings in the form of literature gaudy and grandiose.” 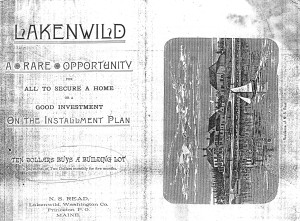 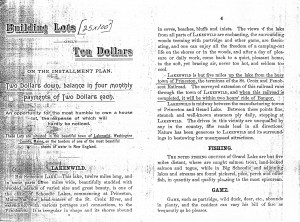 Accompanying the brochure was a an attractive map of which we sadly have no copy but it described an extensive settlement centered on Mr. Read’s home, shown here. 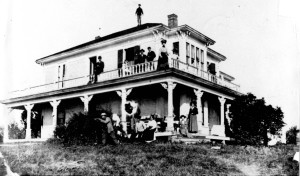 The Read Place, site of Lakenwild

Again from Belmore’s history:
“Now let us take a glance at the map which accompanied the folder. In addition to the lots and streets and boulevards, there was a public park. A large building is shown where Mr. Read’s residence actually was, the town hall, the Schoodic House, and two wharves. At one of these wharves a large steamer, with two decks and side-wheels, is docked; and anchored in the harbor nearby are two single-masted ships and one three-masted one. No town hall or hotel was ever built there; only one small wharf was there; and of course there were no double-decked steamers or double-masted schooners this side of Calais. Mr. Read most certainly was “genial,” and genial host enough to be described in the plural without exaggeration. The writer remembers Mr. Read very well. He was short and fat with round pink cheeks and well-groomed hair. He was dressy with gay neckties and diamonds. His flushed countenance was always wreathed in smiles superlatively benevolent and convincing. His smiles were not the kind that come and go; they rested eternally like a painted halo on those rosy cheeks. Mr. Read was sociable; he liked people and wished them to be happy. His employees were well paid and devoted to him. In his said folder he declared, “I cannot afford to have a lot owner dissatisfied in any way.”
Mr. Read had no reason to worry about dissatisfied lot owners, for though he did not actually make any of the improvements promised in the brochure, or ever intend to, he wisely left town well before the lot owners arrived. This left it to the locals to advise the owners that perhaps it was better to sent their piles of steamer trucks over to the Princeton House rather than attempt to transport them along the rough road to the non existent town of Lakenwild. In the end the scam did the Town of Princeton no harm and greatly increased business activity for a time especially at the  Princeton Post Office. 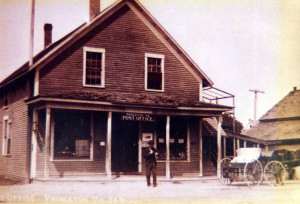 “So heavy was the mail during the Lakenwild boom that the Princeton post-office was boosted from fourth class to third class, only to tumble back when Mr. Read’s town was sold out. Mr. Read is said to have landed in St. Stephen, New Brunswick from somewhere in Pennsylvania; there he remained a short time, shorter some said than he had planned; and from there he hied himself to the obscure shores of Big Lake. After all the lots were sold out, his work was done, and he withdrew to Calais, there to enjoy the fruits of his genius. Projector Read had ability.”

Those who did come to enjoy their Maine vacation property were, of course, disappointed that the reality of Lakenwild did not exactly match Read’s original vision– if, indeed, his vision went any further than producing a fancy map and brochure and checking with the Princeton Post Office on a regular basis. However, the buyers did own a piece of Maine which offered health and happiness to the lucky owners of Lakenwild lots: 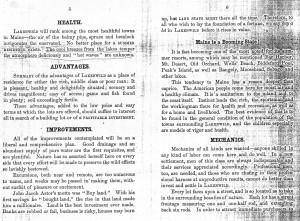 The lots were a good investment and easily accessible: 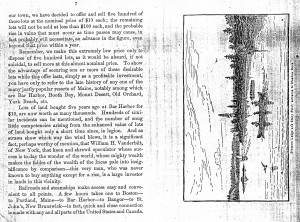 and were ideal for artists and the “club” set: 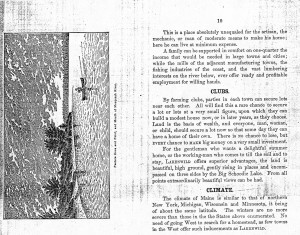 For those interested, here is Bruce Belmore’s History of Lakenwild, from his Early History of Princeton, Maine.