In terms of important, world shattering events, 1930 was a pretty dull
year, although two events in 1930 did have significant future
repercussions. The first was Gandhi’s Salt March to the Sea in India,
a protest of the British prohibition against local salt production
which interfered with the British salt monopoly and tax collection
efforts. Large numbers of Indians joined Gandhi’s movement as a result
of the protest and he firmly established himself as the leader of
opposition to British rule. The second was Stalin’s collectivization
of farms in the Soviet Union. Mass starvation and tens of millions of
deaths resulted from this disastrous policy over the next several
years. In the U.S. Hoover announced to a skeptical nation that the
Depression would be over in 90 days and “Prosperity was just around
the corner.” Needless to say this pledge came back to haunt him in the
1932 election against Franklin Roosevelt.

In lighter news 1930 saw the debut of the Blondie and Mickey Mouse
comic strips, Bonnie Parker met Clyde Barrow at a party and an unknown
Marlene Dietrich had her first role in “Blue Angel”. On the food front
there were two significant developments- the Twinkie hit the shelves
and Clarence Birdseye discovered that while normally frozen food was
unpalatable when thawed, flash frozen food kept its flavor, color and
texture after thawing thereby creating a revolution in the food
industry. The since demoted planet Pluto was discovered and the
Yankees hit 14 home runs in one game, rightfully earning the nickname
“Bronx Bombers”.

In the St Croix Valley, 1930 saw fierce completion for the loyalty of
the traveling public. Railroads were beginning to suffer from
improving roads and cheaper more dependable cars. The local Ford
dealer would sell you a Ford Roadster for only $435, a Town Sedan- the
top of Ford’s line- was $660. Calais Motors specialized in used cars,
a 1927 Nash was a mere $325 or best offer although a Nash sedan of the
same year was $650. Many still traveled by water in 1930. The newly
built steamship Grand Manan II was put in service between St John, St
Stephen and Grand Manan and for $9.00 the Eastern Steamship Company
would transport you from Eastport to Boston on the Steamship Calvin
Austin, leaving Eastport at 1:00 P.M. and arriving in Boston 10 A.M.
the next morning.

Increased vehicle traffic led to calls for a new bridge to be built at
Ferry Point in Calais. Through September of 1930 375,000 vehicles and
1,125,000 people had crossed the bridge. The roads, however, were
still very poor locally. For example the road between Woodland and
Princeton was not paved and when the highway department suggested not
paving but another coat of gravel a furor arouse. From the Calais Advertiser:

“Objection to the State Highway Commission’s plans to surface with
gravel the road between Calais and Princeton has been raised in
Washington County and been made the subject of a letter to State-wide
organizations from the St. Croix Paper Company.

The letter, signed by W. J. Brennan, chief chemist, declares that year
after year this stretch of road has been casually sprinkled with a few
inches of gravel, which shortly thereafter lies thicker in the ditches
and on the bordering trees than it does on the highway. In the spring,
the complaint asserts, cars sink to their headlights in mud, must be
pushed even down hill and toss so violently at the most moderate
speeds that children must be strapped to their seats to keep them from
being flung out. Cement roads, according to the letter, are the only
solution to the perennial problem. “

And Ned Lamb describes an attempted excursion to Bangor:

Tuesday. December 2 1930—some members of the Methodist Men’s Club had
decided to attend a convention is Bangor and return the same night.
The plan was to leave very early in the morning. The storm discouraged
early rising, but they were good sports and at 9 o’clock they started,
taking the northern route through Lincoln so as to have sledding and
save 25 miles. All went well until well beyond Topsfield, when one
half of the car got into the ditch. They rolled along a ways until
they came to a culvert and then the car very gently and quietly laid
over on its side. Jimmie crawled out ‘through the door and helped the
other two out. They righted the car and found not even a pane of glass
broken. They started again, but their enthusiasm for the convention
had been cooled and so they decided that home was best, so back they
came. The reports of the convention were very interesting in the
papers.

In health news the Calais school nurse was very worried about the
physical condition of her students- many were seriously underweight
especially in Milltown. 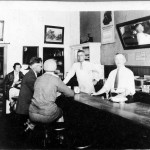 The interior of a local restaurant in 1930. We know it’s 1930 because the Grearson’s calendar on the wall says 1930. We think this may be Ryan’s Lunch at the corner of Church and Main Street. 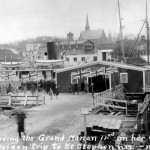 The newly built steamer Grand Manan at the St Stephen pier on its maiden voyage in 1930. Built in St John it was 152 feet long with a 32 foot beam and a speed of 14 miles per hour. The crew was normally 14. Across the river in the photo is Calais, the church steeple dead center is the old Congregational Church. To the far left is the Red Church, later the Methodist which was recently demolished. 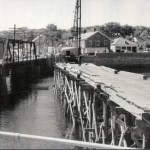 Although locals began lobbying for a new bridge in 1930, it didn’t actually happen for 25 years. This photo shows the new Ferry Point Bridge under construction in 1956- note the new bridge is slightly upriver from the old steel bridge. The U.S. Customs is rear center. 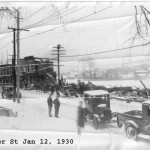 The St. Stephen fire of 1930; Calais is visible in the background. 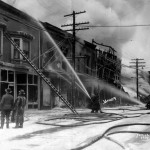 Firefighters in St. Stephen try to save the downtown buildings in 1930. 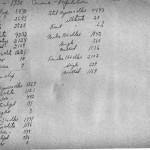 Calais census figures for 1930- it is interesting to note that less than half of population in 1930 had native born parents. Calais was still a largely immigrant community. 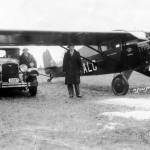 A rare General Airplane Corporation airplane, the Aristocrat, as seen in St Stephen in 1930. 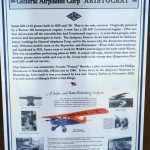 More information on the Aristocrat airplane.