Young Alice Sinclair was among the first piano players in Calais to provide a musical accompaniment to the silent films of the early 20th century. She began her work just after the first World War. Sinclair eventually moved to Meddybemps and lived the last years of her life in Calais at the Holmestead when it was a senior citizen home. During the silent movie era the piano player was often as big a draw as the film itself. Many films came with suggested songs to be played during particular scenes but others piano players like Alice relied on inspiration rather than instruction.

This article from 1991 (published in the Bangor Daily News) by Diane Graettinger tells more of the story:

When 84-year-old Alice Sinclair stretches her fingers and pulls up the
stool to tickle the ivories, she recalls the time 70 years ago when
she was 14 years old and earned $1.50 a night playing piano pieces to
accompany silent films that flickered on the screen. Sinclair began
her career as a silent-film piano player during her first year in high
school. Raised in East Machias, it was there that she began her piano
playing career.

“They just got me because I would do it cheaper. I played the piano
for $1.50 a night, and I did it for the four years of high school,”
she said. Sinclair said she enjoyed the free movies as she played
along with the action.”I remember that sometimes I would get so
involved in the movie myself that I was afraid I wasn’t playing the
right thing,” she said.

The octogenarian said that, although she took a few piano lessons as a
youngster in East Machias, she soon discovered she usually could play
a piece of music by looking at the sheet music. “My music teacher was
very strict, and she didn’t mind whacking me with a pencil or
anything, you know. I went with this bad lesson one day, and I never
told my mother anything about it. I was sent home and I never went
back. I went to Machias and I bought a piece called ‘Smiles That Make
You Happy,’ that was the first piece I bought… and just entertained
myself after that,” she said. She continued to purchase sheet music
and continued to play.

The silent movies were generally a mixture of action and romance, and
Sinclair said she would make a list on a piece of cardboard of several
song titles she intended to play during the movie. She said the list
helped her remember what music to play as the movie flickered in the
darkened theater. She said that when there was a lot of action, such
as men riding horses, she’d play a “jiggy tune.” When the action
turned to romance, she would play a love song.
Asked it if was difficult to make the transition from an action scene
to a love scene, Sinclair said, “I don’t know, something would just
come into my mind, just the right kind of a jig or whatever and I
would play along with the action,” she said.

Sinclair said involvement with music was common to her family. She
said her mother began to play the pipe organ when she was 14 years
old, and played the pipe organ in a church in East Machias. “I
remember how my brother and his friend would pump the organ for her,
and he would let it out on purpose to irritate her,” he said.

Although Sinclair watched many movies as a youngster, she said she
found that today she watched few movies. “A lot of TV is miserable,
isn’t it?” she asked.
After she graduated from high school, the young Sinclair gave up her
career as a silent movie piano player to get married. She and her
husband moved to Meddybemps where she worked with him on their farm. I
was too busy on a farm. Tramp hay and do every old thing. It was quite
a change from playing for movies,” she said with a laugh.

Since she had inherited a love of music from her mother, Sinclair said
she had hoped her own five children would show a similar interest. She
said she taught piano to her daughters, but her sons were not
interested in music. Sinclair now lives in Calais at the Holmestead
House on Main Street in Calais, a retirement home for senior citizens.
In 1954, Calais resident Josephine Moore left the Holmestead House for
use in perpetuity as a home for senior citizens.
The large living room at the Holmestead contains a piano and it is
there that Sinclair entertains her housemates with lively renditions
of their favorite tunes. 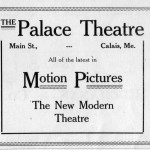 An ad from the Palace Theater, Calais, Maine, dating to 1914. 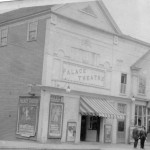 The Palace Theater on Main Street in Calais. 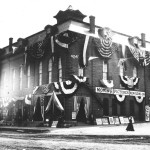 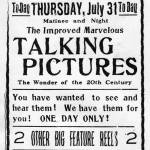 This flyer from 1913 advertised the improved talking movies featured at the Opera House in Calais. 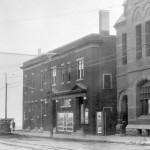 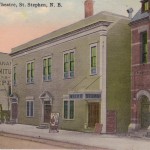 The Bijou theater in St. Stephen, with the Queen Hotel directly across. 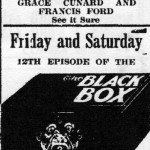 A flyer from the Bijou Theater dating to 1915.