Incorporated as a town in 1825, Baring’s history is inextricably linked to one William Vance, who, it can be safely said, was an uncommon reprobate, rogue and rascal  at time when there was considerable competition among the residents of the St. Croix Valley for the title of biggest scoundrel. As to the Town of Baring (originally called Vance Mills), Cliff Chase, Baring’s foremost
historian, wrote the following in 1925:

“The history of Baring really began in 1793 when the General Court of
Massachusetts sold townships No. 5 and No. 6 to William Bingham of
Philadel¬phia. Bingham went to England to look after the titles of the
lands which had been granted by George III. While there he fell ill
and died. His daughter, who had accompanied him, married Alexander
Baring, son of the famous London banker, and they returned to America
to look after her father’s property. Tradition holds that they came to
Baring and erected what was known as “The Big House on the Hill”. It
is to be regretted that this, the first house built in Baring, was
destroyed by fire in 1922. While living there he received word that he
had fallen heir to a title in England and left hurriedly for St. John
where he took passage on a sailing vessel. Before leaving, however, he
leased his land holdings in Baring to William Vance, and Vance later
bought a large part of the leased territory.”

Vance was a man of extremely flexible loyalties- when just 16 he enlisted in the Continental Army to fight the British as a substitute for his brother who had been wounded at Bunker Hill. He fought at
Bemis Heights and Saratoga but after the war moved to New Brunswick, receiving a grant on St David’s Ridge near St Stephen from the British government. He later moved to Upper Mills opposite Baring and, as noted above, leased and subsequently bought the land from Lord Baring which was then called “Vance’s Mill” and is now the town of Baring. He practiced law in St Andrews, was a Justice of the Peace in New Brunswick and otherwise a loyal British subject until his more profitable business interests in the States persuaded him to switch sides again and move to Baring. During the War of 1812 he mounted a cannon on his Baring property and threatened to bombard his former countrymen and neighbors should they take any military action against his interests. On a personal level he was married 5 times at least once without observing the niceties of divorcing his prior wife.

James S Pike, a contemporary who knew him well, writes as follows about the notorious “Old Vance”. He was called “Old Vance” by Pike at the time to distinguish himself from his son William Vance who, by the way, was hanged as a pirate (which should perhaps have been noted in the history of Calais’s pirate activity).

He was a very striking character. He was wholly without education. I
never heard of his reading. His writing was a near scrawl. Yet he
played the part of a lawyer before the Courts of those early days and
was constantly a speaking member of the State Legislature.

His vivacity was great and his power of repartee so well known that
everybody dreaded him as an antagonist. He was the representative of
the rude democracy of the country, with whom he was hail fellow, well
met and always had a joke or a story or a sarcasm for them.

The slender conservatism of the outskirts of civilization in which he
lived was always opposed to him but could never make any headway in
keeping him out of the legislature or in any way suppressing him. I
can see him now, old and gray, flitting lively about, his false teeth
shaking as if ready to drop out of his mouth, and the old man in
constant mumble between a laugh and a joke, nervous, belligerent and
sparkling with rough and ready wit or impudence.
His reputation for truth and integrity was largely below par and his
habits with women were notorious for their looseness. He was married
several times and when I was a lad he had been long living with a
woman to whom he was not married and by whom he had several children
and whom he always styled “Lottie Dear.”

At this time he had a wife from whom be had been divorced, living. His
older children subsequently got him to marry “Lottie Dear” but
afterwards detecting in her some (infidelity?) he got a divorce and
married another woman in the town of Readfield whither he had gone to
live in his old age and very soon was involved in a suit with her,
also for a divorce.

It was made a very amusing trial and his counsel was Paley Sprague, a
very eminent lawyer, afterwards and now (1863) Judge of the Circuit
Court of the United States in Boston. When I saw Lord Palmaston last
month it struck me that in many respects he and “Old Vance” were by
nature much alike. The “ha ha” and “Gad dear” of Vance, and the “ho
ho” of Palmaston, each following some humorous suggestion, were quite
similar.

As a lawyer Old Vance made ludicrous mistakes and stumbled along easy
and anyhow, but his audacity and native parts always took him through.
He was once attacking a law and styled it an “Ispo facto” instead of
at ex post facto law at which judge and lawyer burst out in a laugh.
“Gad dear” I may not be quite right for am not much of a lawyer in my
Latin but I think it is quite good enough for the place.

Old Vance was a holder of a large property in the wild lands and mill
at Baring. He was an agent for the Bingham lands on the St. Croix
under John Black of Ellsworth, so long their general agent, but very
loose agent. The brothers Richard, Henry and Francis came to file
proof of agents about the year 1828 or 7, and bought him out and he
soon after removed to Readfield. He had, at the time he sold, a great
three story house on the long narrow ridge at Baring facing the
English side of the river. During the war of 1812 he planted a cannon
on the end of the ridge which then abutted on the river, and
christened it “Mount Defiance.” This was after he had lived in the
Province and taken the oath of allegiance in order that he might
practice law in the English courts. But to a man on the make, taking
an oath of allegiance and to such circumstances was no more than
taking a custom house oath by a smuggler.
I should have reminded that when “Old Vance” was in the Legislature he
came into collision with “John Holmes,” one of the ablest men in the
State and who held various offices in the gift of the people, among
them that of United States Senator. It was education and talents on
one side against man’s native ability on the other both being noted
blackguards. It was conceded that “Old Vance” lost nothing by the
encounter.

(Note by the Amanuensis)

We hope that Cliff Chase will read this because it is about a
predecessor in the Legislature. Mr. Pike does not seem to think so
very much of William Vance. Yet this gives a picture of that little
settlement three miles up the river some time before the Lord came to
Baring. We mean Alexander, Lord Baring, the second son of Lord Baring
the head of the great Baring Brothers Banking Co. of England, and who
later became the head of the Company himself, and as Lord Ashburton
worked with Daniel Webster to settle the northeastern boundary of
Maine. He lived in Baring a while and left his name to two towns. He
was the husband of Miss Bingham of Philadelphia, heir to the Bingham
purchase of wild land in Maine. There is a Baring street in
Philadelphia.

After all William Vance was quite a man along the river and it was
quite a piece of work to start saw mills so far up the river with no
roads down from there and no bridge across Maguerrowoc stream. He left
his name for a town.
When civilization was young around here, the Congregationalist church
of Massachusetts sent a Missionary down into this region who made his
headquarters at Eastport and traveled all up and down the small
settlements holding meetings, visiting schools, selling or giving away
Bibles and school books. He tells about going up to “Number 6” and how
Mr. Vance let him have a barn to hold his meeting in, and how Mr.
Vance spread the word of the meeting around all the territory. Two
women sent word to Mr. Vance that if he would send them some shoes
that they would attend the meeting. We expect that they got them all
right.

For more information on William Vance, have a look at historian Tom Moffatt’s detailed account of his life, viewable here.

The following are photos from Baring’s Centennial Parade in 1925, which provides an excellent glimpse at pioneer life in rural Eastern Maine. 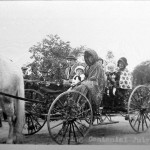 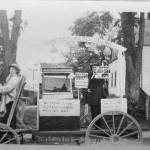 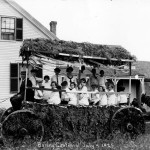 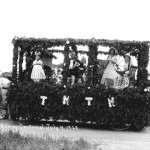 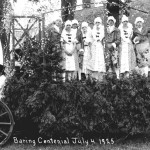 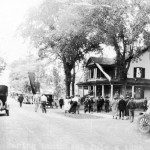