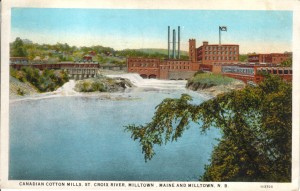 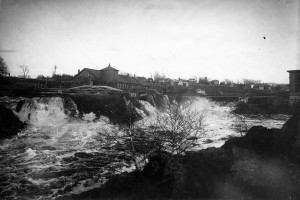 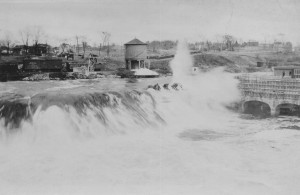 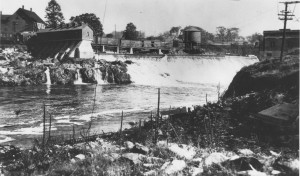 Salmon Falls in Milltown is one of the most historic geographical sites in the St Croix Valley. The Falls are located just down the hill from Knight’ s Corner and are easily accessible by the road which until the 70’s went to the Beckett warehouse and was most recently a redemption center.  The photos above were taken from the Canadian side and show the Falls with Knight’s corner on the US side in the background. In the foreground is the Maine Central railroad terminal and warehouses. The first shows the Cotton Mill which dominated the view across the river from Knight’s Corner for over 80 years.

The Falls are a sacred place to the Passamaquoddies and were a principal summer encampment for thousands of years before the coming of the white man. In more recent times the tremendous water power generated by the Falls was the sole reason for the construction of the Cotton Mill in Milltown NB, at one time the largest in the world.

In Glimpses of the Past published in the late 1800’s by the St Croix Courier it is said  the area around Salmon Falls on the Canadian side was originally designated as an Indian Reserve:

“On this Indian reserve, extending from McDougall’s lot at Stillwater to Brown’s lot below the Salmon Falls, lie nearly all the principal streets of the town of Milltown.  The place was one of much importance to the Passamaquoddies, not only on account of the ‘dipping fishery,’ but also because it contained one of their tribal burying grounds.  It seems to have been to them a sort of holy ground long before the white men came; for there is a tradition that here, on some spot near the Salmon Falls, was the fire from which the Schoodic took its name, (literally, ‘where it burns,’ or, ‘where it is burnt.’)  This fire, probably connected with some of the mystic ceremonies of the tribe, is said to have been kept burning throughout the fishing season.  The wonder-working fires of the cotton mill furnaces may now, perhaps, be burning upon the very spot on which the aborigines made their votive offerings to the spirit of the stream, or invoked the mighty Glooscap’s aid.

As to the “dippery” we cannot do better in describing the importance of Salmon Falls to the tribe than Ned Lamb in his article “ Let’s Go Fishing With the Etechemins” which can be found on our website http://stcroixhistorical.com/?p=1208 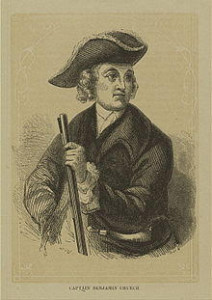 While Salmon Falls was generally a place of peace and plenty for the tribe there were times when the white man disrupted their summer encampment, notably in 1704. This was a period of intense conflict between the English and the natives and their French allies in New England.The Deerfield Massacre had occurred in February of 1704.  According to Wikipedia:

“The 1704 Raid on Deerfield (or the Deerfield Massacre) occurred during Queen Anne’s War on February 29 when French and Native American forces under the command of Jean-Baptiste Hertel de Rouville attacked the English frontier settlement atDeerfield, Massachusetts, just before dawn, burning part of the town, killing 47 villagers, and taking 112 settlers captive to Canada, of whom 60 were later redeemed.”

Of course the Passamaquoddies were not involved in any way in the violence but this did not prevent the English from sending Colonel Church, a truly despicable and villainous character, on a “punitive expedition” to the St Croix Valley with orders to kill or capture any Frenchmen or native he could lay hands on. He was paid $20 for each prisoner or scalp he took back to Massachusetts. While raiding the mouth of bay at St. Andrews and Eastport and killing and capturing some Frenchmen and Indians, he learned of the Salmon Falls encampment and the presence of many Indians and the cabin of a Frenchman named Sharkee and his wife nearby.

Church wrote of the encounter in his record of the expedition. He refers to himself in the third person-note he has “put on a good deal of flesh” since he was a Captain in the above photo and had some problems leading his troops upriver after abandoning his boat and taking to the shore near what is now the Ferry Point bridge to St. Stephen:

‘This Night’s Service being over immediately Col. Church leaves a sufficient guard with Gourdan, and the other Prisoners, mov’d in some Whale-boats with the rest, and as they were going spy’d a small thing upon the Water, at a great distance, which proved to be a birch Canoo, with two Indians in her; the Colonel presently ordered the lightest boat he had to make the best of her way and cut them off from Shore; but the Indians perceiving their design run their Canoo ashore & fled.  Col. Church fearing they would run directly to Sharkee made all the expedition imaginable; but it being ebb and the water low, was obliged to land & make the best of their way thro’ the woods, hoping to intercept the Indians, and get to Sharkee’s house before them; which was two Miles from where our Forces landed.  The Colonel being Ancient & Unwieldy, desired Serjeant Edee to run with him, and coming to several Trees fallen, which he could not creep under or readily get over, would lay his breast against the Tree, the said Edee, turning him over, generally had Cat luck, falling on his feet, by which means he kept in the Front; and coming near to Sharkee’s house  discovered some French & Indians making a Wair in the River, and presently discovered the two Indians aforementioned, who call’d to them at work in the River; told them there was an army of English and Indians just by; who immediately left their work and ran, endeavoring to get to Sharkee’s house; who hearing the noise, took his Lady & Child, and ran into the woods.  Our Men running briskly fired & killed one of the Indians, and took the rest Prisoners.  Then going to Sharkee’s house found a Woman and Child, to whom they gave good quarter; and finding that Madame Sharkee had left her Silk Clothes and fine linen behind her, our Forces was desirous to have pursued and taken her; But Col. Church forbid them, saying he would have her run and suffer, that she might be made sensible, what hardships our poor People had suffered by them, &c.  Then proceeded to examine the Prisoners newly taken, who gave him the same account he had before; of the Indians being up at the Falls, &c.  It being just Night prevented our attacking of them that Night.  But next morning early they mov’d up to the Falls (which was about a mile higher.)  But doubtless the Enemy had some Intelligence by the two aforesaid Indians, before our Forces came, so that they all got on the other side of the River and left some of their goods by the Waterside, to decoy our Men, that so they might fire upon them; which indeed they affected.  But through the good Providence of God never a man of ours was kill’d and but one slightly wounded.  After a short dispute Col. Church ordered that every Man might take what he pleased of the Fish which lay bundled up, and to burn the rest, which was a great quantity.  The Enemy seeing what our Forces were about; and that their stock of Fish was destroyed and the season being over for getting any more, set up a hedious Cry, and so ran all away into the woods; who being all on the other side of the River, ours could not follow them.  Having done, our Forces March’d down to their Boats at Sharkee’s and took their Prisoners, Bever, and other plunder which they had got, and put it into their Boats, and went down to Gourdans house, where they had left Lieut. Col. Gorham & Maj. Hilton, with part of the Forces to guard the Prisoners; (and kept a good lookout for more of the Enemy) who upon the Colonels return, gave him an account that they had made no discovery of the Enemy since he left them, &c.  Just then Her Majesty’s Ships and Transports arriving, . . .’ 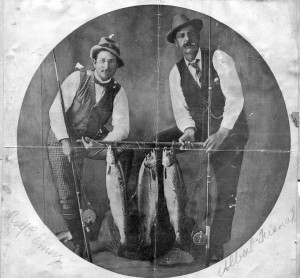 In more recent history Salmon Falls truly lived up its name a place where the salmon of great size and quantity could be taken. Above Albert French and Rolf Emery proudly display a day’s catch at the Falls in the late 1880’s.

THE SALMON POOL AT CALAIS, MAINE 1889- from Advertiser

“A short paragraph regarding the now well known Union Salmon Pool, within a half a mile of Calais Railroad Station on the line of the Washington County Railroad, seems fitting, especially at this season of the year when the fishing is at its best. The road passes this Pool within a stone’s throw, and fishermen on the banks and in boats can be communicated with from the tracks. One evening this week Mr. Albert French, within the space of an hour, caught two salmon, one weighing 16 and the other 19 lbs., and Mr. Frank Todd one weighing, 17 lbs. Other fishermen on the same evening had numerous rises, and hooked several, but failed to land their fish. During this month the fishing at the Pool is excellent, and if any doubt exists there are not plenty of salmon there, such a doubt would be easily dispelled by seating one’s self beside the pool and watching them leap and play. Some of these salmon ignore the fish way near by, and try their power in an effort to leap the falls, in which many succeed.”

Albert French is an interesting fellow. He lived his entire life on Union Street Calais and may well have been Calais’ first game warden.  As early as 1886 he is listed as a game warden in the City directory and these were the days when the first game laws were enacted. The laws were reviled and ignored by most fishermen and hunters and enforcement was arbitrary and dangerous. In 1886 Calvin Graves killed two wardens in Wesley when they threatened to shoot his dog for violation of the law against using a dog to hunt deer. It didn’t help the reputation of the Warden Service that many wardens of the time had previously been rather notorious poachers themselves and local sports believed a warden’s badge was simply a license to break the law. Whether Albert was this sort of warden we don’t know but the only photos we have of Albert show him posing with very large salmon. To his credit he did rescue a boy from drowning:

Albert French rescued the young son of Captain Lunn from drowning at Union Mills on Sunday evening.  Young Lunn, with other boys in a row boat, approached the boiling water at the foot of the falls when the former became frightened and jumped overboard.  Mr. French, seeing the peril of the young man, pushed from the shore with his punt and rescued him.  He was quite exhausted when taken from the water. 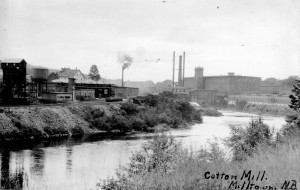 We’ll leave you with this photo of the Cotton Mill and Main Central Railroad rail yard taken from below the Falls. To the right is the Cotton Mill and to the left the very extensive and, in its day, busy rail yard on the US side at Salmon Falls. The   larger buildings were bought in the 1950’s by Beckett’s and became their primary warehouse. The turntable was removed only last year.  The best view of Salmon Falls is from the Canadian side in Milltown NB. Only from this vantage point can you see, especially when the water is high, the tremendous force and volume of water passing over the falls.