The Great War had reached a stalemate by the end of 1915. Hundreds of miles of trenches stretched from the English Channel across France to the Swiss border separating the armies of the Central Powers (Germany) and the Allies (England and France). 1916 would see several inept and bloody attempts by both sides to break the stalemate. The Germans attacked first at Verdun and were initially successful but Allied counterattacks stopped the advance and several months and 1 million casualties later the lines were virtually unchanged. As an indication of the ineptitude of both high commands, the French 72nd infantry division was completely wiped out during the battle by a French artillery barrage. General Haig, commander of the Allied forces, made an equally futile attempt to break the German lines at the first battle of the Somme. Again a million casualties, including an Austrian corporal named Adolf Hitler, wounded by shrapnel, did little to change the military situation. The U.S remained neutral throughout 1916 but German submarine attacks on neutral shipping in the Atlantic were pushing the U.S. inexorably toward war. Zeppelins dropped bombs on a very surprised Paris, the Red Baron registered his first kill and the Easter Uprising in Dublin against British rule over Ireland was brutally suppressed and many IRA members executed. 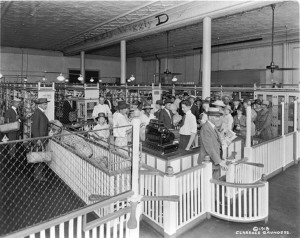 In the U.S. the first “supermarket”  a Piggly Wiggly opened in Memphis, the National Park Service was formed and General Pershing crossed the border into Mexico in pursuit of the Pancho Villa. After 11 months of a futile “punitive expedition” Pershing gave up the chase and returned home without Villa. Louis Brandeis became the first Jewish Supreme Court Justice and the issue of birth control made the headlines with the arrest of feminist Emma Goldman for giving a lecture on methods of birth control. Feminist Margaret Sanger was not deterred by Emma’s arrest and opened the first birth control clinic in the United States. She was promptly arrest on “obscenity” charges. In one victory for women Jean Rankin became the first woman elected to the House of Representatives. In sports the Red Sox beat the Dodgers in the World Series, the Giants began a 26 game winning streak with a win over the Dodgers and Grover Cleveland Alexander threw 16 shutouts during the season, some against the Dodgers. A young and generally unknown Austrian patent clerk named Albert Einstein finished his paper on the theory of relativity but his accomplishments went unrecognized in the scientific world. No Nobel prize for physics was awarded in 1916. 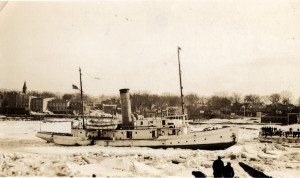 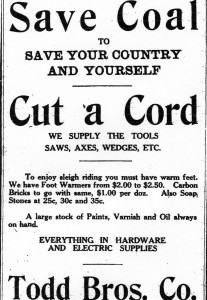 The St. Croix River froze early in the year and did not thaw until well into the spring. As coal was the main source of heat for most people and every pound came to Calais by ship, the situation became critical by the beginning of the year and in February of 1916 the Advertiser reported that only a week’s supply of coal remained in the city. The Fuel Committee of the city asked people to conserve coal and burn wood- hence the Todd’s Brother’s ad. In those days icebreakers were often used to make a channel for the coal ships. The ship above is on the Canadian side with the Calais waterfront in the background. The church steeple is the Knight Memorial Church, just across Main Street from the bottom of Monroe. 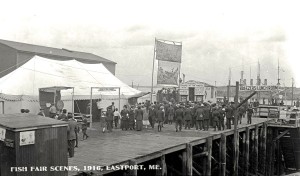 There was a “Fish Fair” in Eastport in 1916 and it may have been an annual event given the importance of the herring to the economy of Eastport and even as late as 1916 the harbor at Eastport was often full of vessels, both ships under sail and steamers. This photo is taken from Fort Sullivan. The Post Office is to the left center. 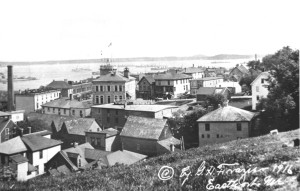 Calais was still shipping lumber to distant parts of the world in 1916. This photo dated July 12, 1916 shows the Eaton Lumber Wharf, known as the Eaton Long Wharf, at the bottom of Calais Avenue. We suspect the date on the photo may be incorrect. The schooners tied up to the wharf appear to be from an earlier era. By the 1940’s the wharf had been demolished and the area became the city dump. Trash was throw directly into the river from the trunks of cars and the backs of trucks to find its way either to the bottom of the river or points South. 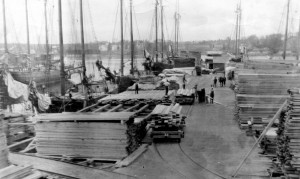 The 1916 Calais Fair was held at the fairgrounds in early September. Racing was the signature event of the fair and trotters were raised on several farms in the area. Among the list of advertisers in the program for the fair in 1916 who were still in business many years later were Bates Jewelers, Taylor Hardware, Beckett and Company, Steeves Plumbing, Ross Bros., Stewart Furniture, Murchie Insurance, Andrews Hotel, Trimble Bros., Todd Bros., and Scholl Undertakers. 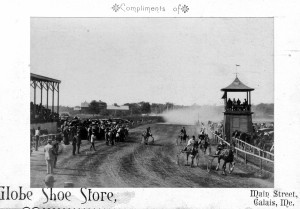 ​In 1916 Calais Avenue was lined with beautiful elm trees which grew to remarkable heights only to be felled by the Dutch elm disease in our lifetime. By the 1950’s their wide canopies provided cool shade not only to Calais Avenue but to the length of Main Street from the corner of the Avenue to Hinckley Hill. 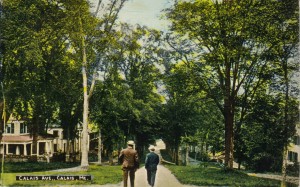 In  local news a bronze plaque was unveiled at Pleasant Point to honor members of the Passamaquoddy Tribe who had served the States in the Revolutionary War.  Dr. Socis Neptune, an expert in herbal medicines and the doctor of the tribe was the center of attention at the ceremony. 103 years of age, he died at Pleasant Point only four months later. Both Princeton and Woodland had well attended and , according to the Advertiser, rather rowdy fairs and Labor Day celebrations. In Court news there were complaints in the paper about judges dismissing liquor law violations for political reasons, two Poles were apprehended by pursuing Customs Officers in Baring after running the Milltown Bridge with 200 pounds of Canadian beef and 12 pounds of butter in the trunk of their rather poky get away car and a Mrs. Eva Smith was charged with punching the tax collector in the solar plexus after he came to her home to demand payment of delinquent taxes. On a more serious note  Miss Constance Dickey of Waltham Massachusetts arrive in Pembroke by train and went to the then empty home of Harlan Brown, a former boyfriend. She hid under the bed until Mr.  Brown had gotten into bed after returning home from a night out with his current girlfriend. Miss Dickey quietly crawled out from under the bed and slit the unfortunate and unfaithful lover’s throat. She then drew the knife across her own throat and wrists and collapsed on the floor. Harlan recovered but Constance died of her wounds. Howard Capen, treasurer of the Eastport Water Company, was stabbed in the heart during a daring daytime robbery but recovered. John Edwards of Perry, wanted for theft, escaped by threatening Deputy John McCart with a revolver and running into the woods. He turned up in Woodland where he shot Deputy John Black in the leg while resisting arrest. Edwards got 2 years in State prison for these offenses while, at the same term of court and before the same judge, George White and Mrs. Ethelyn Allen were sentence to 10 and 8 months respectively for adultery.