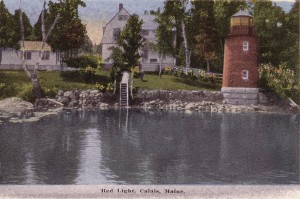 In 1892 the Coast Guard arranged to have a local mill operator, Mr. Whitlock, place a red lighted lantern on a post at this “dog leg” in the river because of the heavy traffic at that time. In 1909 the last lighthouse to be built in Maine was erected here, together with a keepers house. It is now a green flashing light known as Whitlock’s Light.  The light is located about 3 miles east of Calais on Route #1. It had a 4th order Fresnel lens now on display at the Maine Lighthouse Museum in Rockland. The 25′ 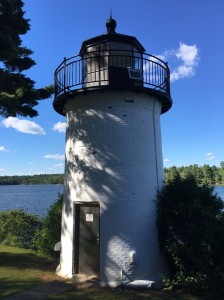 tower was originally red, but it is now painted white.

In 1997 the United States Coast Guard decided to relinquish ownership of all Maine Lighthouses and award them by competition to non-profit institutions in Maine. This Society applied to the selection committee and was awarded the property, the Coast Guard to maintain the flashing green light. InJanuary 1999 a quick claim deed was received from the Coast Guard transferring the property to the St. Croix Historical Society. We do not own the keepers house and that is privately occupied. However, the private owners have agreed that with advance coordination, small groups may visit it. The private owners graciously assist with maintenance of the light house and its bell tower.

View from the top of Whitlock’s Mills Lighthouse