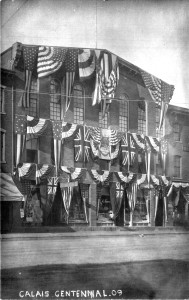 The St. Croix Valley has been described by historians and writers as an “International Community” and the residents of the valley have worked hard to live up to this description. The photo above is the Palladian or Schooner Block, now home to South of the Border, decorated for the 1909 Calais Centennial. There are nearly as many Union Jacks displayed on the building as American flags. Every celebration on the border in those days was an international event. This sense of community began with the first settlers even though the settlers, Americans on one bank and Loyalists on the other, had been on opposite sides during the Revolutionary War. Other than the Civil War era and Fenian scare immediately following, we have been remarkable successful over two centuries in maintaining this sense of community even when our national governments were at odds and, on one occasion, at war. 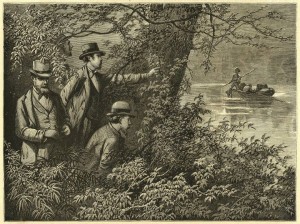 Until very recently, the four border communities have been largely one social and economic unit. Cross border romances and marriages have always been common.  Even during prohibition when alcohol was illegal in Maine, there was no serious attempt to stop smuggling across the St Croix. This 1873 illustration in a national magazine purports show revenue agents watching a smuggler approaching Calais from St Stephen. Louis Morrison tells of his trips to St Stephen as a youngster in the 1920’s on his uncle’s wagon to get loam. The team waited at the pit until the bootlegger arrived to load a dozen 3 gallon tins of Belgian 180 proof rum in the bottom of the wagon.  The tins were covered with loam and the wagon brought back across the bridge with a wink and a nod from the customs officer. In reality, the only division between Calais and St Stephen was political. St Stephen was not only a different town; it was in a different country. 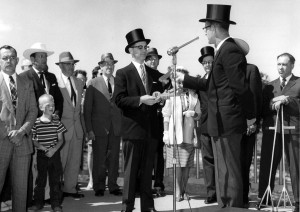 However even this changed during International Frontier Week in 1961 when the first and probably only international election was held on the U.S.-Canadian border and Bob Treworgy of Calais was elected to serve mayor of the entire international community  from June 30, 1961 to July 8, 1961.Frontier Week in 1961 was the predecessor of today’s International Festival and it was a very big deal. The program for Frontier Week is 100 pages long, listing 9 days of events. It included messages of congratulations from President John F. Kennedy, Prime Minister John Diefenbaker and other political notables. Original poetry in the program was interspersed with local histories and ads from nearly every business in the area. 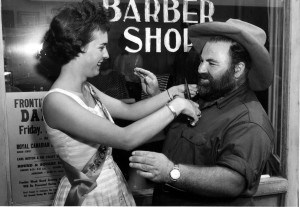 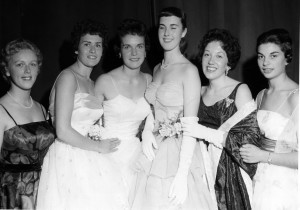 by Patty Stewart, third from the left and the Queen of the Valley for the the festival 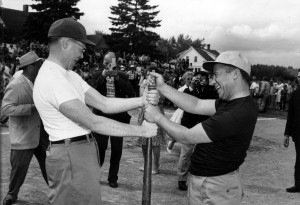 to a challenge baseball game between Gov John Reed and his executive council and Premier Louis Robichaud and his cabinet shown above vying to be the home team. The umpires were the Governor of Massachusetts and the Premier of Nova Scotia. Ted Williams hit a single for each side in the baseball game. 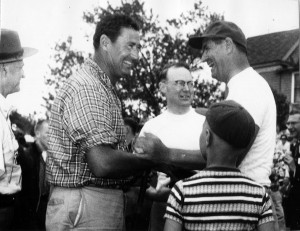 The fishing derby also featured Red Sox great Ted Williams and attracted many of the famous fishermen of the day to the area and each day was filled with concerts, dinners, grand balls, square dancing, contests of every sort 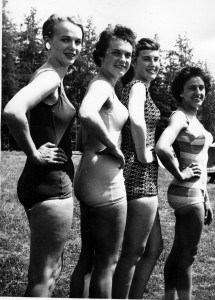 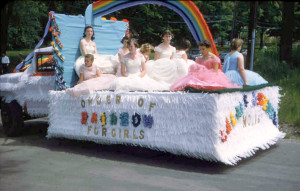 The parade was one of valley’s largest every with dozens of very elaborate floats such as the Rainbow float above. There has been some disagreement about the identity of the girls on the float. One respondent says Barbara Smith Virgil, Azalea Smith’s daughter is the queen in the back. Barbara Hall is girl in pink. To her right is Sandra Scott. However Faye Flood Robinson says the girls are as follows from the left and seated in front of the queen is Faye Flood, the Queen is Patricia Stewart, to her right only partially visible is Jane LaCroix, next and in the foreground is Hope Draper, the next girl’s face cannot be seen and can’t be identified, in the middle of the float facing forward is Geraldine Hill, only the back of the head of the next girl can be seen and she cannot be identified, in pink is Barbara Hall and in blue Sally Clark.

As noted above Bob Treworgy, Calais businessman and, for a week, Mayor of the entire St Croix Valley presided over the event. Bob says he was drafted by Bob Clark to be on the ballot. Jay Hinson says in the Advertiser that ballots were sent to dignitaries throughout the world, including communist countries, and were handed out to residents and visitors to the area. Bob recalls they were handed out at the bridge as folks came through customs and he says he was quite surprised to win. Many of the other candidates were better known in the area. Bob was a relative newcomer at the time and whether he was elected in a landslide or had to be installed by the Supreme Court following charges of fraud and ballot tampering he can’t recall. There were 7 other candidates and 700 ballots cast. The newspapers do establish Bob opened the Frontier Week ceremonies on July 1, 1961 on the bridge and was handed the keys of Calais, St Stephen and Milltown N.B. in recognition of his status as the first international mayor. These keys were locked away and a large single key to the community was given the mayor. Other international councilors elect included John McFaul of Calais, Mrs. Boardman Havey and Mrs. Stanly Smythe of St Stephen and Elwood Greenough of Milltown N.B.

The event attracted a lot of national and local media coverage. Jay Hinson, editor of the Advertiser, wrote many articles and editorials encouraging the Calais community to do more to support the festival committee. In an article on June 21st, he was quite critical both of the Maine Publicity Bureau and local businessmen and civic leaders for failing to match the dedication and commitment of our Canadian neighbors. The Province of New Brunswick had donated thousands to spruce up St Stephen. He wrote “St. Stephen N.B. has gone to the trouble, time and expense to decorate the town in a suitable way. Store fronts are being remodeled with sawmill edgings, peeled cedar and even birch bark in some cases. The government is always the last to act but in St Stephen a government building, the Post Office, will be trimmed in Frontier style.” In contrast he complained Calais has managed to hang some bunting from the buildings and done little more. In the end Jay pronounced the week a “Mammoth Success” although perhaps a bit too long. Certainly many of those who made the event possible were still around and involved in 1974 when the St Stephen Rotary Club organized the three day event which they called the International Festival, a week each summer which continues to this day to be a celebration of the our international community on the St Croix.