One of the most striking and beautiful places on the St. Croix River is Mill Cove in Robbinston where the Ridge Road, formerly the old County Road, and the old Eastport Road, now Route 1, meet. Going south the view to the left is of the bay, St Andrews, Joe’s Point which marks the mouth of the St Croix River and the remarkable sandstone cliffs which begin close to Route 1 and continue around the point. 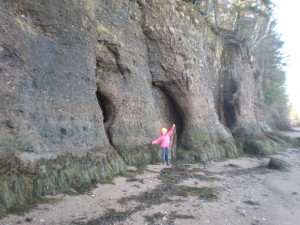 Mill Cove has been a popular picnic spot for well over a century, high school classes and social groups often took the steamship to Robbinston to spend the day at Mill Cove as shown in this photo of some members of the Calais Academy Class of 1898. 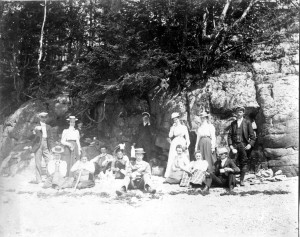 Courting and married couples such as Mr. and Mrs. Frank Todd, of the Calais lumber baron Todds, rowed downriver from Calais for some privacy and time together…. 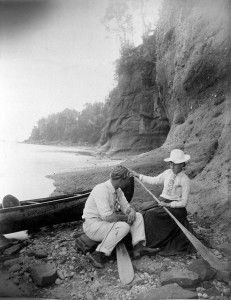 ….and it was the ideal spot for the perfect photo as seen in this iconic early 1900’s post card of two ladies walking under the sandstone ledges. 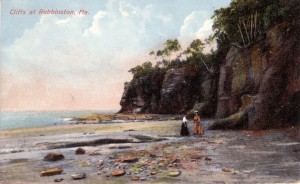 While Mill Cove is lovely the most interesting and distinctive features of the shoreline can only be seen by walking along the shore and around the point towards Lewis Cove in Perry. The sandstone cliffs become higher and more impressive, the view a spectacular panorama of the bay and after a fairly long walk along the shore toward Lewis Cove in Perry Pulpit Rock comes into view. 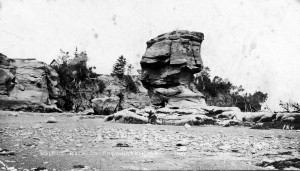 The sandstone cliffs of Mill Cove and Pulpit Rock cannot be better described than by geologist Charles Jackson in Maine’s first geological survey in 1837.

“Few rocks form a more regular arid graceful outline than the sandstone. The overhanging precipitous cliffs which skirt the St. Croix, on either side, present the observer with peculiarly picturesque scenery, illustrations of which will be found in the atlas accompanying the report. The precipices at Lewis Cove, in Perry, rise to the height of 50 or 60 feet, and present a perfectly mural escarpment; while the lower surface of the rock is worn away by the continual action of the tide waters, so as to undermine the cliffs, and cause a rapid degradation of the coast. The manner in which the sandstone yields to the action of water is curious ; the cliffs being worn away, so as to form rounded projecting masses, which give to the rock an appearance of heavy, elephantine architecture. Not unfrequently, large portions of this rock are detached from the main land, by the inroads of the sea; and lofty, castellated masses are isolated, and stand like giants in the midst of the waves. One of the most remarkable of these isolated towers is found at Lewis Cove, Perry. It is a single mass of red sandstone thirty-eight feet high, and worn at its base so that it is but eighteen feet in diameter. Its summit, which is 21 feet in diameter, is clothed with verdure, and supports a number of forest trees. This tower has received the appellation of the Pulpit Rock.”

Pulpit Rock has special significance to the Passamaquoddies. An article published in 1892 in the St Croix Courier authored by Mrs. Wallace Brown, an acknowledged expert on the tribal language and culture in the 1800’s, describes its importance.

“The echoes that are often heard along the eastern shore of the Saint Croix are said to be the cries of an invisible ’Chee-M’taoulin, (Giant Witch); and at Lewy’s Cove, a place nearly opposite St. Andrews, there is a perpendicular ledge called Pulpit Rock, but known to the Indians as M’taoulin-Penobsqu’, on the top of which m’taoulin from different tribes met and held high carnival, although it is quite inaccessible to common humanity.  The Bay of Fundy and its environs seem to have been peculiarly adapted to m’taoulin; and we hear of battles, short and decisive, being fought by Keewaqu’ and M’taoulin along its shores. “

Donald Soctomah today’s resident expert on the culture and language of the Passamaquoddies wrote us as follows:

“Pulpit Rock is also known as M’taoulin Rock, which means Medicine Man. The one image faces the rising sun and the other ledge image looks like a fire with four faces on each side (now there is a fish hawk nest on top of it). I go there several times a year and take school kids there to tell them stories of the MTaoulin Rock.” 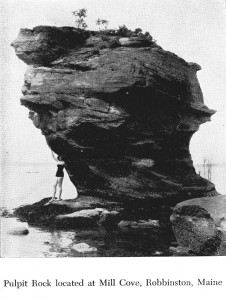 January is not perhaps the best time for a hike around the point at Mill Cove to Pulpit Rock but the next warm weekend when the tide is out there is no better way to send an afternoon. A more direct route to Pulpit Rock is from Lewis Cove which can be accessed from Horse Landing Road off the Gin Cove Road in Perry. However you would miss many of the sandstone cliffs and most of the “elephantine architecture” which so impressed Maine’s resident geologist in 1837. We advise taking a lunch and the long route.