Of the many fine policemen that have served the Calais area over the years, few are better remembered than old “Bull” Powers. Bull was beloved by many community members for his service in the 1950s and 60s. What follows is a piece written by SCHS President Al Churchill that includes some of the memories contributed by other society members: 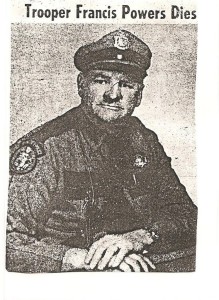 The “Bull” was Bull Powers, State Cop here in Calais during the 50’
and 60’s and there are lots of stories some of which I have collected
below. My Bull Powers story isn’t very exciting but shows what kind of
a cop Bull was. Back in my 60’s college days I owned  a 150 Allstate
motorbike, top speed about 45-50 downhill with a tailwind. I
hitchhiked home from the U of Maine one weekend intending to take the
bike back to Orono. Only after I got home did it occur to me the bike
was unregistered, uninspected, uneverything required by law and
nothing could be done on the weekend to make it legal. My parents
suggested I take care of all these irregularities before driving the
bike over the Airline but I didn’t see it as a serious problem, I
could take care of everything in Orono on Monday. Surely the cops
would understand. My folks said I should call Bull Powers to ask his
opinion and I did, assuming he would see it my way and perhaps even
give me some sort of unofficial permission. I had never met him but
knew of his reputation as a fair and reasonable cop. I must say I was
disappointed by Trooper Powers. He did not see the situation in a
sensible, realistic light, but instead agreed with my parents whose
wisdom, frankly, I had begun to doubt as I approached the point after
a whole year in college of knowing everything.

Sunday morning, very early I jumped on my motorbike and decided to
make a run for it. Not only would no really care but no one would be
out of bed. I didn’t see car until got just past Alexander but that
car was a State Police car parked on the side of the road. Standing
beside it watching me approach was Bull Powers, arms folded and a look
of stern disapproval on his face. “I’ve been expecting you” were his
first words, the next several hundred were designed, as we said in the
army, to rip me a new one.  I was pretty sure the Maine State Police
motorcycle crusher was on its way and I was ready to beg to share the
bike’s fate. Instead Bull said something to the effect that I had used
my one break from him and I was to park the bike when I got to Orono
and not drive until I had been to motor vehicle. I did as I was told.
Like Tom Webster says below we need more cops like Bull Powers. 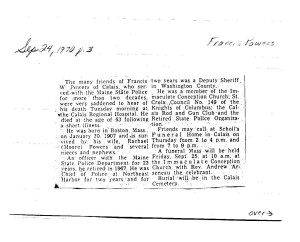 IN THE DOWNEAST AREA – GP was making paper in Woodland, during the
year they shut down the old #2 machine. People bought their groceries
at the A&P or IGA in Calais. Four new businesses opened in Calais, C.
F. Hathaway Shirts, Daggett Chevrolet, Barnard’s Rest Home, and
Taylor’s Furniture. Grossman’s in Eastport and Calais Box and Lumber
Co. in Calais were selling building materials. Machias Savings Bank
was paying 5¾ % on investment certificates. Folks bought their 45
records from Cecil Miller at the St. Croix Music Store; you could do
your photographic business with Harvey Studio at Cecil’s after the
winter fire destroyed their studio. Trooper Bull powers died and
Calais librarian Edith Beckett retired.

“[Bull] must refer to Bull Powers. Maine State Trooper. He stopped me once
for speeding and instead of writing a ticket took me home to my
parents; I would have preferred the ticket! I had just received my
driver’s license.” Dick Miles

“The famous Bull Powers our State Trooper .I wish today’s police were
more like him.” Tom Webster 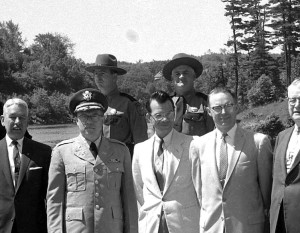 Bull Powers can be seen here in the back row on the left. Governor Reed is in front, as is city attorney Francis Brown. This is a photo from Frontier Week in 1961.

“The Bull was state trooper Frank Powers. I tried some time ago to find
out a little more about him but I wasn’t diligent in my research. As a
youngster some 60+ years ago, I may have met him. My father was
working as a janitor at the state police barracks near the Woolwich
end of the Carlton Bridge between Bath and Woolwich, and I would tag
along on occasion. Yet it seems that The Bull was patrolling in
Washington County—from what I’ve heard. (I guess that was later.)
I remember being in Vanceboro—where my grandparents lived—and I recall
my father repeating the saying “If the bull don’t get you, the
undertaker will.” And then, in looking at or describing a wrecked car
from memory, said that someone had painted on it “The Bull didn’t get
him.” I can remember exactly where I was when he said that, but I
don’t recall seeing a car at the site. Odd, the things we remember.
This is the type of thing that I latch onto, Al, as you know, and in
pursuing more about Frank Powers through ancestry.com and archives.com
I’ve found that he indeed did live in Bath, was listed in the city
directory for 1949 as Francis W. Powers, state police officer,
boarding at 229 Centre Street. In the directory for 1951 there is an
entry for him that mentions the bridge: “Main rd n bridge h at Bath.”
I’ve found a couple of newspaper articles reporting his arrests in
Bath and Woolwich in the 1940s. Here’s one from the Portland Press
Herald, Tuesday Morning, April 5, 1949:
Meanwhile, an even larger array of respondents appeared headed for
local court Tuesday morning as Deputy Loring D. Small, West Bath, and
State Trooper Francis W. Powers today ordered 14 Wiscasset men to
appear at Bath Municipal Court on charges of digging for clam worms at
Woolwich without license from municipal officers.
Francis W. Powers of Calais married Rachel G. Moore (or Rachel G.
Johnson) of Calais on 22 July 1953. There are two entries in the
records. Sometimes I can get an image of a marriage record, but not
this time. I’ve also found that a Francis W. Powers served as the
chief of the Mount Desert Police Department in the 1960s. And a
Francis W. Powers died in Centerville on 22 September 1970.
Centerville is in Washington County, of course. (I had to look that
up.)
This is kind of jumbled, but I find that a Francis W. Powers, born in
Massachusetts in 1907, enlisted in the Army as a private on 22
February 1941; he had completed two years of high school, and in
civilian life his occupation was listed as “Policemen and detectives,
public service.” He was 5’10” and weighed 181 pounds.” William Allen

“Dear Al–I am assuming the sign on the car is referring to State
Trooper “Bull” Powers –he was quite the icon here in the Calais area.
Lived across the Street from Bob and was married to Rachael (John
Moore’s sister). They had no children.” Mary McGraw

“Got to be Bull Powers who was the state cop…he came to Calais after
Shorty Thomas, who was a great guy, died…and married Shorty’s widow
and lived in her house on Elm St….Did anyone ever get a picture of
the door window at the municipal building which had a Moose and and a
Bull painted on it? Moose Harriman was the state police officer from
Woodland and a nice guy….The window was really cute…ask Grace
Meader about it because the reason that I saw the window was because
Margie and I were visiting her sister, Grace, who worked in the motor
vehicle office….
Funny the things I remember…Grace’s license plate number was 50,000
and her parents had 163 163…..one of the perks of her office….
In 1941 when we moved to Calais, Shorty Thomas worked for The Border
Express Company…and he delivered my mother’s sewing
machine….although I was only five, I remember that day very well
because he was so funny…tall, thin and funny….not long after that
he became a state cop… and from what I heard, he was very well
thought of…because his wonderful sense of humor was with him
always….I don’t know why he died so young but I remember how upset
people were about his death….”  Carol Allen 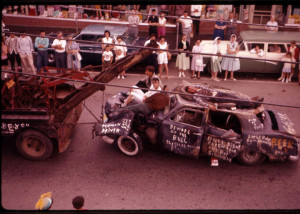 During the Frontier Week parades, wrecks were towed around showing the dangers of poor driving. This one from 1961 cautions “Beware of the Bull”.