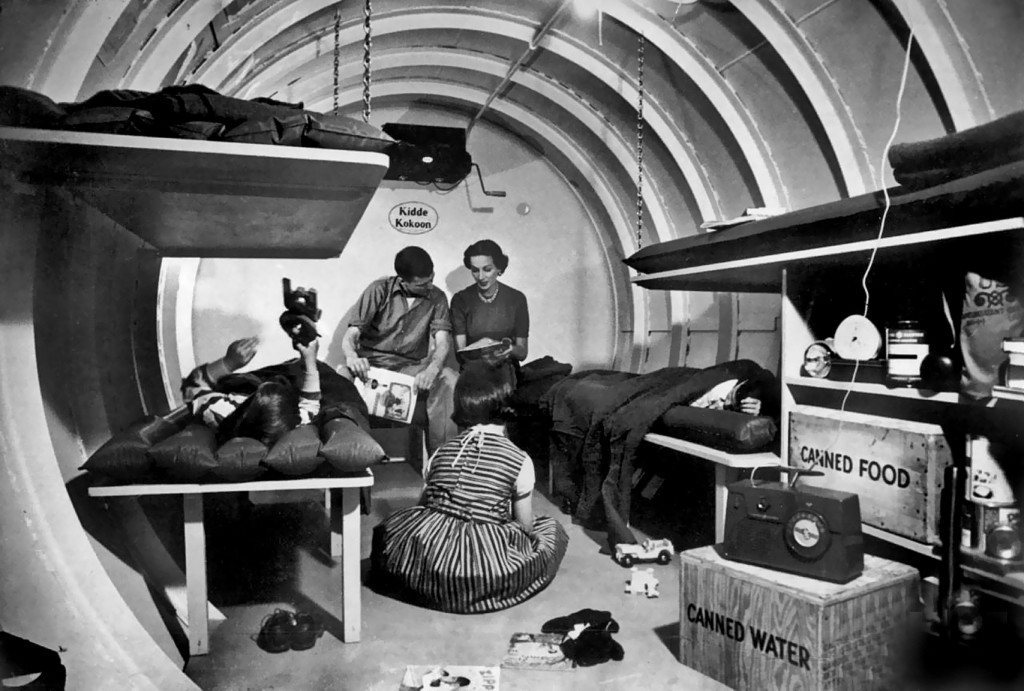 In 1957 the world seemed as close as it had ever been to the unimaginable, a nuclear war between the US and the USSR. The British had become the third nation to joined the nuclear club and relations between East and West continued to deteriorate. Both the Soviets and the US conducted multiple nuclear tests in 1957 of ever more destructive nuclear bombs. The situation became so tense that President Eisenhower took the unprecedented step of putting America’s B-52 fleet on full flying alert to prevent the Soviets from destroying our fleet on the ground.  Families continued to build bomb shelters like the very elaborate one pictured above under their homes and in their backyards but like the instructions for us school kids to climb under our desks, curl into a ball and cover our heads during a nuclear attack. These measures would have been completely ineffective. Even as kids we knew to add a final instruction- “and kiss your ass goodbye.” 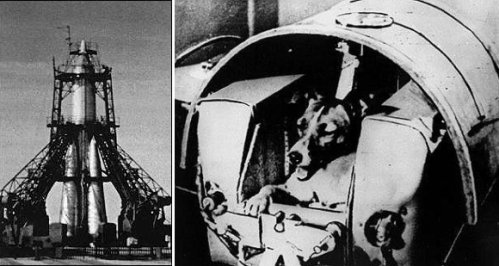 The anxiety increased in October 1957 when the Soviets launched the first satellite into space, Sputnik and followed it a month later with a second successful launch, this time with the dog Laika as a passenger. Sadly the dog did not survive but it seemed the Soviets were far ahead of us in the “space race”. The country was overtaken with a sense of panic and despair especially after an attempt by the US to duplicate the Soviet feat exploded after achieving an altitude of a couple of feet from the launchpad. The fact that we soon overtook the Russians in space technology did little to dispel the fear and incomprehension of the American people in fall of 1957. 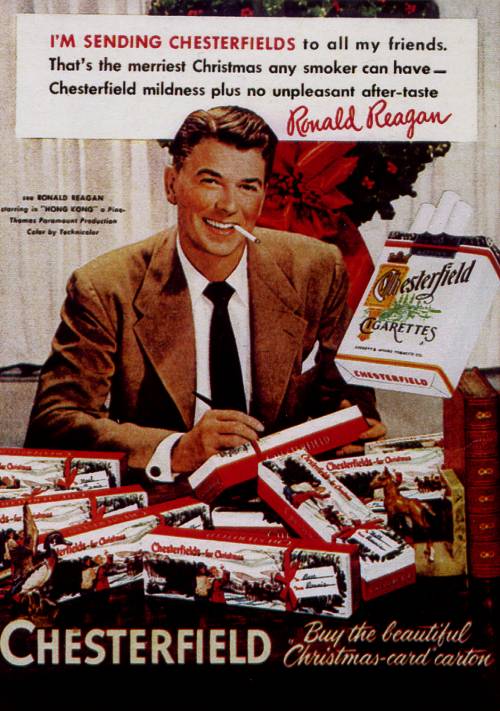 If the threat of nuclear annihilation weren’t enough for folks to deal with in 1957, the British medical authorities determined that cigarettes would surely kill you if the bomb didn’t. In those days, the majority of adults smoked, in the house, in car with the kids, in restaurants and bars – everywhere. Ronald Reagan found Chesterfields, one of the most lethal brands, to be a perfect Christmas gift. In his defense, the US Surgeon General didn’t get on board with his British counterparts until the end of the year so perhaps Ronald was unaware of the danger of his gift to friends and family. In fact, the tobacco companies managed to suppress any serious public action against their product for more than a decade. 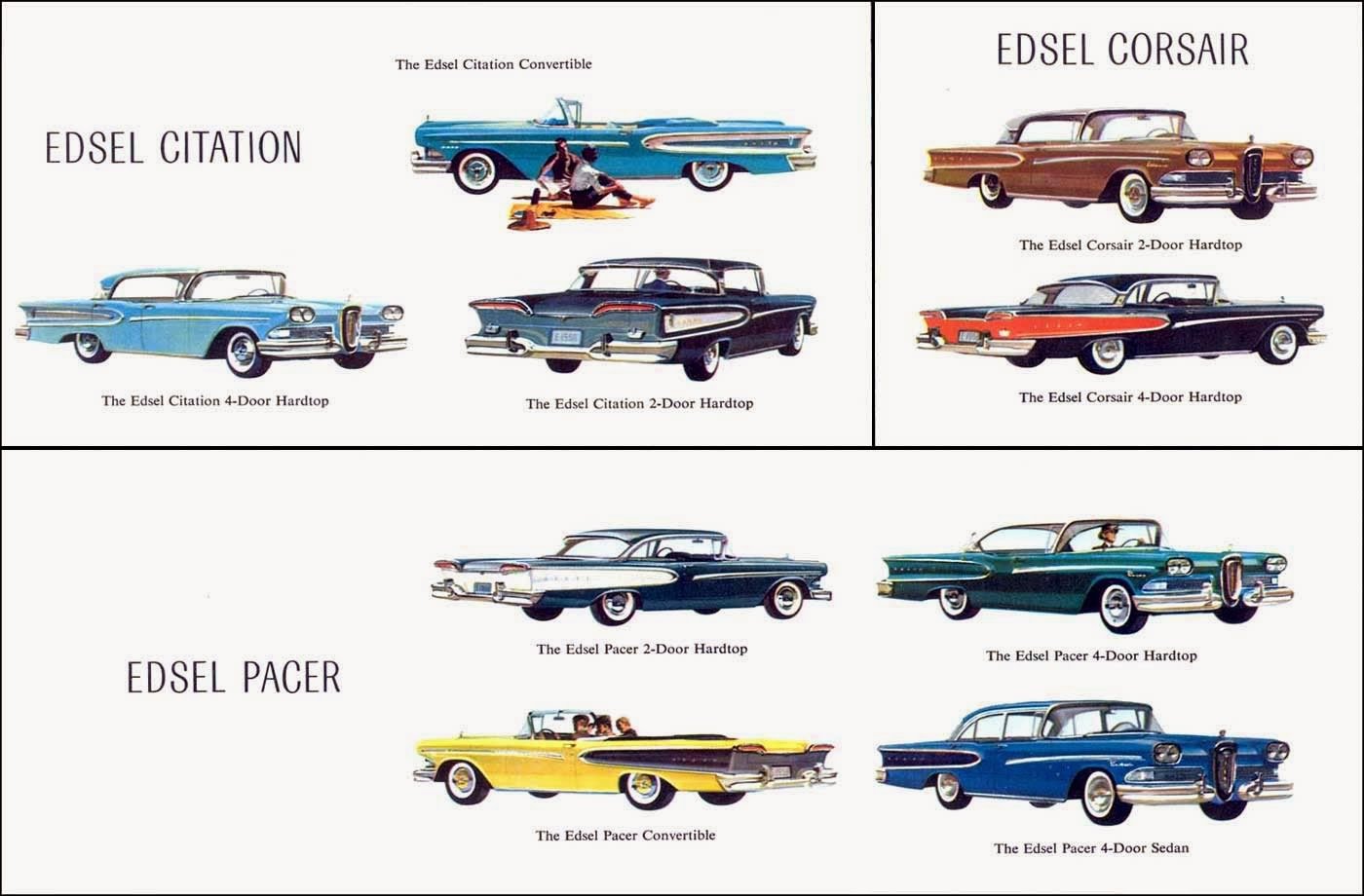 In 1957, Ford introduced a new line of autos – the Edsel. There were lots of models to choose from, all of them ugly, overpriced, over hyped with a host of mechanical and other problems which had consumers running for the exits. Ford headed the same way after a couple of years and lost a bundle of money and credibility.
In other news of 1957, President Eisenhower suffered a minor stroke which caused an already worried nation even more concern, and the Post Office cancelled Saturday delivery because of lack of funds. Public outcry motivated Congress to appropriate the money before the next weekend. Eisenhower became the first president to fly in a helicopter and the first black pilot flew a commercial airplane, exactly 100 years after the Supreme Court’s infamous Dred Scott decision in which Dred Scott, a slave, was found not to be an American citizen because he was a slave and therefore had no rights, not even to sue for his freedom.
On the culture scene, Jack Kerouac published “On The Road”, the bible of the beat generation, and John Kennedy won the Pulitzer for Profiles in Courage. The first Frisbee and electric watch came on the market.
In sports, the Red Sox offered the Cleveland Indians the unheard of figure of one million dollars for pitcher Herb Score and the the Indians turned them down, Hank Aaron was the National League MVP and the Yankees made the news for the Copacabana affair. 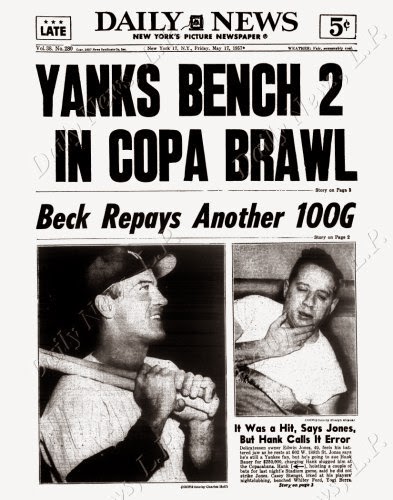 On May 16, 1957, Billy Martin celebrated his 29th birthday with a night on the town that ended at the famous Copacabana night club. He was celebrating that night with Mickey Mantle, Yogi Berra, Whitey Ford, Hank Bauer and their wives. The players ended up in a drunken melee and the incident was the eventual cause of Martin being traded to the Kansas City Athletics.
The entertainer Sammy Davis, Jr. was headlining the Copa that night when a group of bowlers entered the nightclub and began heckling Davis, including some racial epithets. The Yankees, being big fans of Davis, took offense to the name calling and came to his defense.
While there are many versions of what happened next, it is clear that the brawl resulted in one of the bowlers, a Bronx deli owner, ending up with a concussion and a broken jaw. Hank Bauer was thought to be the Yankee most likely to have punched the abusive bowler and a lawsuit was brought.
Below is an excerpt of the grand jury testimony involving Mickey Mantle:
“Well,” asked a grand juror, “did you see a gentleman lying unconscious on the floor near the Copa entrance?
“Yes I did,” Mantle answers.
“All right. do you have an opinion as to how this could have happened?”
Mantle thought about the question and then, with a serious look on his face, said “I think Roy Rogers rode through the Copa, and Trigger kicked the man in the head”
The Grand Jury broke out laughing, and an hour later the district attorney threw out the case for insufficient evidence.
The above was written by Mark Ahrens, a baseball historian. 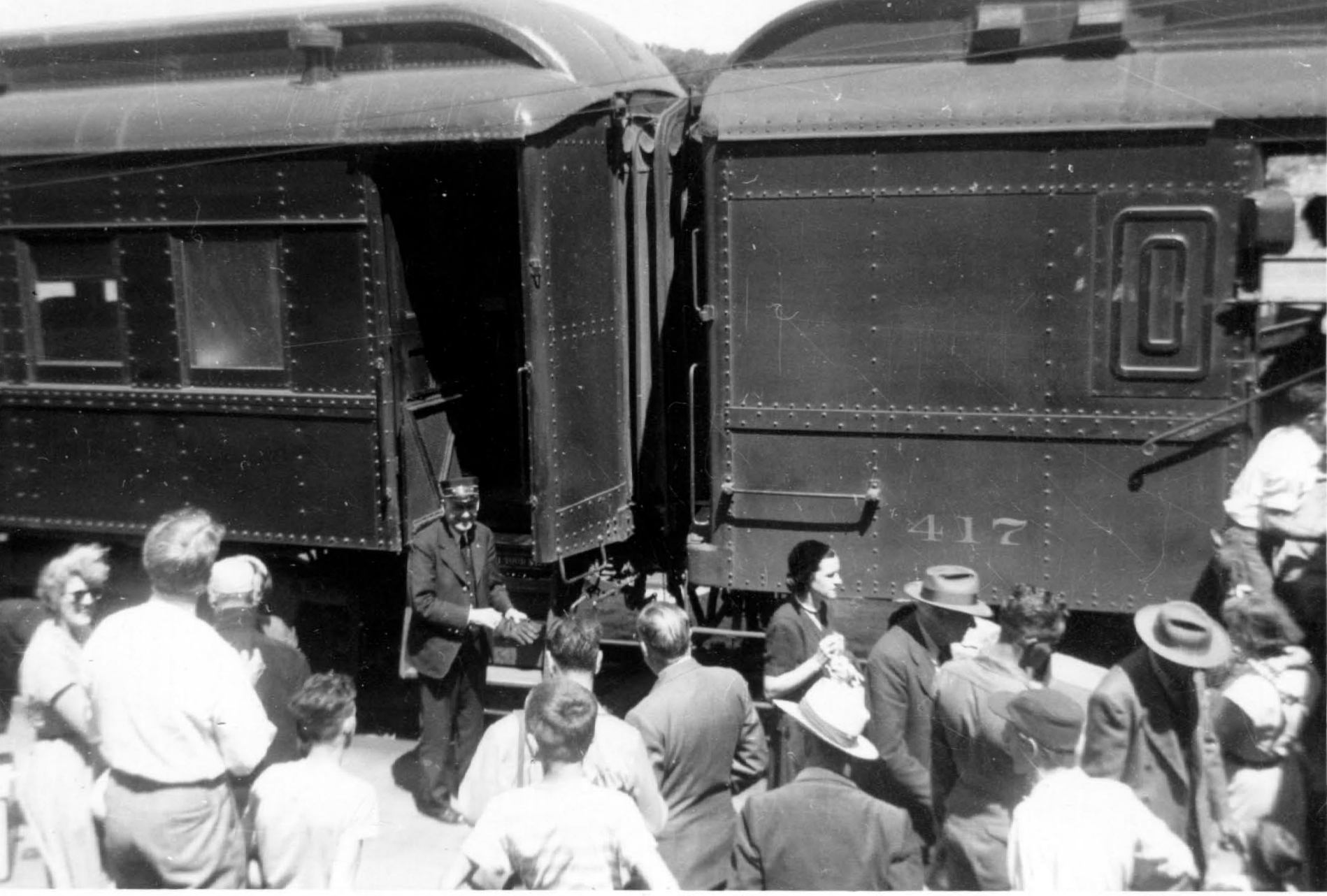 Locally, the news was dominated by transportation, some news was good, some not. The bad news came from Maine Central which discontinued passenger service to Calais on November 23, 1957. It was the end of an era symbolized by the conductor in the above photo – Ross Haycock. The photo is actually 1953, the day Ross retired after 67 years working on the railroad. Even though the Airline was not yet fully paved it was still quicker and more convenient to travel by car than train by 1957. 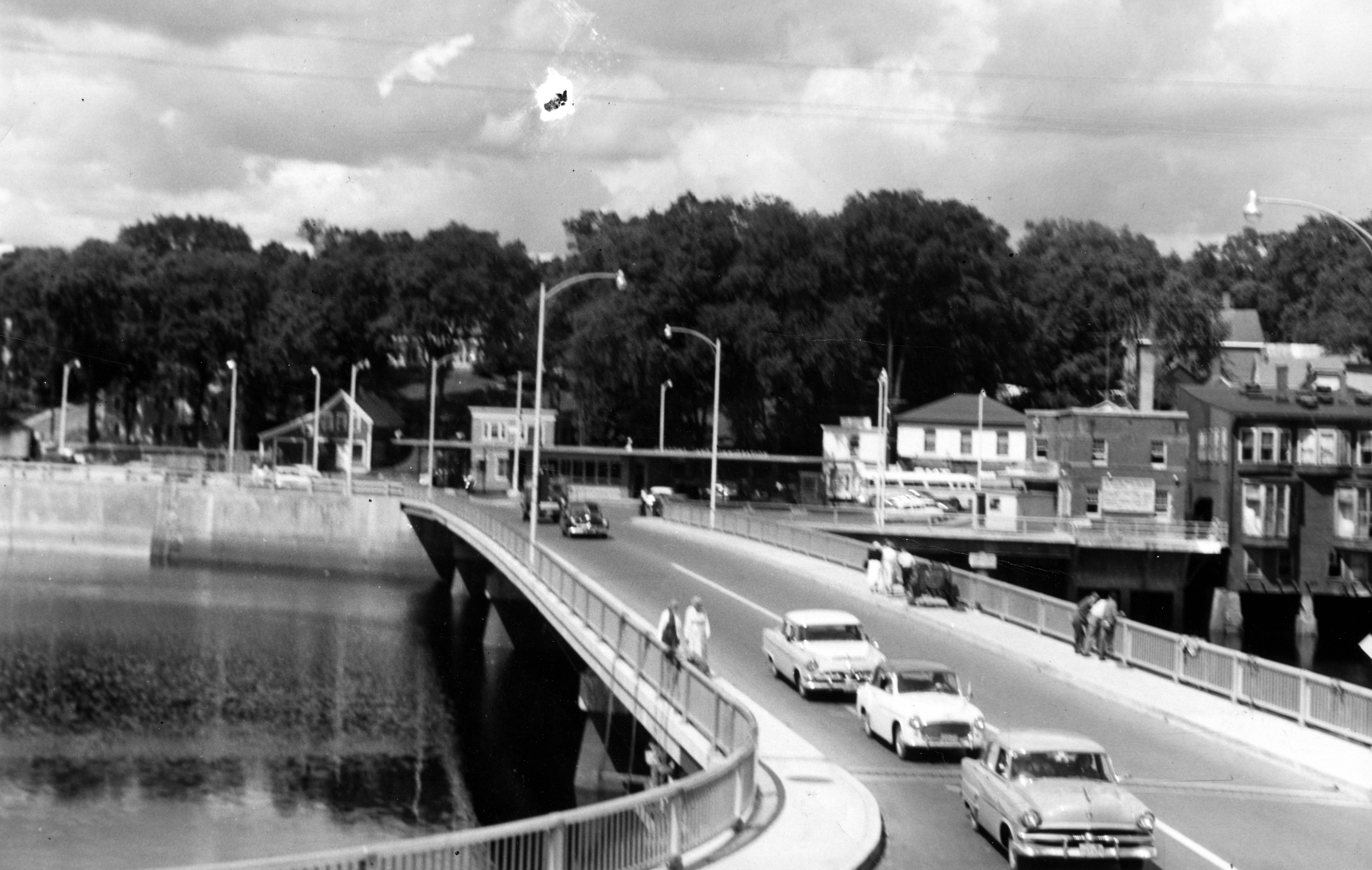 On the plus side Calais did get a new bridge at Ferry Point in 1957. It was built slightly upriver from the old bridge. 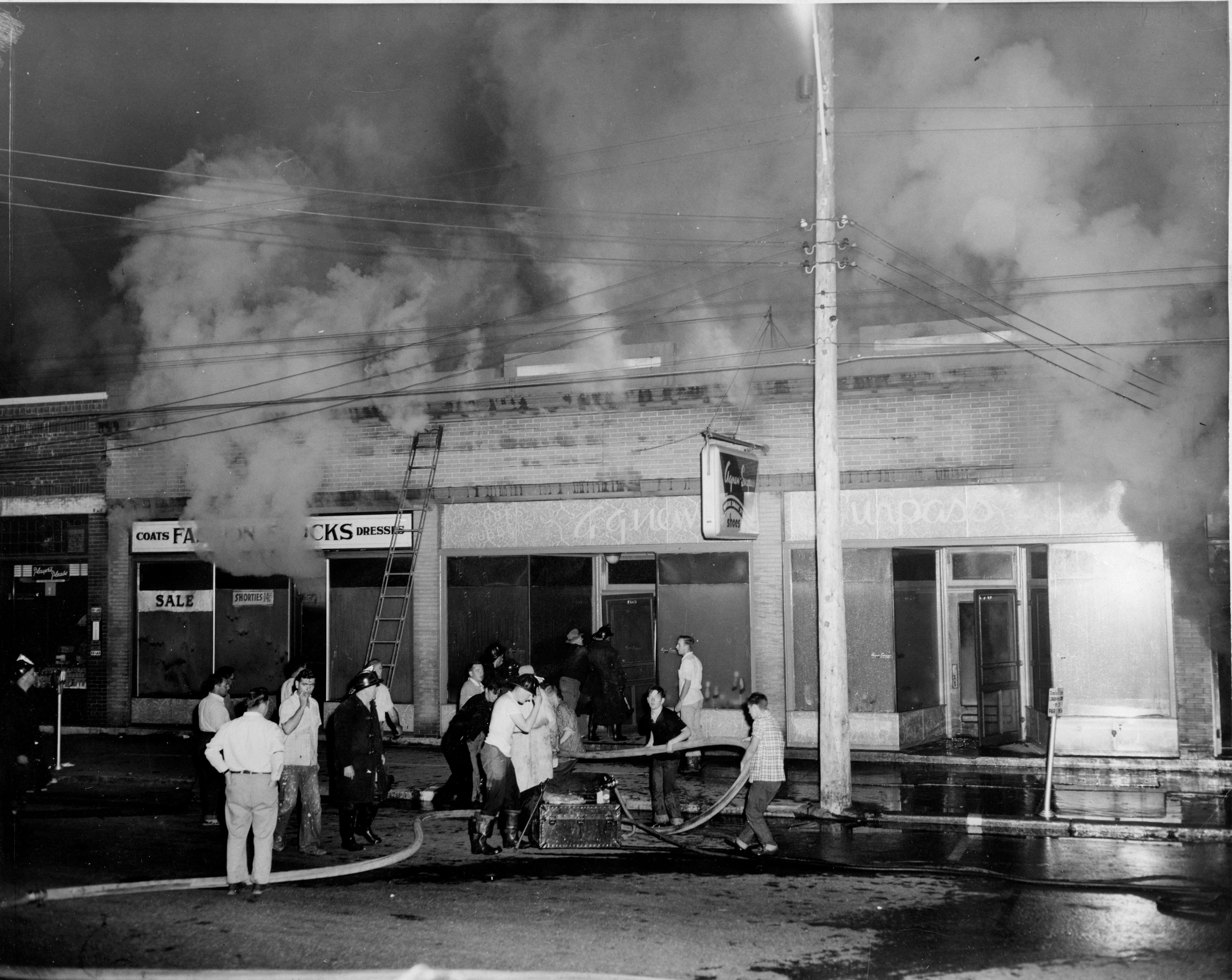 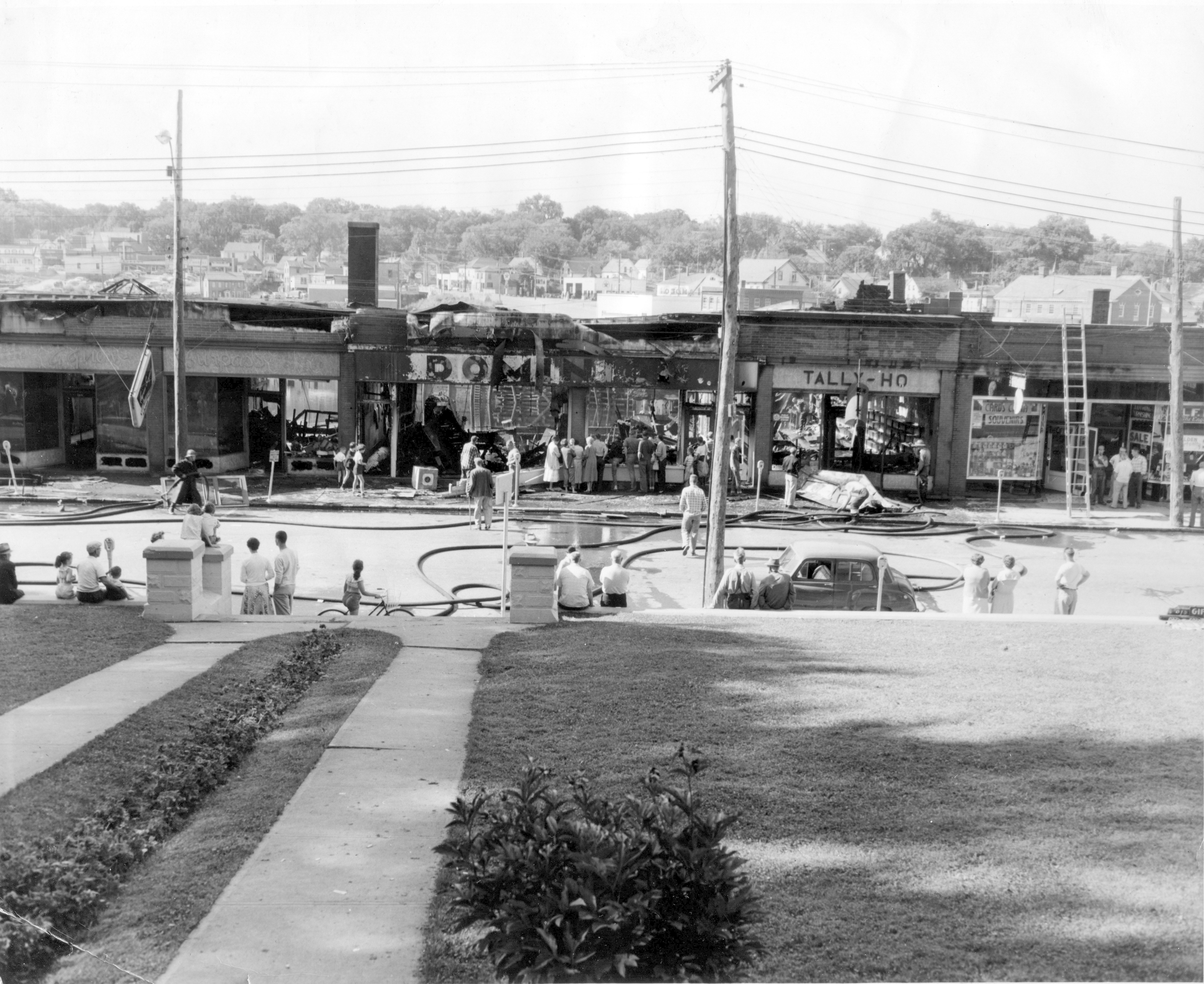 ​Those going over the new bridge to shop in St Stephen, however, would not have been able to trade at the Dominion Store, Tally-Ho or Fashion Frocks as these burned in August of 1957, 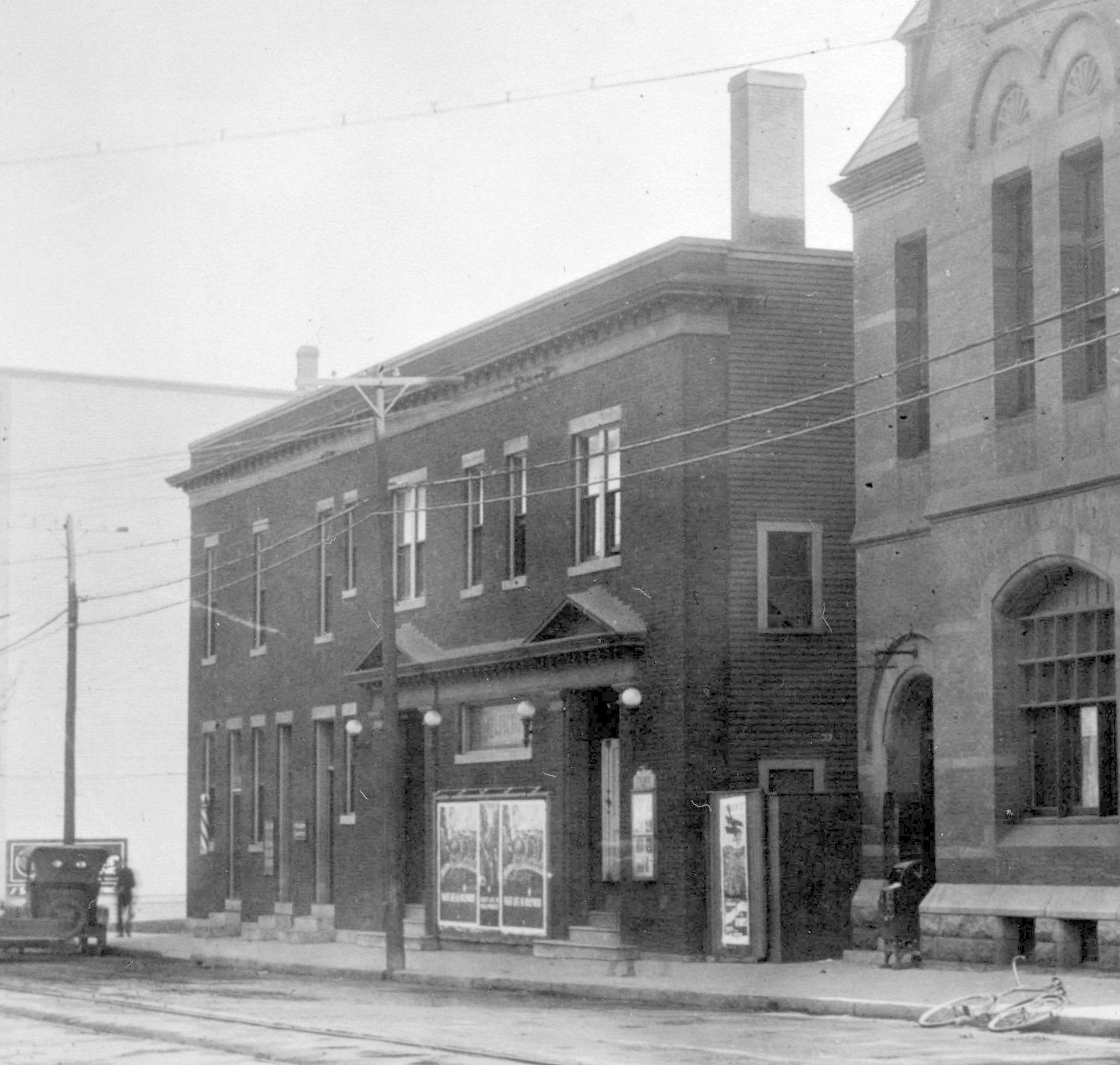 ​or go to the movies at the Queen Theatre as it closed its doors in 1957. The above photo of the Queen was probably taken in the 1930’s. However after fire consumed the State Theatre in Calais in 1958 the Queen reopened and operated successfully for many years. 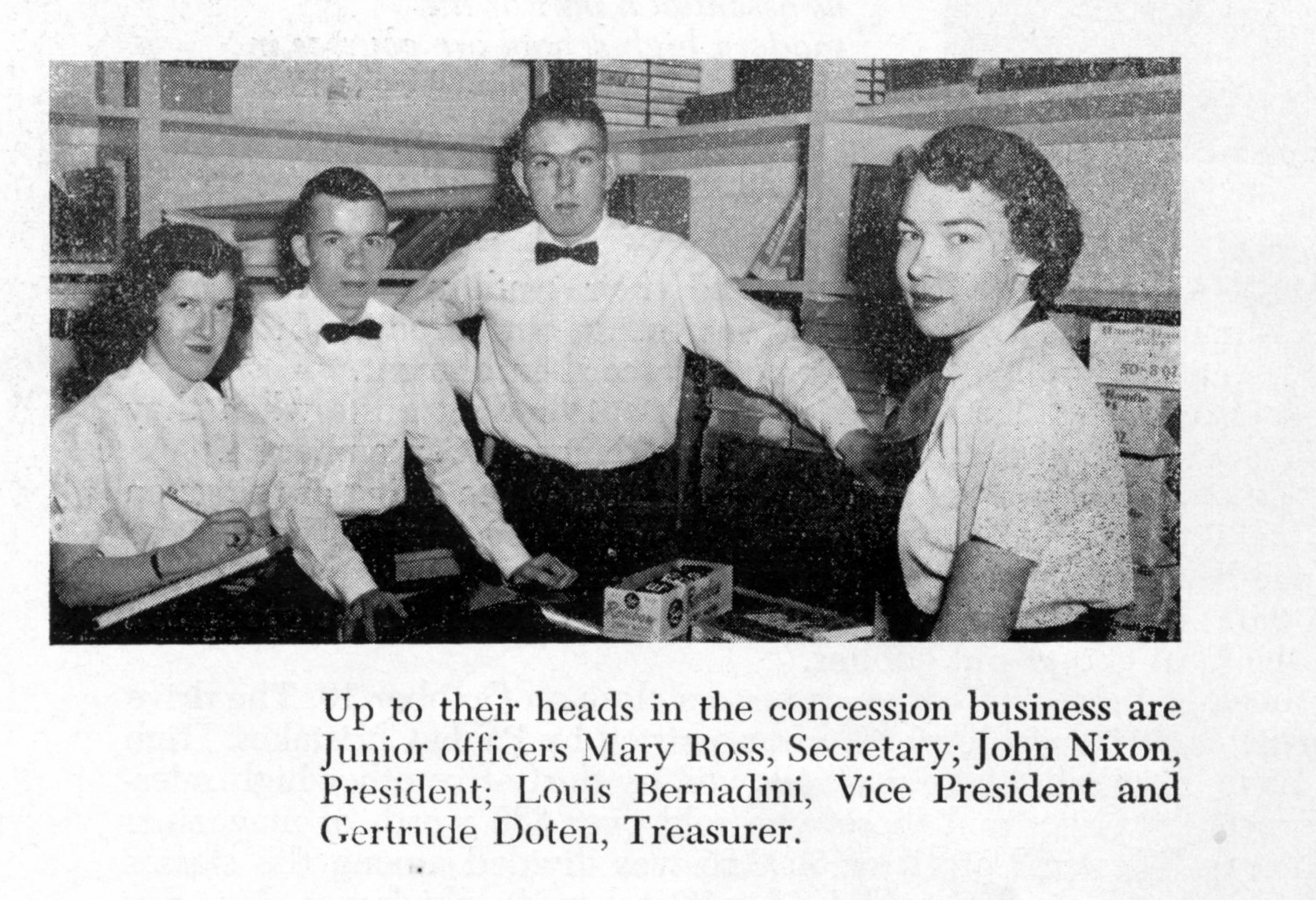 At Calais High School, John Nixon was President of the Junior Class, Mary Ross was secretary, Louis Bernardini was VP, and Gertrude Doten was treasurer. 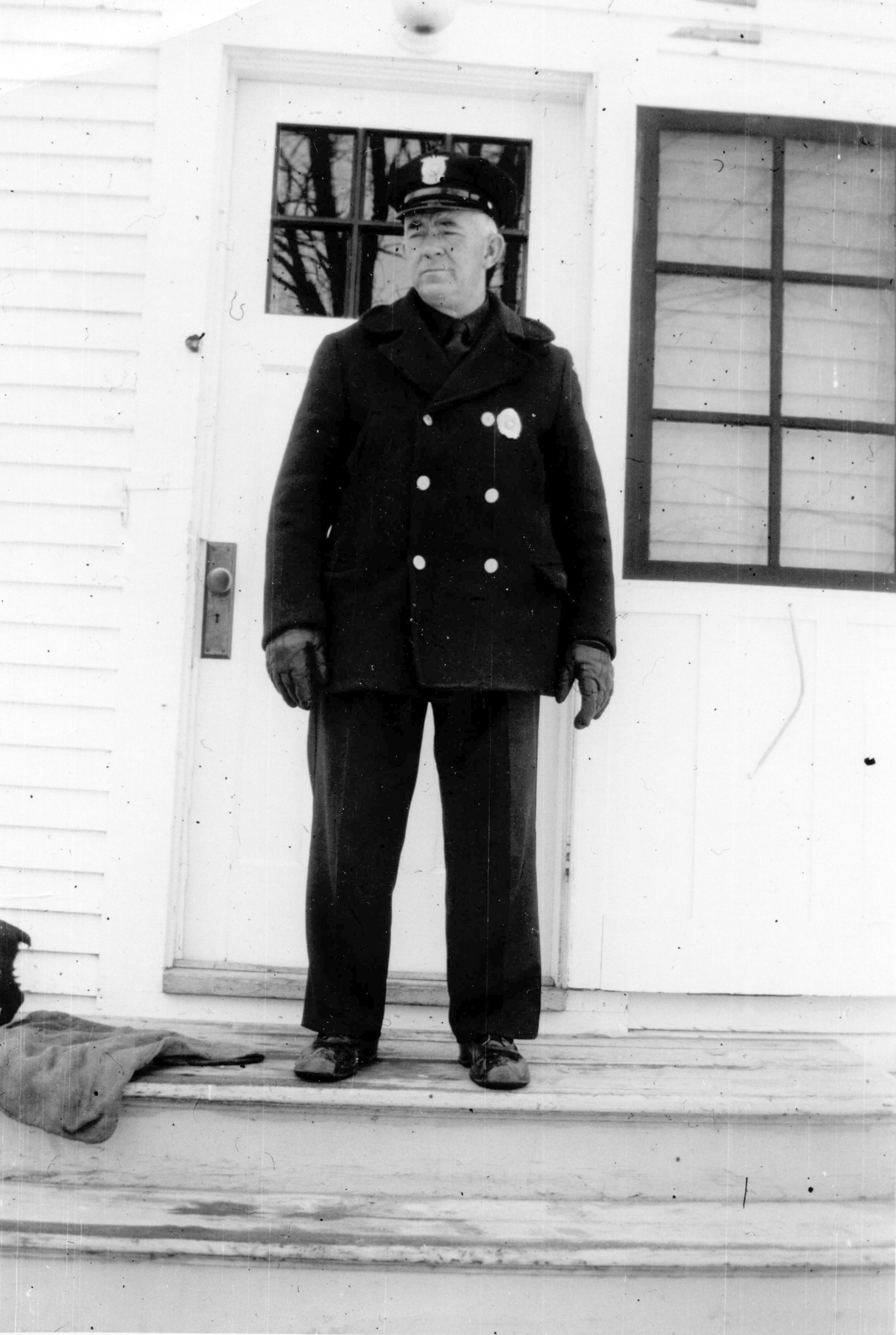 The chief of Police in Calais in 1957 was Luther Barnes, 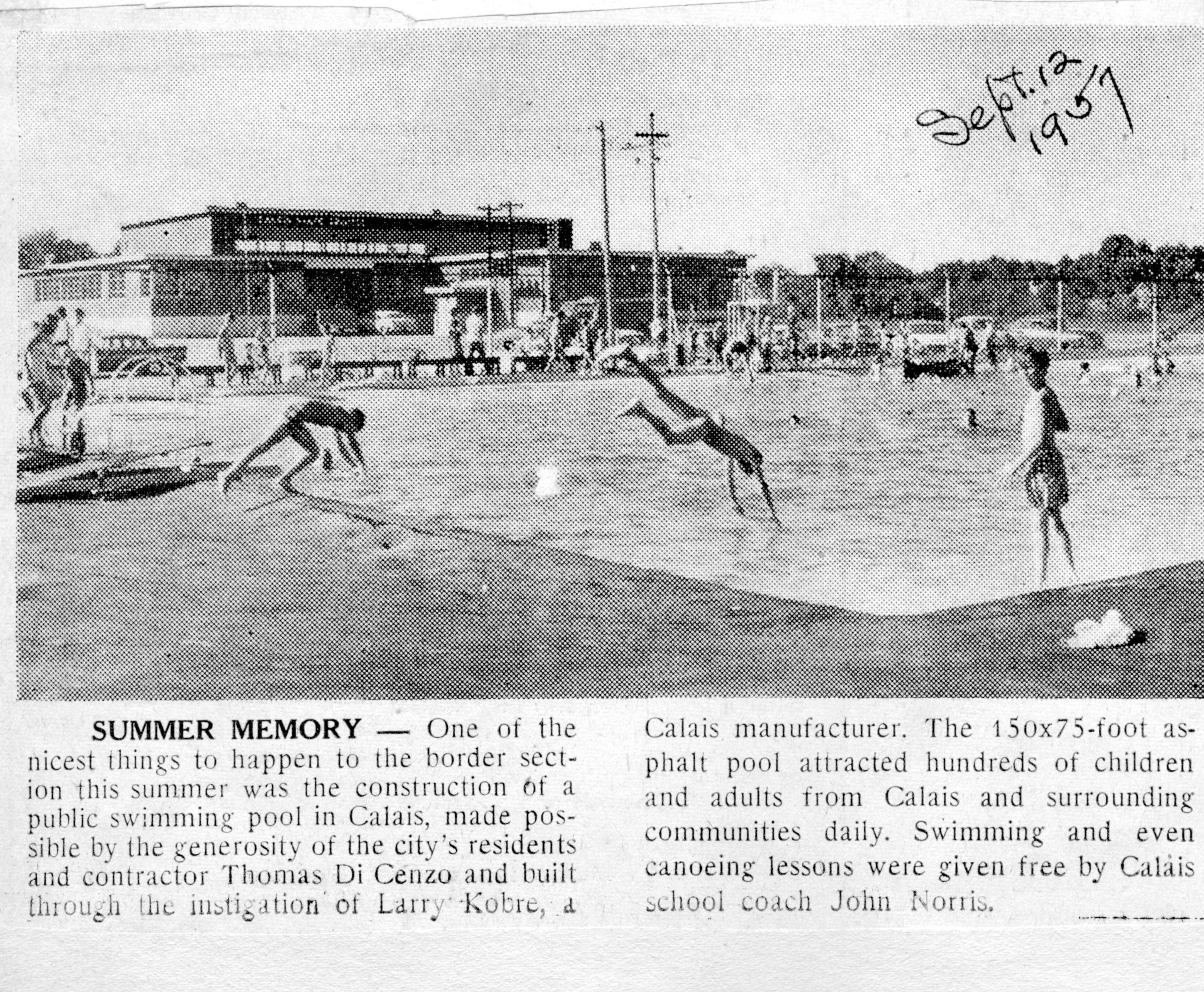 ​and, late in the summer of 1957, the Calais Pool was finished and opened to the joy of every kid in town.
In  August 1957, the family could go the Drive-In on the weekends to see Jerry Lewis and Dean Martin movies such as Pardners, kids under 12 were free. During the week, the fare was Marlon Brando, Glenn Ford and Machiko Kyo in The Teahouse in the August Moon. The Calais Lions sponsored the Clyde Beatty Circus during the week of July 13th.
Finally on August 26, 1957 in Woodland, the town’s nerves were set on edge when the Post Office Clerk, Mrs Harvard Dwelley was badly beaten and robbed at the Post Office. Thieves stole 520 blank money orders and the stamps to certify the money orders were valid. The newspaper report said the money orders would have been easily negotiable in any store in the United States and Canada,  Mrs Dwelley was so badly beaten that she could not give a good description of  her assailants. We do not know if they were ever caught but if anyone has any information please let us know.