1948 was year the temperature of the “Cold War” dropped several degrees from merely cold to bitter cold with a serious wind chill. The Russians blockaded Berlin and Winston Churchill who had coined the term “Iron Curtain” continued to warn of Soviet expansionism. President Truman had taken heed of this warning and in a speech in January 1948 warned the American people he intended to raise their taxes to pay for a controversial program proposed by General George Marshall to resuscitate the economies of Europe which had not yet begun to recover from the war. It was a bold and courageous move by Truman who was up for reelection in November. All the polls pointed to his defeat by Dewey. It was so certain the Chicago Tribune didn’t even bother to wait for the final vote count. Its bold headline after the polls had closed announced “DEWEY DEFEATS TRUMAN!” , a gaff the Tribune has not lived down to this day. In fact, Truman had won the election. The Marshall Plan proved a remarkable success and prevented the Soviets from making further inroads in Europe. The Berlin Airlift kept Berlin alive until the Soviets eventually lifted the blockade.

In the U.S. Truman desegregated the armed forces, another measure very unpopular with much of society and the Supreme Court ruled prayer in schools unconstitutional. Maggie Smith of Maine was elected to the Senate making her the first woman to serve in both houses of Congress. In entertainment the famous jazz singer Billie Holiday who was serving time on a drug charge was released from prison for good behavior and 11 days later played to a full house at Carnegie Hall. Ted Mack’s Amateur Hour premiered, the CBS evening news went on the air for its first broadcast and T.S. Eliot won the Nobel Prize for literature. In Sports NASCAR was formed, Babe Ruth died and the Yankees, Red Sox and Indians all finished the season with identical 91-56 records. The Indians eliminated the Sox and went on to win the World Series. On May 21st Joe Dimaggio hit for the cycle and on May 23rd he hit homers in three successive at bats on the way to great season but not a World Series. 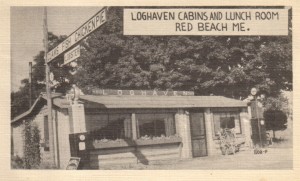 In Red Beach 1948 saw the opening of the the Loghaven Restaurant. It was owned at the time by Tom Gallagher but later run by Ruth and Allen Nuthall. Lots of local folks recall eating there. The building was still standing until a couple years ago, it was very close to Route 1 and just to the right of John and Pat Owens new home. 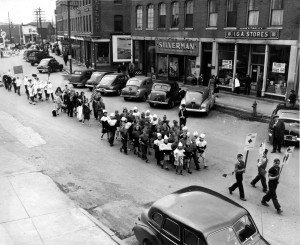 This 1948 photo shows a parade on Main Street promoting the Red Cross, its first aid classes and blood drives. It provides a nice view of that section of Main Street across from the St Croix Hotel before Silverman’s moved down the street and the IGA built its store on Washington Street. We’re not sure if that’s Murray Tingley standing in front of the IGA in the white apron, the sign over his head says Cheerios and Post Raisin Bran 17 cents. 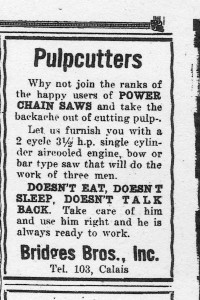 This 1948 ad marks an important milestone for the logging industry- the gas powered chain saw which “doesn’t eat, doesn’t sleep and doesn’t talk back” came on the local market. Sold by Cole Bridges the first saws were very heavy and not particularly reliable but they improved quickly and revolutionized logging. 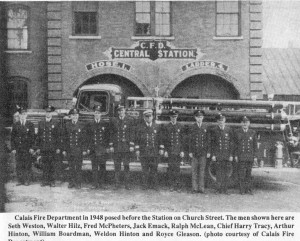 The Calais Fire department had some familiar faces… 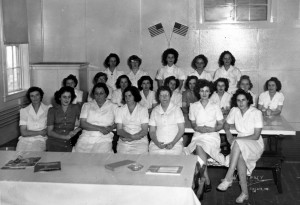 The Ware Knitters crew in 1948 included Francis Culligan, Avis McLaughlin, Annie Lawless, Isabel Whidden, Pauline Johnson, Annie Higgins, Cora Clark, Virginia Howland and Elizabeth Oliver. We don’t know where they are in the photo and could use some help on this together with the rest of the names. 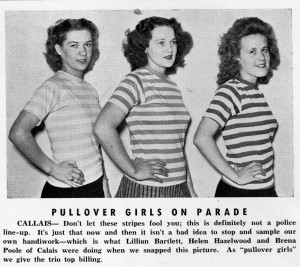 and they sometimes doubled as models.

In other local news the Princeton Lakeside Theatre was still showing nightly movies, Ober and O’Neill and the Calais Lions Club sponsored an outdoor skating rink on Lafayette Street and the Department of the Interior restored St. Croix Island to the status of a “national or historic shrine”. The government announced the owners of one half the island had agreed to deed their interest to the government which already owned the other half. Some well known local residents died in 1948 including Dr. Walter Miner, who founded the first hospital in Calais and Bruce Belmore, the distinguished native of Princeton who wrote a detailed history of the town.  The body of  World War 2 veteran, Ernest Perry of Calais, was returned to Calais for burial. He died in combat in the Philippines in January 1945. His body was the first to be returned from overseas for burial, many more were to follow.  Tom Bridges of Calais, the County Attorney, dismissed a murder charge against Margaret Marcil of New York. Her husband had died of heart failure on a visit to the area after the two had had a long and bitter domestic dispute. When removing the body the authorities “detected a strange odor” in the home which they believed to be amyl nitrate, a heart stimulant, and arrested Mrs. Marcil for murder on the theory she had given him a lethal dose. Mrs Marcil was locked up in the Washington County Jail until the pathologist’s report found “not a sufficient amount of any drug to cause death”. Interestingly the article about this case was not found in any of the local papers but was reported in the New York Times. It seems the local authorities were a bit embarrassed about the entire affair.