For those of us born after World War Two the image of the post war years can best be summed up by the iconic photo of the “Kiss” in Times Square, the return of millions GI’s and by the fall of 1946 the lines forming at the maternity hospitals to deliver the millions of us baby boomers who have now unexpectedly gotten old and a bit crotchety.  In truth, while the violence of the war had ended, its aftermath was no bed of roses for the survivors, especially in Europe where starvation and the dislocation of tens of millions took a tremendous toll. Even some folks in Calais were suffering according to a letter in the paper:

Milkmen are spreading the news this week that their product was up a cent a quart. And one day this week there was no bread in town. We have no meat and no butter, crackers and all wheat products are getting scarce. You have to know the right people to get a package of soap powder! Daily we hear blasts in the paper accusing us because we are wallowing in plenty while other nations stave. Is somebody kidding?”

Those locals not too stressed about the cracker shortage joined the rest of the world in rapt attention to the trials of the Nazi hierarchy which began at Nuremberg in 1946. The first verdicts were handed down to the high level Nazis by the tribunal on October 1, 1946. As reported by the NEWS above, most of the Nazi elite were to hang for their crimes. The executions were carried out 15 days later with the exception of Hermann Goering who cheated the hangman by taking poison after the verdict. The October verdicts and executions were just the beginning of the reckoning: hundreds of Nazis, collaborators and prison officials were executed for their roles in the Holocaust and for waging aggressive war. The hangman, photo above, was U.S.Master Sergeant John Woods who was himself a controversial figure and is said to have botched the hanging of many of the top Nazis by failing to provide a sufficient drop to cause immediate death. Given the crimes of the hanged there was little comment or criticism at the time.

Other world news in 1946 was to have a significant impact on many of the baby boomers who were being sent home wailing from the maternity wards. In addition to a pacifier these babies should have been issued a draft card as 1946 saw the election of an unknown Vietnamese nationalist, who went by the name of Ho Chi Minh, to the Presidency of Vietnam. The French were then trying to reclaim their colonial empire and, meeting resistance from Ho’s forces, the French shelled the harbor at Haiphong in North Vietnam, killing 6,000. The Vietnam War had begun and over two million baby boomers would eventually be drafted to fight Ho’s armies and about 10% would become casualties.

In the United States, President Truman established the CIA, the armed forces were desegregated and the Roosevelt dime was issued. Gas was 15 cents a gallon, the electric blanket and Tupperware hit the market and the bikini was introduced in, of course, France. In a television first Henry Morgan removed his shirt on national television and bared his chest. In Calais the construction of the new high school was the talk of the town especially among the students who were mighty tired of split sessions and attending school in dilapidated buildings like the South Street School which had been closed for years but reopened after a fire in 1945 destroyed Calais Academy. When not in school, the kids in town were raising money for a gymnasium which was not in the school building construction budget. Through local fundraisers the money was found and the gym built. It can be seen above, nearly constructed, in a photo taken from the corner of High Street. 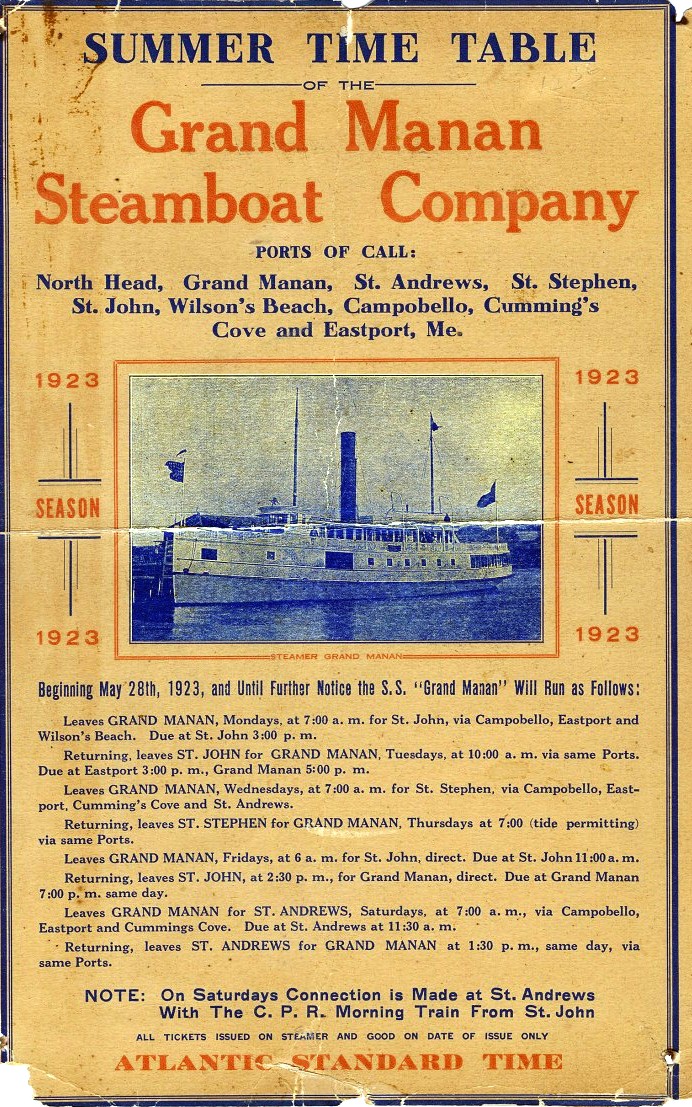 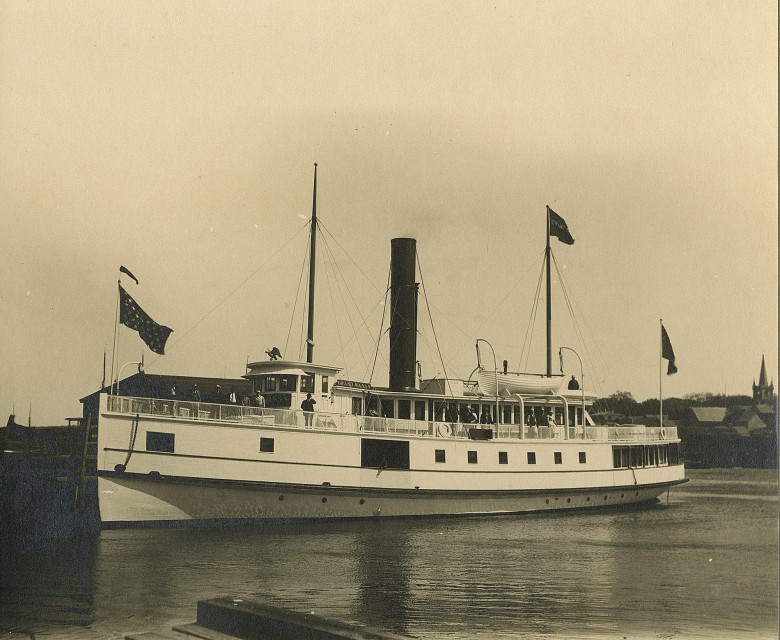 An era came to an end with the final trip of the Grand Manan in 1946. Since the 1820’s, steamships and other boats had made regular trips up and down the river to Calais, St. Stephen, Robbinston, St Andrews and Eastport and across to the islands in the bay carrying mail and passengers. There had been several Grand Manans over the years, all fine and well appointed vessels, primarily plying the waters on the Canadian side but connecting with Eastport and the steamships on the U.S. side such as the Rose Standish and Henry Eaton. While mail boats continued to provide service after 1946 none were truly ships of the class of the Grand Manan. 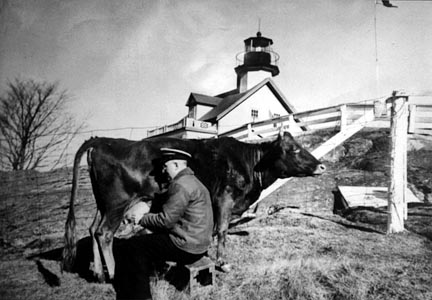 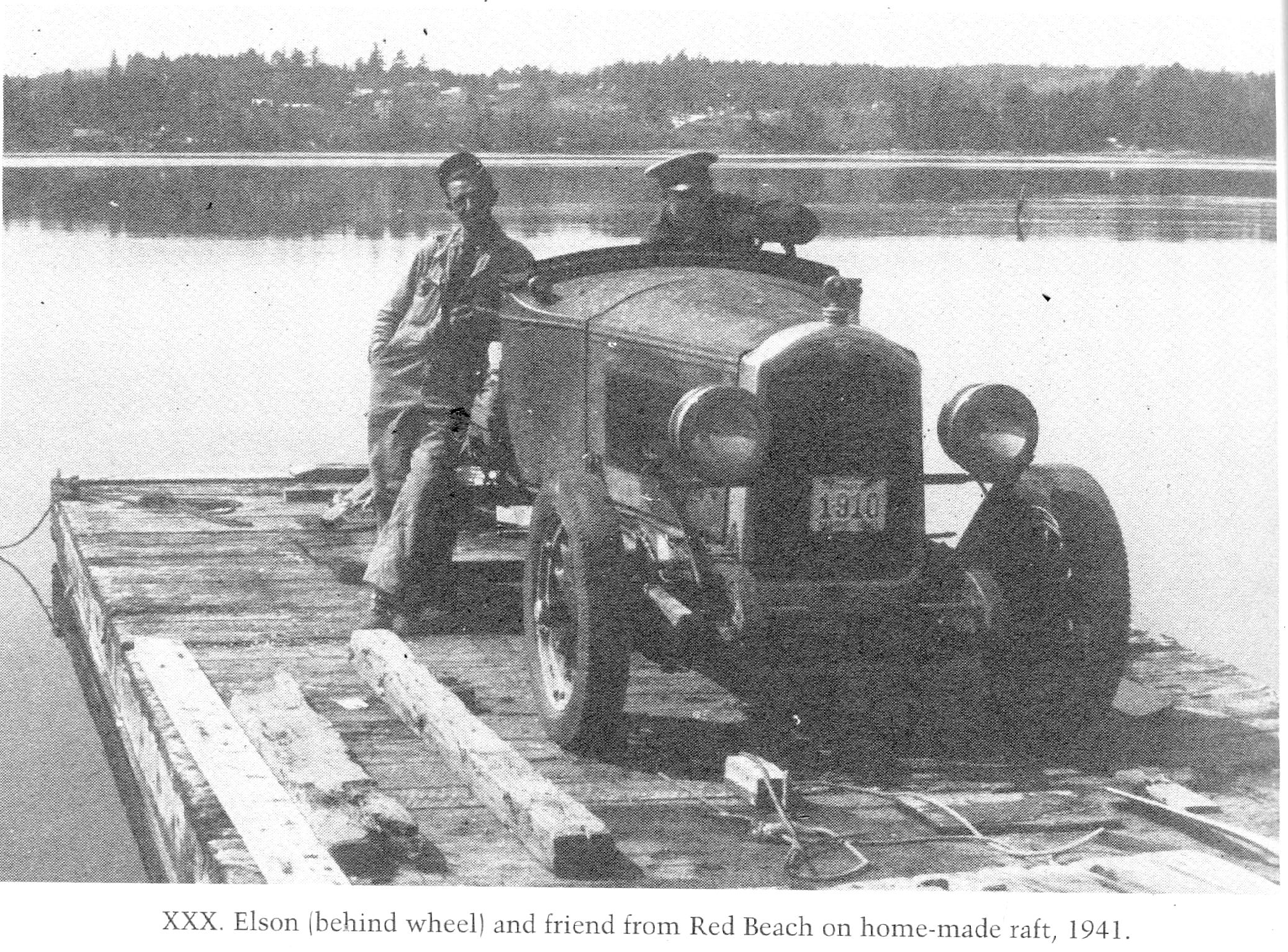 Elson Small and his wife Connie ended their 16 years as lighthouse keepers on St. Croix Island in 1946. Both were very popular in Calais and Red Beach. Connie wrote a book “The Lighthouse Keeper’s Wife” which is very well known and contains interesting accounts and observations on the life of a lighthouse keeper and family during the first half of the twentieth century. St. Croix Island was a plum position, not nearly as isolated as many lighthouse postings. The shore was close enough to reach with a home made raft and Elson could even take the cow to the vet if necessary. March 8, 1946 saw the opening of the Sears catalog store on Main Street, the Amazon of the day. True, the service was a bit slower, sometimes weeks and many trips to the store (Clerk: “It might be here Tuesday! But, then again, it might not.”) were required before your order arrived, but in those days it was still thought very convenient, especially as the alternative was a trip over the Airline to Bangor carrying 3 spare tires and a trunk full of green stamps to perhaps find no store in Bangor had what you wanted. The above photo is actually 1948 or 1949. The State Theatre, Unobskey’s and Western Auto can be seen down Main Street. The Amoco sign is hanging on the building now occupied by Peabody Insurance. The first clerks for Sears in Calais were Nellie Van Maluski, Florence Berry and Mona Harding. September 1946 marked the 40th year of paper making in Woodland. In 1946 only 11  men remain who were in the employ of the St. Croix Paper Company when the first newsprint came off the machines September 22, 1906. They were: Frank Burgess, Thaxter Downes, James Saunders, Joseph Aquino, Philip E. Bryant, Chase Cornish, James Tammaro, John T. Brown, Harry G. Foster, Albion Doten and William C. Brown. These men made up the 40-year veterans in 1946. The photo above is undated but it is certainly a very early photo of the paper makers in Woodland.

In other local news Ted Copeland opened the Baring airport, the Ferry Point Bridge was officially declared a bottleneck and slated for replacement (it ultimately took 10 years) and, according to the Calais Advertiser, October 23rd found the St Croix Country Club still very playable although golfers “who rely on the pitch and roll shot to the pin would do well to play the course now and get some practice with the deeper irons which lofts them closer to the pin and holds there, while the pitch and roll may skid anywhere if the greens are very fast”. We’re sure this makes sense to someone.