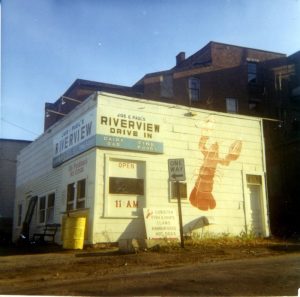 For those who don’t remember the Riverview Drive-In it was located on Union Street at the bottom of Salem, just below the Calais Federal Bank, and was owned and operated by Joe Driscoll and Paul Redding. Coincidentally the place is still a Drive-In, only folks get cash rather than pay cash there these days. The Calais Federal ATM and Drive Thru are built on the site of the Riverview. It operated only a short time in the late 1960’s and featured Dan Brennan as cook. 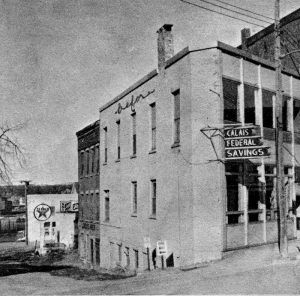 The Riverview Drive-In was a Texaco station before it was the Riverview. The Texaco and Schlitz signs are clearly visible in the photo above which was taken in 1965. This gas station was only one of about two dozen gas stations in Calais at the time. The EMEC Coop building can be seen behind the Texaco sign. We don’t know who owned the station. 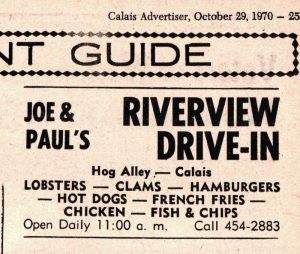 Not to start a huge controversy  but Tommy Brennan claims the Riverview had the best fish and chips in the St Croix Valley next to Wormel’s (Wormy’s) on Main Street. How many remember where Wormy’s was located? We have to say Frank and Randy’s on Water Street in St Stephen was a legitimate contender for the fish and chip title and we’re sure others have their own favorites. 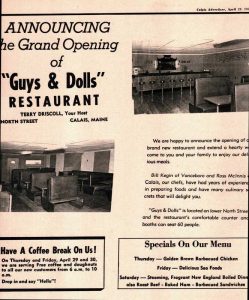 One of the memories the Riverview photo may trigger for many is the Guys and Dolls club just behind the Riverview. The Driscoll’s owned most of the property in back of the Calais Federal down to the corner of Union Street. This included a building about halfway down North Street from the corner of Main which the Driscoll’s opened as a restaurant and club called the Guys and Dolls. 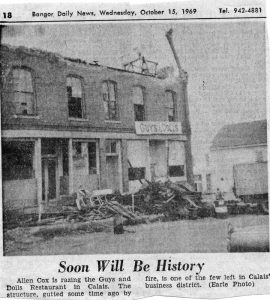 According to Paul Redding, he, Jeff Gagner, Joe Driscoll and George Matthews played there regularly until it burned in 1969. Paul says they were the “Villagers” at the time and later played at the lounge at the St Croix Hotel as “Court’s in Session.” In the 1963 photo below an earlier version of the Villagers included Martin White, Jeff Gagner, Greg Fales and Tom Driscoll. 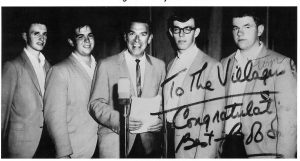 The Diablos shown below were another popular band of the era but we can’t say they ever played the Guys and Dolls. Of the Diablos Tom Brennan says:

The longest-running rock and roll band in the region includes (left to right) Ron Malloy, Don Malloy, Doug Archer, Steve Hill and Dave Beckett. They played regular Saturday night dances at the St Stephen laundrymat. Their signature final dance was Unchained Melody. Other favorites of the band were Don’t Let the Sun Catch You Crying, Whiter Shade of Pale, Light My Fire, The Sun Ain’t Gonna Shine Anymore, and many more great tunes peppered their show list. Another DIABLO favorite High On A Mountain of Love interestingly describes the compositional structure of this piece. We have been exceedingly fortunate to have the DIABLOS as an integral part of our musical heritage.

The fellow in the photo with the mike is Buffalo Bob Smith, not a band member but the owner of WQDY radio and better know as the lead character in the Howdy Doody Show of the 1950’s. 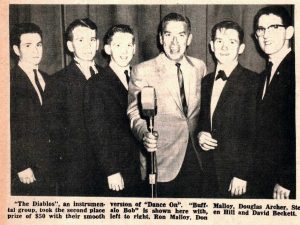 The Guys and Dolls, the Riverview and all the buildings on lower North Street are now gone but many of the members of both the Villagers and Diablos are still with us. Thanks for all those nights of good music and good times.