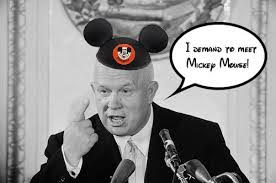 In 1959 two Communists came calling, reluctantly welcomed by an Eisenhower administration which would have been deliriously happy to see either or both of them overthrown by an angry mob of their own people. Pictured above is Nikita Khrushchev, leader of the Soviet Union and avowed enemy of all capitalist economic and political systems which he vowed to destroy but which he apparently wanted to visit before the coup de grace.  It was hard to deny Khrushchev a visit to the U.S as unappealing as the prospect was to Eisenhower. After all Richard Nixon, Eisenhower’s VP, had recently visited Moscow but Khrushchev was very unpopular with the American people and not without reason. The bombastic Khrushchev had his finger on the nuclear trigger and in 1959 the Soviets were ahead in the space race. We feared they might attach nuclear weapons to their rockets. Americans confidence was not bolstered by our attempt in 1959 to send Pioneer 4 in orbit around the moon but failed when the rocket missed the moon. As students we were taught to dive under our desks whenever we observed the bright flash of a nuclear explosion. The Calais Advertiser published an article in August of 1959 written by the Civil Defense director Leo Hoegh titled Hoegh Says Every Family Needs A Fallout Shelter because “In an atomic war, blast, heat and initial radiation could kill millions close to ground zero of the nuclear bursts”. However all was not lost he assured us. If we survived the blast and had a fallout shelter built to government specifications we might live to fight another day. Plans for the “Family Fallout Shelter” were available at the Civil Defense Office. 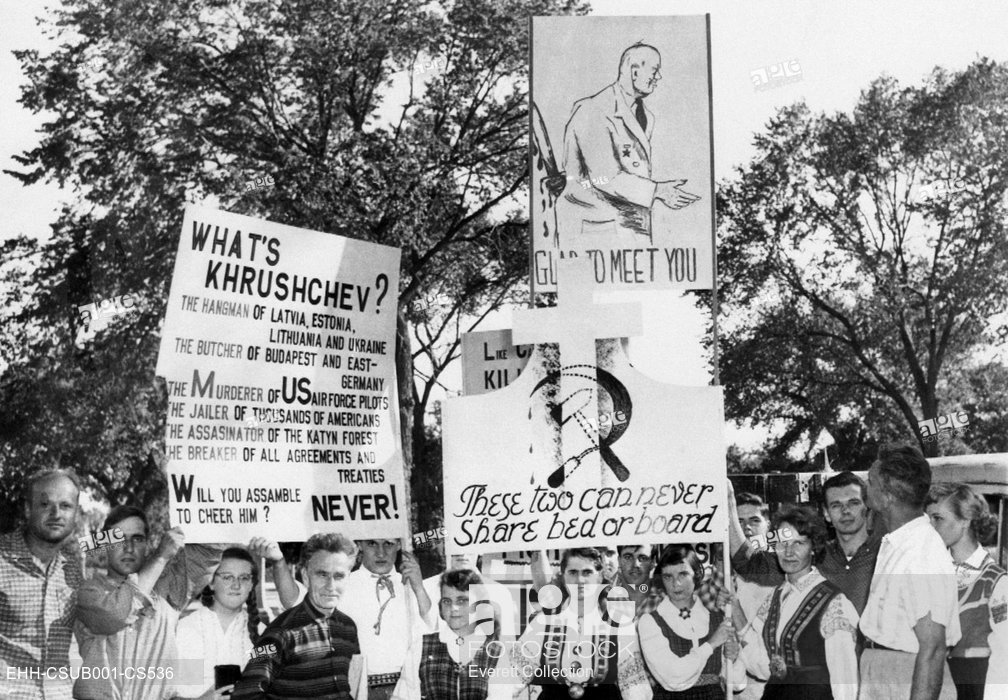 It’s little wonder we didn’t welcome Khrushchev with open arms. There were many protest like the one above which shows the Latvian Society of Iowa protesting Soviet Premier Khrushchev’s visit to Iowa, Sept. 12, 1959. Newspaper editorials were caustic and even his hosts in some places were barely civil. The trip reached a low point in LA where the mayor, a conservative Republican, thought it appropriate to score some political points by making “unpleasant noises” on Khrushchev’s arrival and along with the chief of police refused his request to visit Disneyland for “security reasons”. Khrushchev responded angrily:

We have come to this town where lives the cream of American art. And just imagine, I a Premier, a Soviet representative, when I came here to this city, I was given a plan — a program of what I was to be shown and whom I was to meet here.

But just now I was told that I could not go to Disneyland. I asked: ‘Why not?’ What is it, do you have rocket-launching pads there? I do not know.

And just listen — just listen to what I was told — to what reason I was told. We, which means the American authorities, cannot guarantee your security if you go there.

What is it? Is there an epidemic of cholera there or something? Or have gangsters taken over the place that can destroy me? Then what must I do? Commit suicide? This is the situation I am in — your guest. For me the situation is inconceivable. I cannot find words to explain this to my people.

Khrushchev threatened to fly home immediately but Secretary of State Dean Acheson managed to calm the irascible premier and Khrushchev completed his visit. The decision to refuse him a visit to Disneyland for security reasons was, in retrospect, probably wise. 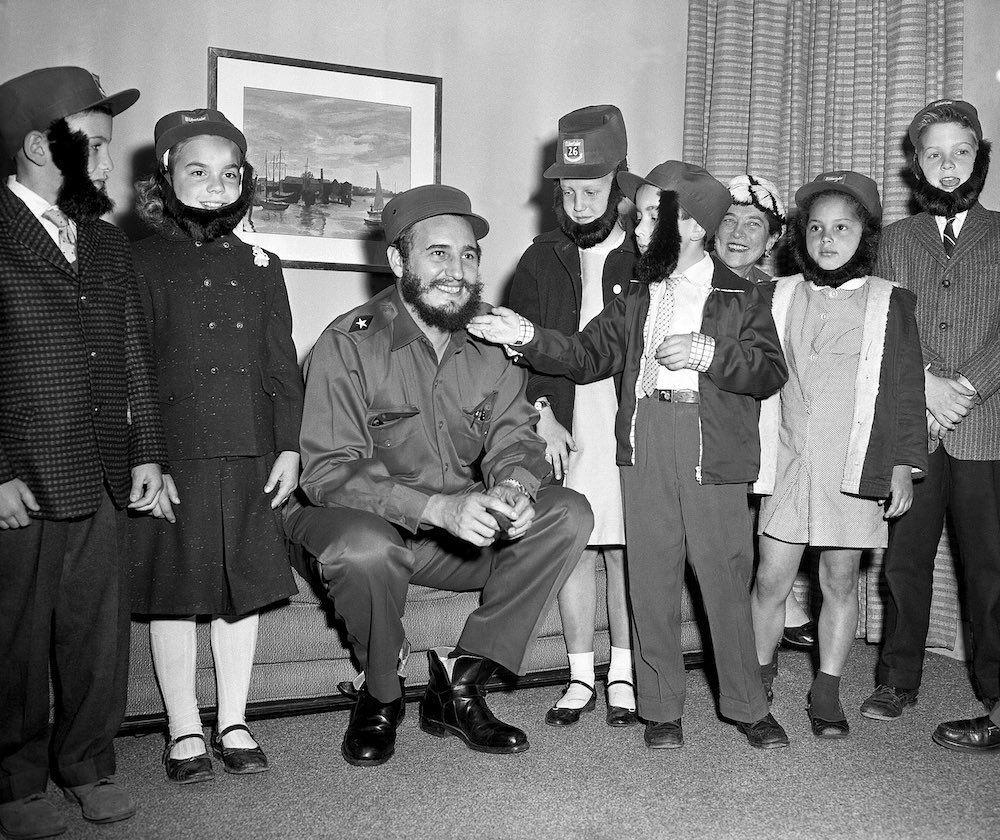 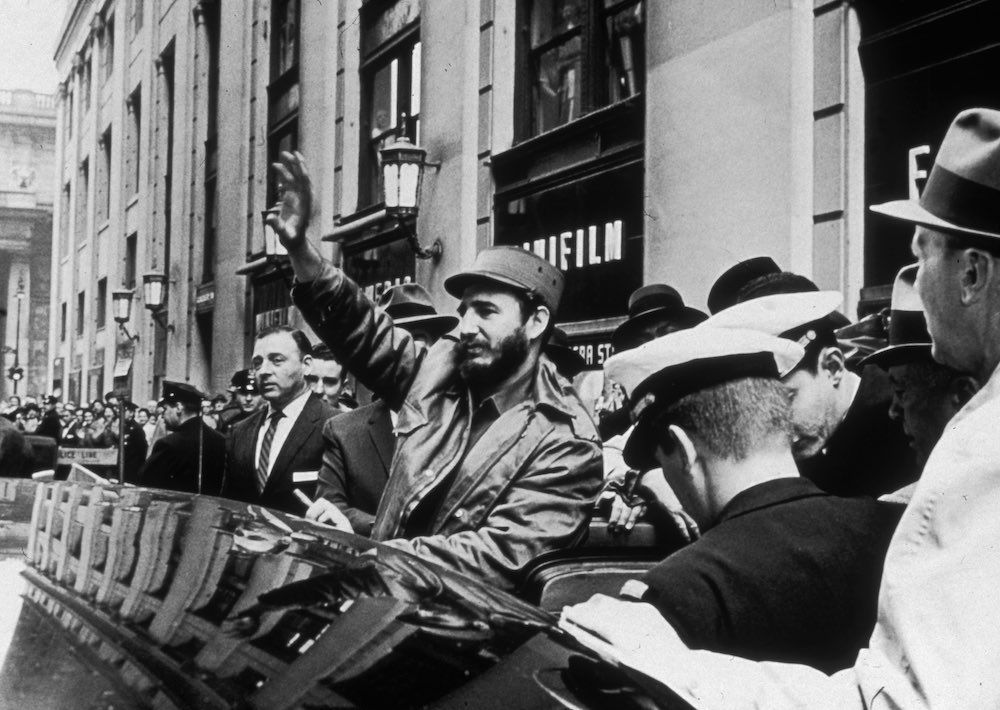 The other Communist to grace our shores in 1959 was Fidel Castro who had just overthrown Batista in Cuba and assumed the title of Presidente. Here was a different sort of communist. We forget the rapturous reception Fidel received in his 1959 good will tour of the US which, by the way, had formally recognized his government. He was as popular as a rock star to many Americans who detested Batista and huge crowds turned out to see Castro on his tour. Police had difficulty keeping crowds from breaching the barriers in front of his hotel in New York and other cities. School children sported false beards in his honor. Castro visited the grave site of George Washington and with much ceremony laid a wreath. Of course the Eisenhower administration knew Castro presented a serious problem and within months was drawing up the plans for the invasion of Cuba. These plans eventually landed on the desk of JFK who gave the go ahead for the attack we know as the Bay of Pigs. It was a decision he was not long in regretting.

In other US and international news of 1959 the Vatican issued an edict prohibiting Catholics from voting for communists, both Hawaii and Alaska were admitted to the Union and Eisenhower signed a bill creating the Food Stamp program. American Airlines introduced the first commercial transcontinental flight from LA to New York. A ticket cost $301. Pan Am began flights around the world. In Louisiana the Governor, Earl Long, was involuntarily committed to the state insane asylum by his wife and state officials after several alcohol and drug fueled tirades. He fired the director of the asylum and appointed a friend in his stead who pronounced Earl just fine and released him. The governor spent the next several days in a motel room with a stripper named Blaze Starr while plotting his reelection strategy. He lost although he ran successfully for Congress in 1960 but died before taking office.

In sports the early summer saw Red Sox fans celebrating- not because they were doing well but because for the first time in 20 years the hated Yankees were in last place. Sadly both teams were mediocre and finished near .500 although the Red Sox won the season series 14-9. The Boston Celtics won their 8th consecutive championship. At Wrigley Field in Chicago the Cardinals and Cubs added some spice to a boring, poorly attended game by, for the first and only time in baseball history, putting two baseballs in play at the same time.  Cardinals great Stan Musial was batting with a 3-1 count when he checked his swing on an inside pitch. The ball got by the catcher and ended up at the backstop. By rule this ball was still in play. Musial trotted to first base while the Cubs pitcher and catcher argued with the home plate umpire that the ball had ticked off Musial’s bat. The umpire ruled otherwise and handed the Cubs catcher another ball but in the meantime Musial, seeing everyone focused on the argument, dashed to second. The catcher, seeing Musial running, fired to second but airmailed the ball into center field. However the Cubs third baseman Alvin Dark had correctly assessed the situation and had retrieved the first ball from the backstop. Seeing Musial watching the second ball being chased by the center fielder and rounding second base with thoughts of heading to third he threw the first ball to Ernie Banks, the Cubs shortstop, who casually walked over to Musial and tagged him out. 20 minutes later the game resumed under protest by the Cardinals.

In other news of 1959 Bozo the Clown and Rocky and Friends premiered and Disney released Sleeping Beauty. Bob Dylan graduated from high school, Ford scrapped the Edsel and the parents of a Liverpool kid name Ringo Starr gave their son a set of drums for Christmas. 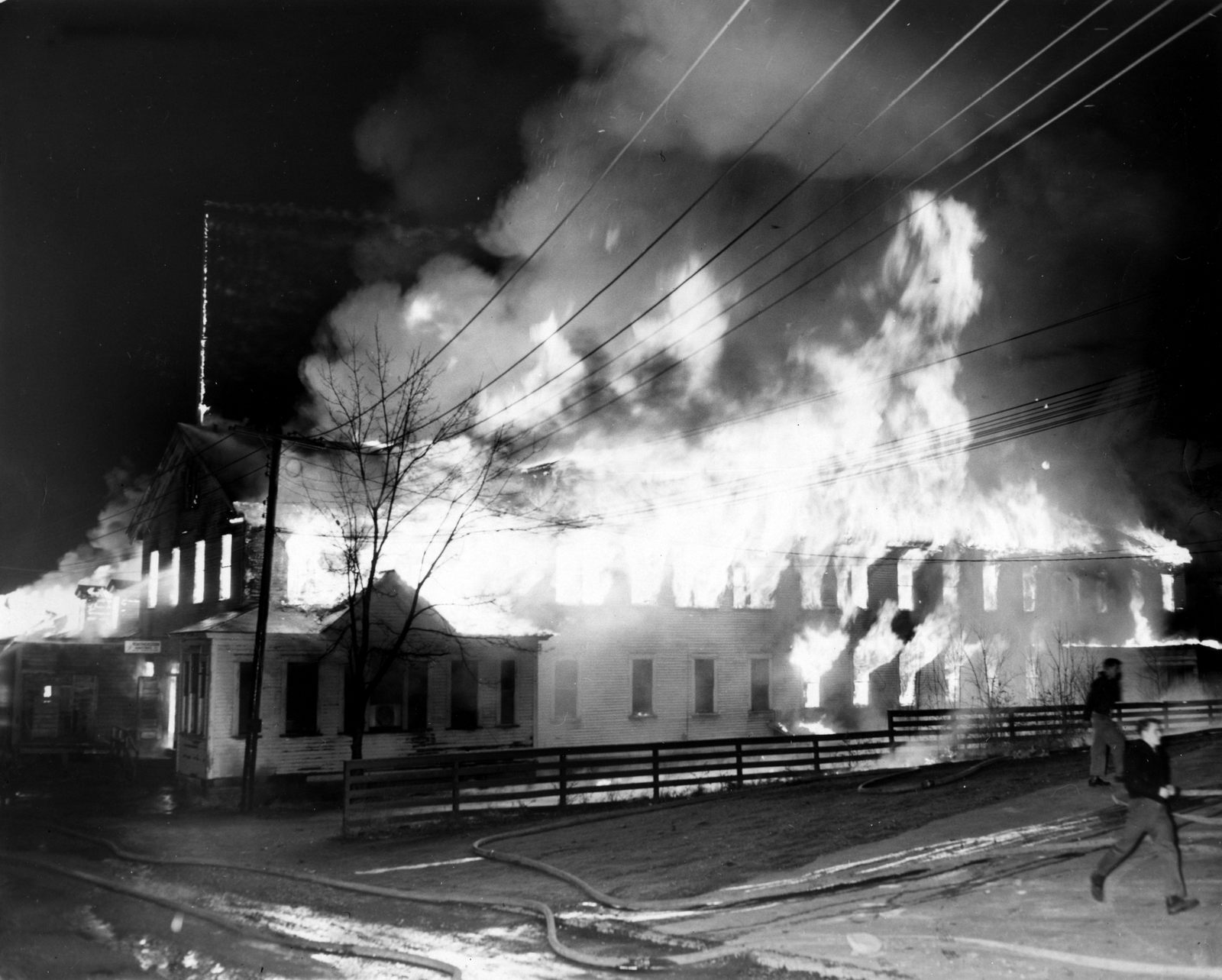 Calais was beset by fires in 1959. The most spectacular blaze was at the bottom of Barker Street where the old shoe factory burned in fire which could be seen even out on the ridges in St. Stephen. At the time the building was occupied by Larry Kobre’s Northeast Industries and the paints and varnishes on site fueled the flames. In a newspaper article in the Advertiser the Fire Chief of “Hard Luck Calais” commented on the rash of fires saying this one looked “highly suspicious” and he planned to meet with the State  arson director to discuss the situation. 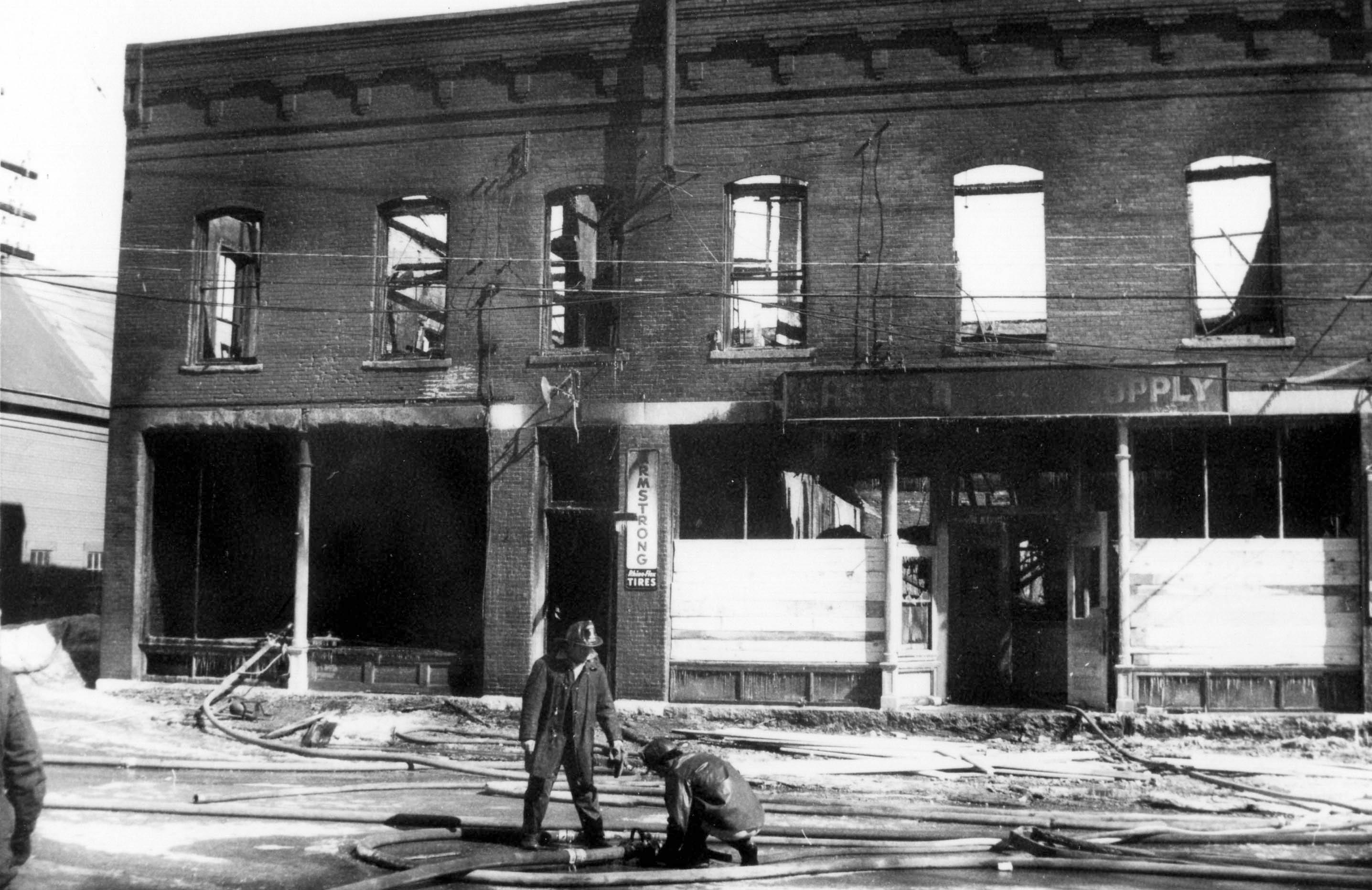 The deadliest fire of 1959 occurred at the bowling club at the bottom of Calais Avenue.

At the time of the fire, March 23, 1959, a portion of the downstairs was being rented out to Eastern Auto Supply. The left side of the building, street level, contained the bowling alley, the right side Eastern Auto and the upstairs the club rooms, card room, pool room, kitchen etc. Gordon Lord recalls bowling at the club the night of the fire but he went home early in the evening leaving a number of men at the club, including Doc Foster. Bunny Robb, Gary Frost, George Breen and Bernard Rigley were also at the club and all had gone upstairs to the club room. According to the newspaper report at about 11:30 the men realized smoke was coming up the stairway from the bowling alley. Bernard Rigley ran down the stairs and looked into the bowling alley through the glass door and saw flames. He opened the door onto the street just as the front windows of the building blew out in a terrific explosion and the entire building was engulfed in flames. Bernard and Tony Pisani, who owned the store across the street, ran to the outside fire escape in an attempt to help those on the second floor. Bunny Robb and Gary Frost were just then barreling down the fire escape, George Breen had jumped from the second story window into the alley next to the club, seriously injuring his back. Bernard and Tony Pisani ran up the fire escape calling Doc Foster’s name and heard Doc respond “I can’t make it” and Doc, who had survived the Bataan Death March, was right, the fire was just too intense. He died, according to the death certificate, in two minutes of the outbreak of the fire from smoke inhalation and second degree burns. 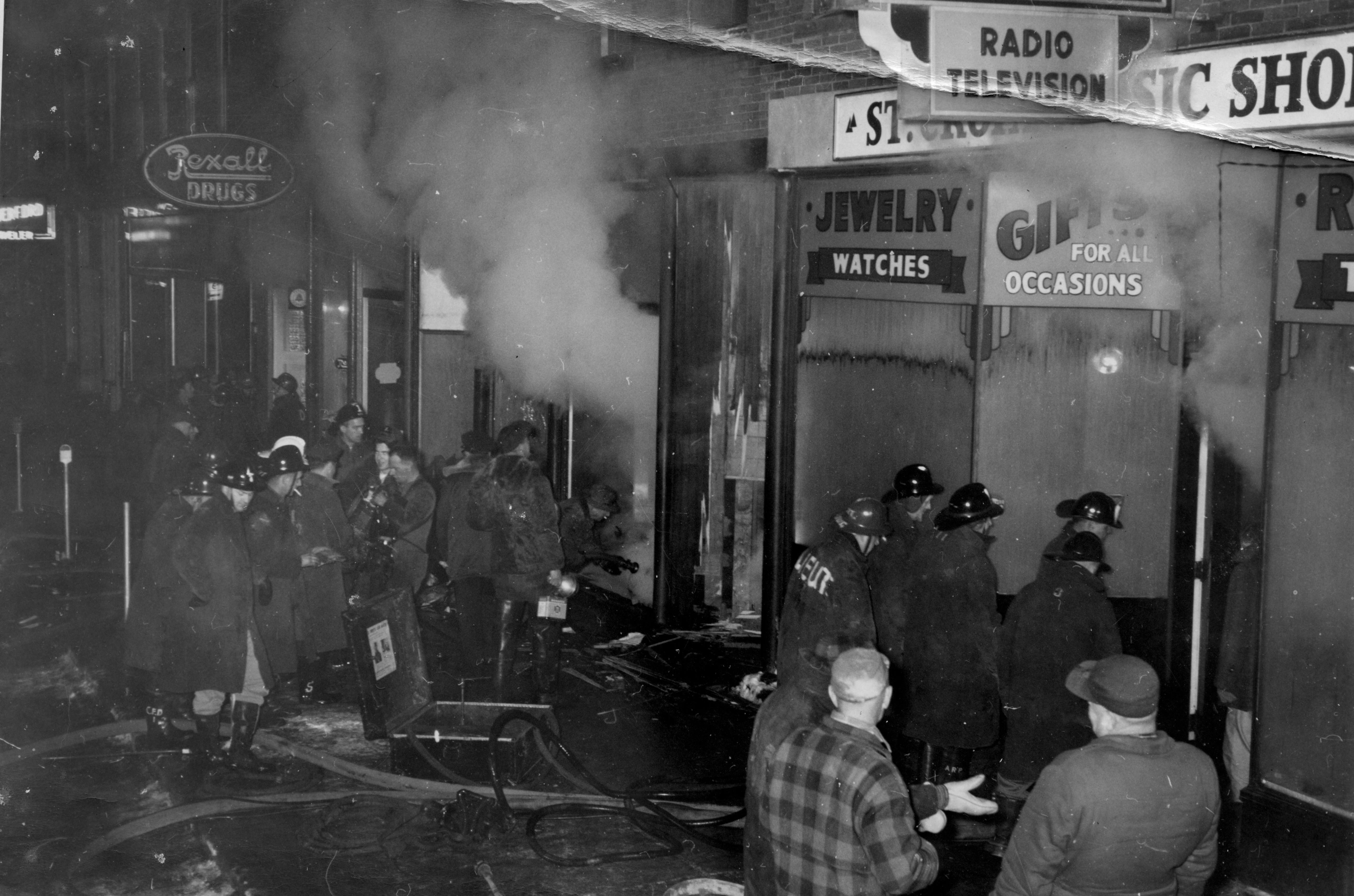 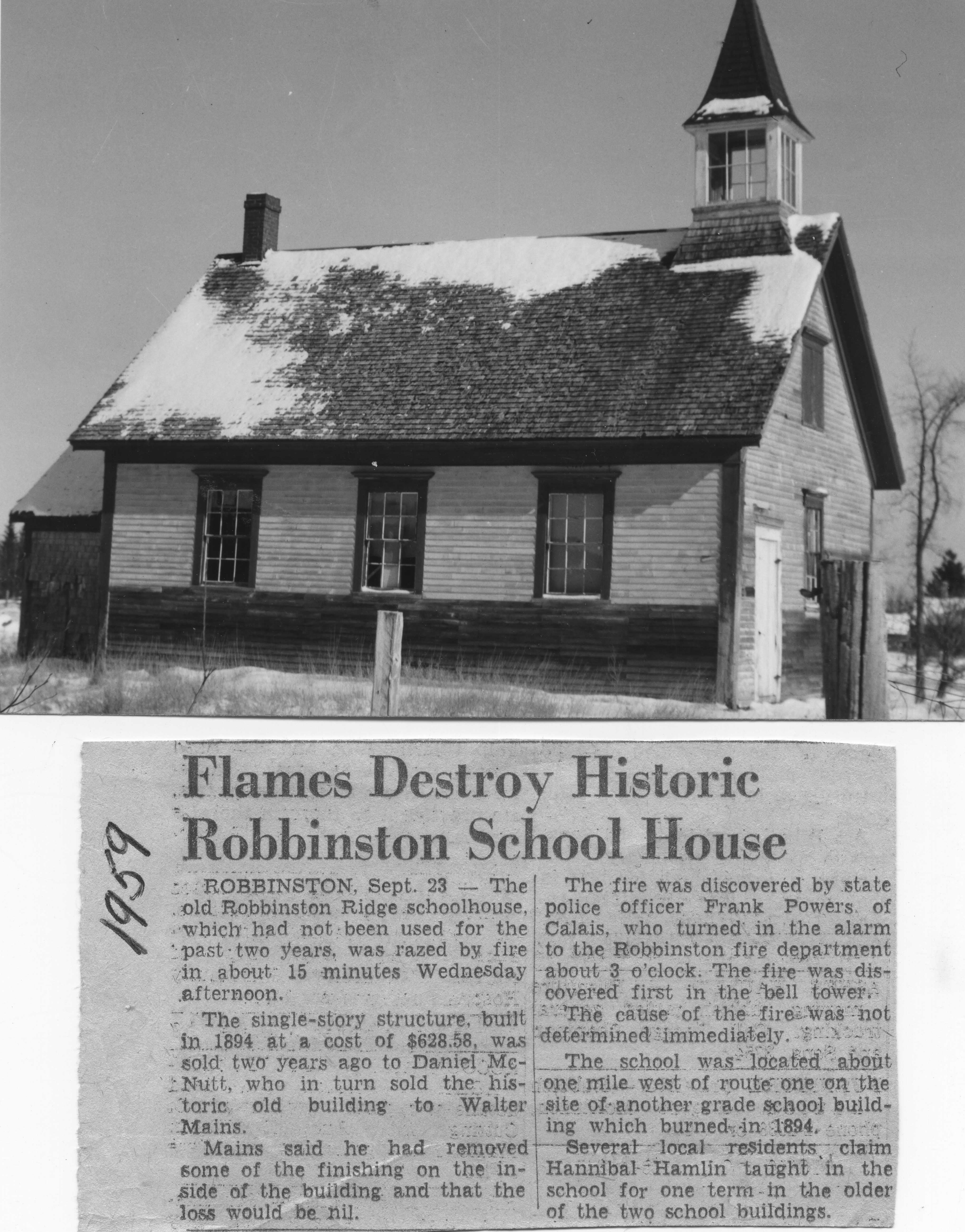 In Robbinston the Ridge School burned under very mysterious circumstances. Built at at cost of $628.50 it is said Hannibal Hamlin, future Vice President of the United States during the Civil War taught at the school in the early 1830’s. While it is true a Hannibal Hamlin taught at the school during this period it is unlikely it was the future Vice President. 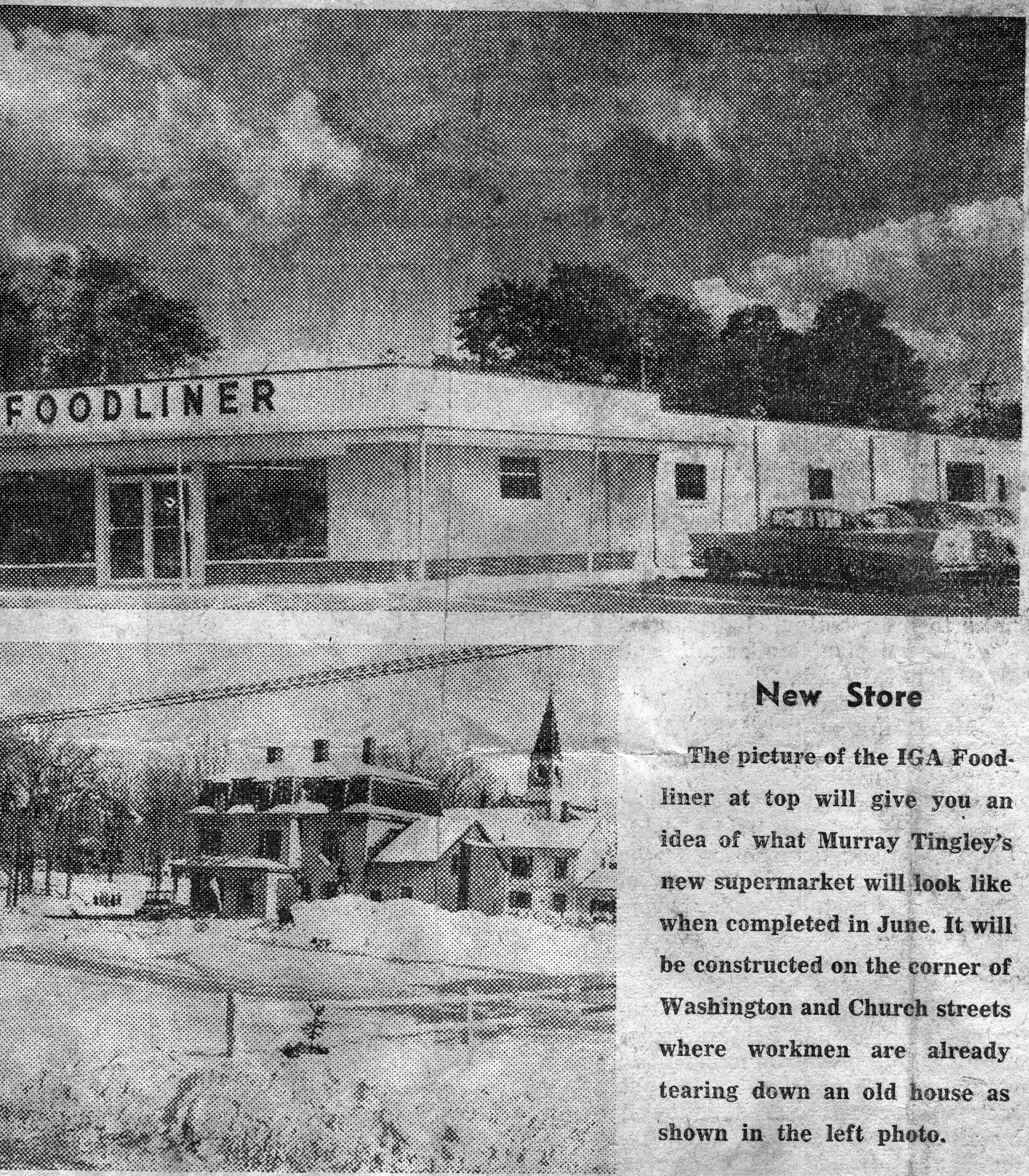 New businesses replaced old ones. The Washington Street IGA opened in 1959 and what a great location- its entrance was on a direct line with the exit from the High School. 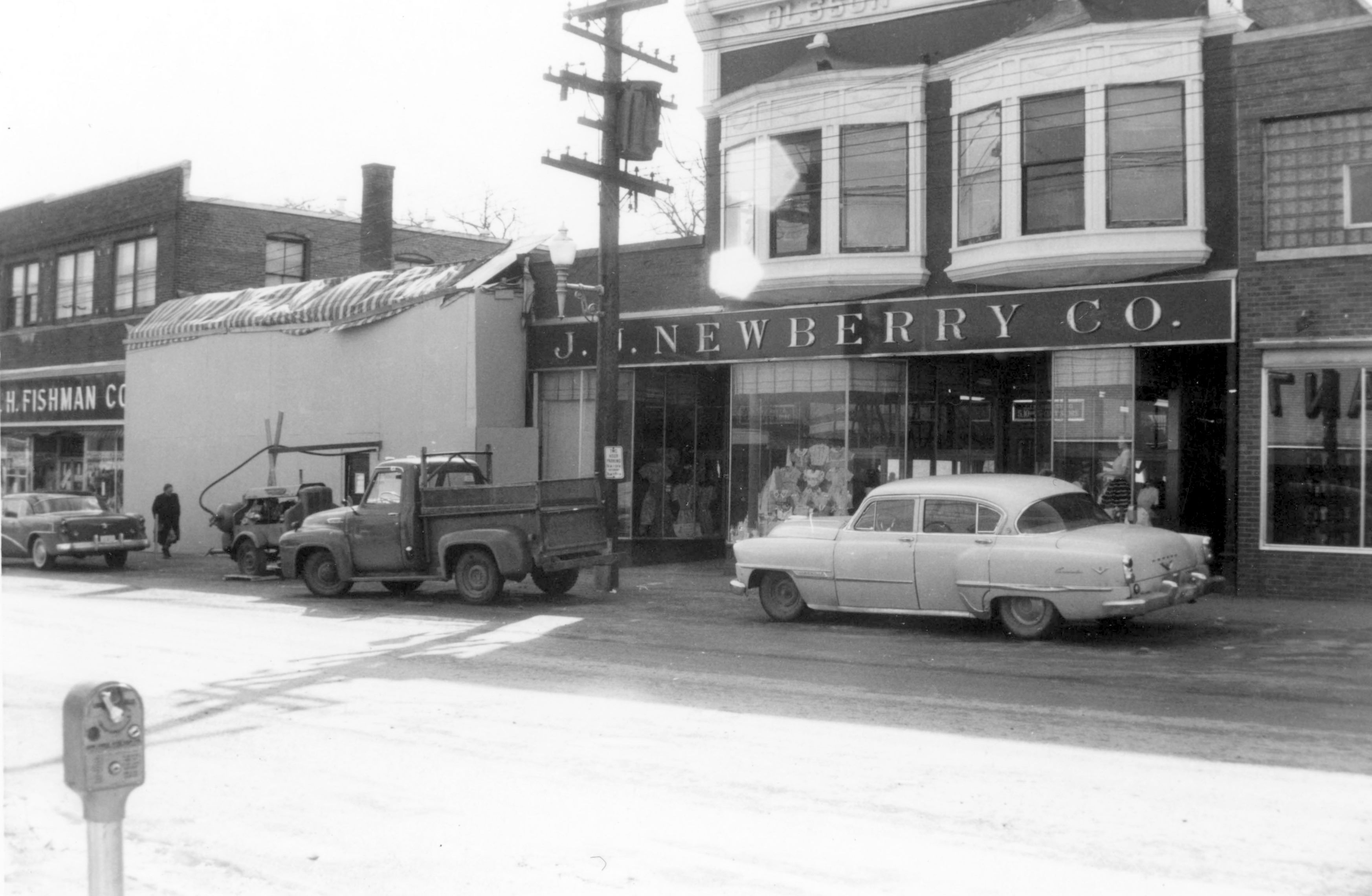 Newberry’s took over the Woolworth building and expanded in 1959 with its grand opening on July 2, 1959. 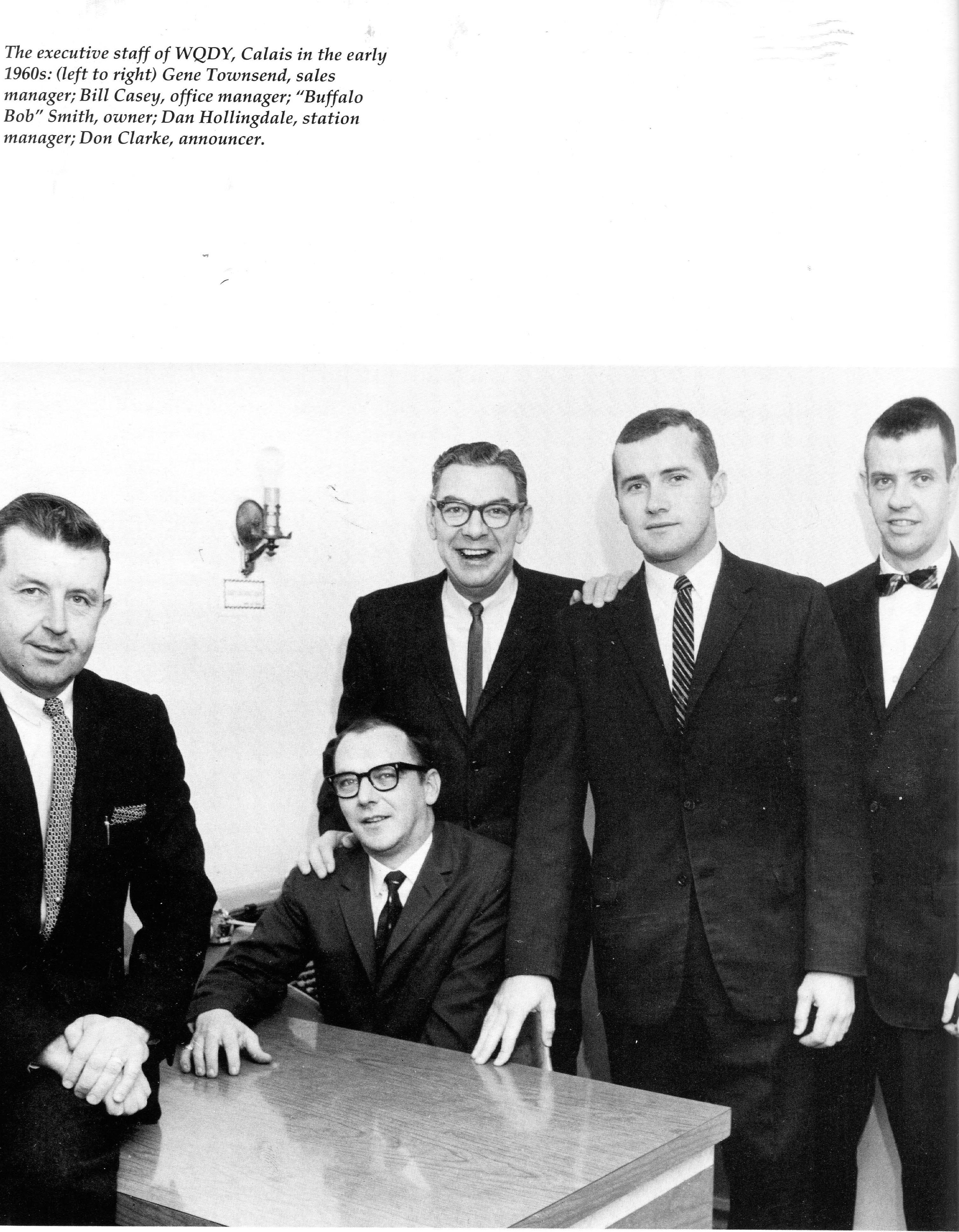 1230 on the radio dial went on the air late June 1959. The WQDY staff photo above is from the early 1960’s.  WQDY and The IGA remain in operation as does the Flakeboard in Milltown NB which began operation in 1959. 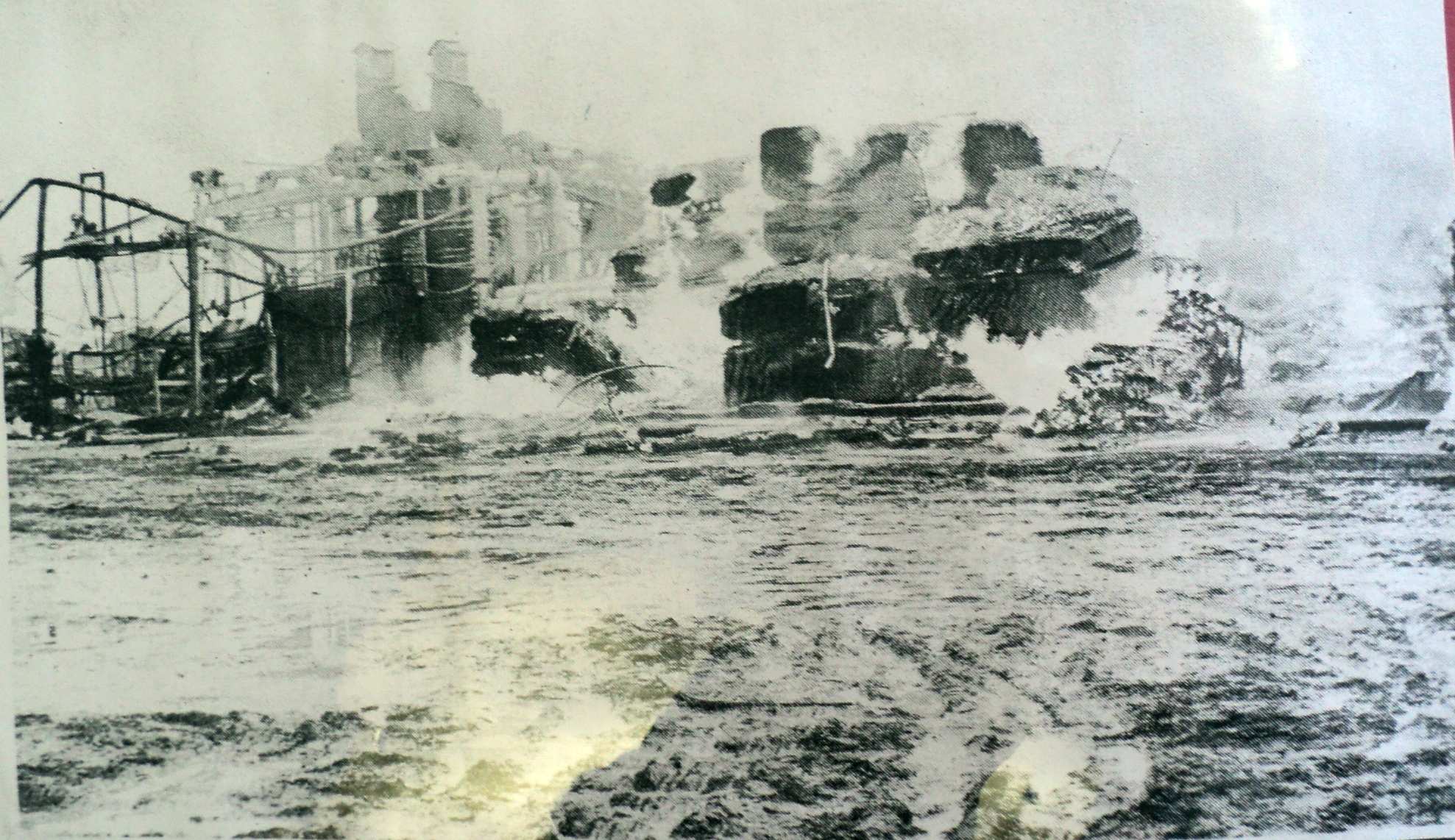 Flakeboard managed to recover from the major fire in 1974 and remains an important business in St. Stephen today . 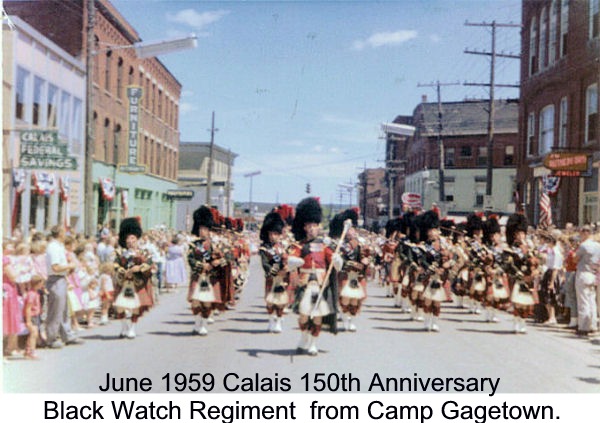 Finally Calais celebrated its 150th Anniversary in 1959 with a parade and other activities but the census results of 1959 were discouraging for the city. The figures marked the beginning of a substantial exodus of young people from the area. Calais had a population of 2605 in 1959, Milltown 924, River Road 414 and Red Beach 167, all significant declines from 1950. The Advertiser pointed out that births had exceeded deaths in Calais by 28 per year in the 50’s and the decreasing population was the result of out migration, mostly by young people- 172 20-24 year olds left during the decade. The Advertiser commented as follows:

Loss of this energetic segment  of the working force plus the loss of significant child-bearing potential is an unfortunate combination.”

As we are all aware the problem persist to this day.