It was the 1820’s before what passed as roads in the St Croix Valley were improved enough for stage travel.  According to Herb Silsby of Ellsworth:

“Prior to 1825 there were no stage coaches in Downeast Maine, because the roads were so terrible. After that date, however, the roads had improved to the point that it was possible for a carriage to get around pretty well.

There were three famous types of wagons and these coaches were really just glorified wagons. There was the Conestoga wagonthat was used to carry settlers on the westward journey to California and Oregon, Troy wagons, and the most famous of all, the Concord Coach.

The  Concord Coach, made in New Hampshire, was immediately very popular because it was so much more comfortable than the Troy wagons. This is the kind of carriage you see in all the old movies. They were rugged, and they kept improving them, so they were in use right up through World War I.

The first Concord Coach was built in 1828, and cost about $1400. They came in a variety of sizes. In the bigger ones, one passenger could sit next to the driver, six could sit inside, and you could load up the roof with more passengers in good weather. They used leather straps for springs. This wasn’t great, but it was wonderful compared to everything else.”

The photos above show the famous 1846 Bangor-Machias- Calais Concord coach which traveled the Shore Route (Bangor Ellsworth Machias Calais) for many decades.The history of this stagecoach would require a book but anyone interested in taking a ride in the coach could probably talk the owner into selling it for somewhere around a million dollars, its value on today’s market. It is currently in the Cowboy Museum in Wapiti Wyoming. 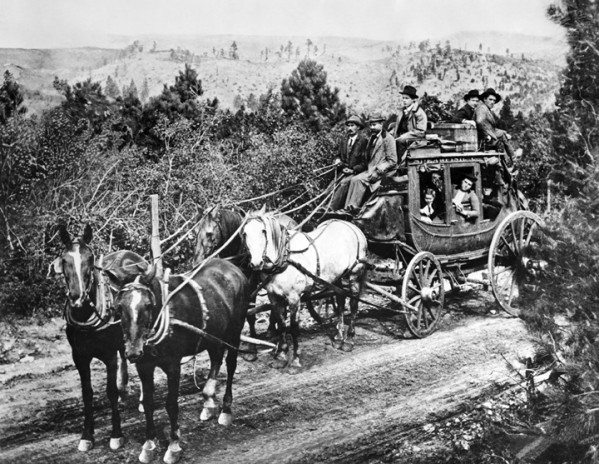 There was no such concept as “overbooking” during stagecoach days and passengers became pretty familiar with each other by the end of any stagecoach trip. The Shoreline Route from Ellsworth to Calais took 36 hours on average. To minimize friction some interesting rules of stagecoach etiquette were developed:

He will not request it unless absolutely necessary. If a team runs away, sit still and take your chances; if you jump, nine times out of ten you will be hurt.